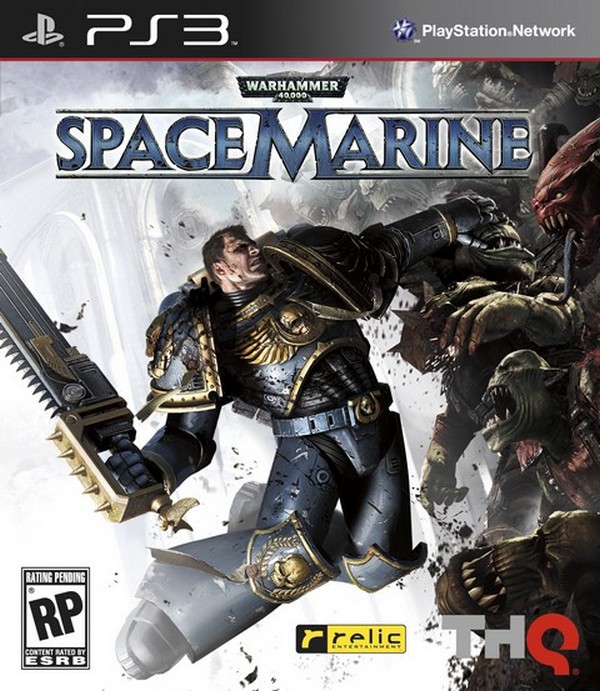 Difficulty played: Normal (only 3 settings and from what I can tell the hard is HARD)

After over a year of waiting and countless conversations with Jason about how he didn’t think the game was going to be good, Space Marine FINALLY came out.  If you read our last 2 articles about this game then you already know that this is a 3rd person action game made for the uber nerd like me.  But, can this game strike a nerve with the average gamer who doesn’t know anything about the back story?  Click READ MOAR to find out.

In short, I can answer that question as no, in long I can say maybe.  There are a lot of aspects to this game that people will love and additional items that may hinder some gamers from getting entranced in the story.  Whether people will love this game or not will be based entirely on their personal game preference.  But Eric, you say, isn’t every game like that?  Sure, a lot of games have a dependency on player perception of the story and the characters, but I don’t think that I have played a game that walked the line so much as this one does.  The 40k universe plays out a little differently than some players not accustomed to the lore would think.  Sure, it’s in the far distant future, and very sci-fi, but the dialogue is different than most would think.  The Ultra Marines tend to speak in proper English,  almost as if in mid evil times and the Orks all sound like they could be pirates plundering the 7 seas.  This is all intentional, however because all of the established lore encompasses this.  You play as Captain Titus, a leader of the Uber elite Ultra Marine squadron of the Space Marine Army.  You’re dispatched to a forge world, the place that the Space Marine Tech-Priests build many weapons including the Titans (colossal moving fortresses that can decimate entire planets), because it has been overrun by an Ork army.  Your task is to make sure that the Titan Invictus does not fall in to Ork hands, but the story quickly takes a turn away from this portion of the plot.  I don’t want to give away too much of the story so I will stop there. 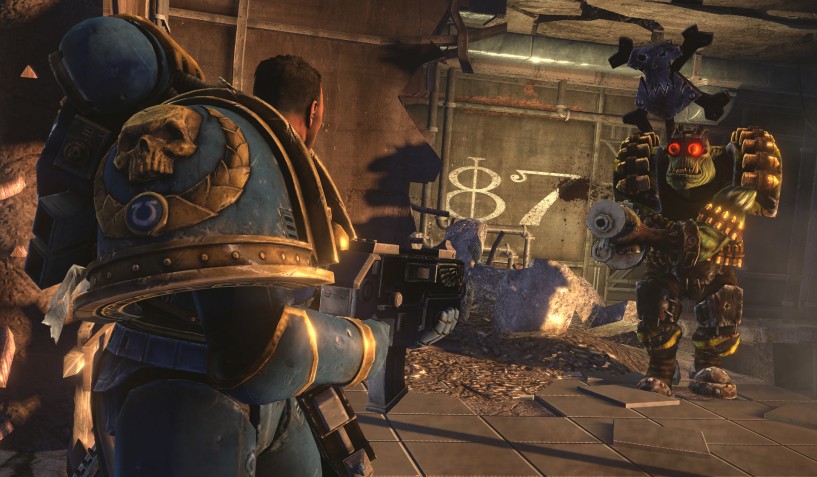 First off, let’s talk visuals.  Blood, lots and lots and LOTS of blood, buckets of blood, if you will.  That’s one of the ways to describe the visuals of this game.  Sure, the landscapes and destroyed building look good (and quite frankly are impressive in my opinion), there is even a lot of environmental damage that you can inflict with the varying weapons but the blood ultimately is what you will spend a lot of your time seeing (in rather large quantities too).  Every move that you make causes large amounts of blood to be strewn throughout the battlefield, and realistically this is one of the things that are a central focal point in the Warhammer 40k universe.  Almost every weapon that a Space Marine wields is designed to cause as much damage as possible to the enemy.  Considering the fact that average human is much smaller in size than some of the creatures they are at war with, it’s not that surprising.  Take the standard bolter that is the first extra gun you pick up in the game, its caliber rating is .75… from a machine gun.  In contrast, a .50 caliber machine gun is normally mounted on a truck and way to unwieldy for a normal person to carry.  The kicker is that they even give you a Heavy Bolter to carry, which is a super high speed 1 caliber machine gun (that the marine can still carry around the battle field), and a Double Barreled Bolter as guns you carry throughout the game (these aren’t ordinary rounds either, click HERE if you wish to read more about their construction and why they cause so much damage).  You also use 4 different melee weapons throughout the game; these are the items that cause the most bloodshed and are the attacks will pretty much cover the entire screen. 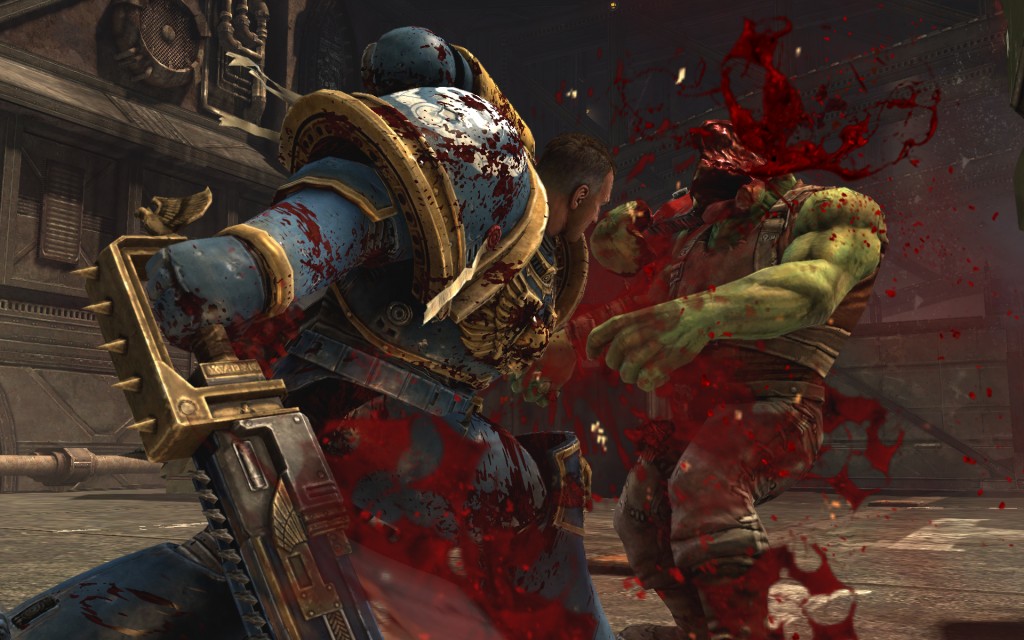 The kicker, and one of the reasons why I say that blood shed is a focal point of this game, is that there is no health kits or stim packs strewn about anywhere in the game.  Enemies don’t drop health pellets and only your shield auto regenerates.  So how do you regenerate your health?  By stunning any enemy you can find and completing a vicious melee that energizes him so much that he heals himself.  It’s a great concept, and they do a good job of changing up the death sequences by making it different for every enemy and weapon combo (there are 4 different melee weapons, 5 if you played the PSN released Kill Team) you can come up with, but there is one flaw to this that I can’t believe they didn’t rectify in early game testing; you can still be attacked and injured while completing these sequences.  This creates a HUGE headache during the game play as the 2-3 second sequence leaves you wide open, which is not very good.  I experienced many great pains during the final boss battle because every character had a machine gun and I died multiple times while trying to regenerate health.  Sure, when you activate Fury mode you regenerate health, but it doesn’t regenerate faster than the enemy can shoot you and your shield won’t regenerate until you haven’t been hit or shot for a few seconds.  I really wish that they would have made some minor tweaks to health regeneration either having health packs around, making every kill regenerate your health or at least turned off collision when you were doing your health melee kills.  Don’t get me wrong, it’s very satisfying to pick up an ork, throw them to the ground and then crush their head with your enormous foot, or restrain a legion of chaos and gruesomely slit their throat with your chain sword, but they should have made the health regeneration better. 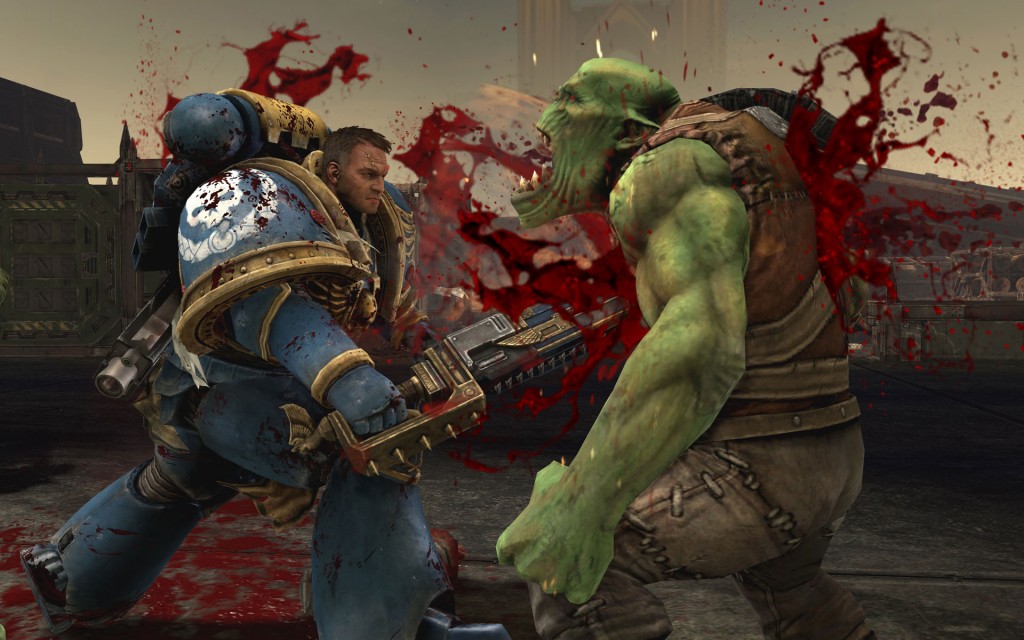 This is the section where I would talk about the online game play, but unfortunately I could never get in to a match.  I tried multiple times to connect to the online servers, but could never actually get a game to populate (once the game even froze).  I did receive an error once that said my NAT setting may hinder a game, but I’ve never had an issue with this before on other online games.  I was really looking forward to being able to customize my online Space Marine or Chaos Marine, much like you can with the table top characters, but alas I could not.  Granted, I don’t actually play too much online, so it’s not that big of a let down for me, but it made it so that I could not try to get a lot of the available trophies.  That brings up a good point too, game developers should stop making the bulk of trophies for online only.  It’s a pain in the ass when there is a platinum trophy for obtaining all trophies but I have to play with a bunch of retarded Bros online to get it.  What also would have made this game a lot better is online or side by side co-op.  I realize that it takes a lot more time to build a game designed to do this, and there is always the possibility that there are a lot of loner gamers, but but it adds more fun to the game if you buddy can take the form of one of the 2 other Ultra Marines that are with you most of the game. 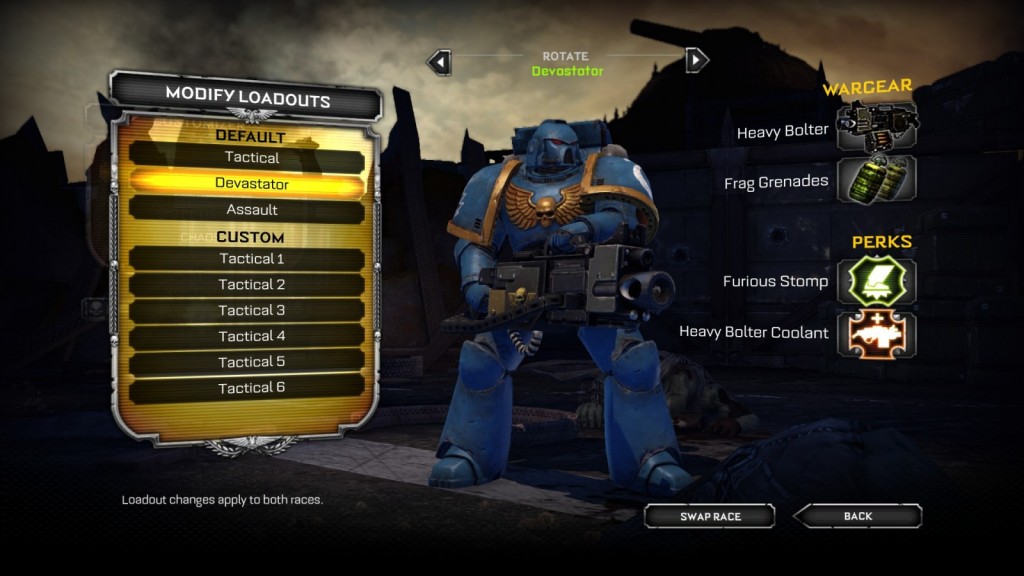 All in all, the game was good and I thoroughly enjoyed playing it.  I feel good paying the $60 for the game, especially since I can trade it back to GameStop soon for a good trade-in amount, but I’m not sure that it will be a good enough value for a gamer that knows nothing of WH40k.  Granted if the online play is as satisfying as the rest of the game this may increase it’s value, but I was unable to experience this so I cannot add that to the equation.  Either way I’m happy that this game finally came out,  and it did engross my spare time for a week or so, so I’m proud to proclaim that I BEAT IT FIRST!