Sony has just announced a partnership with AMC Theaters to put Uncharted 3 in to the hands and eyes of gamers early, in 3d… AND ON A FREAKING THEATER SCREEN!  Click READ MOAR for more deets.

That’s right, some lucky gamers in 5 chosen cities will be able to play the game early on a movie theater screen.  The events will take place between October 18 and 20th, allowing viewing of the game, multiplayer battles and a meet and greet with many Naughty Dog employees to talk about their favorite parts of the game.  Regular passes will be $25 and include admission to the venue and the chance to win Sony prizes, however the great deal will be the $60 premium passes.  The premium pass gets you the game before it’s actual release (that you will have shipped to you starting 10/25/2011) which is probably the greatest preorder value there is.  Unfortunately, I don’t live in one of the 5 cities but if you do you should try to check this event out.  The 5 cities and theaters are: 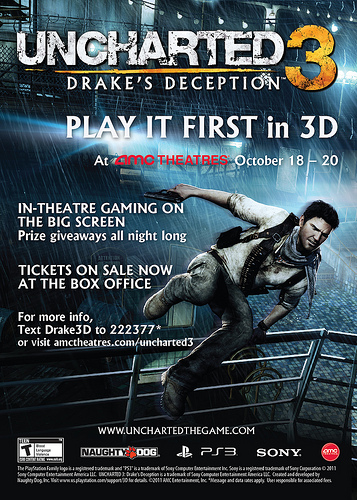 Check out http://www.amctheatres.com/uncharted3/ for more details