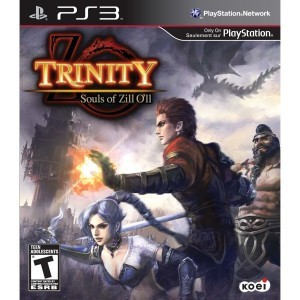 With the addition of this game, and some of the other games that I’ve reviewed on this site, we might need to add a new category called “WTF is Eric Playing Now?!?!?!”.  The small amount of back story on this particular game is pretty much that Jason and I decided to make a trip to Game Stop one Saturday, in hopes of finding something fun for a good price.  After diving in the Bargain Bin for a little while I stumbled upon this game produced by Koei, the makers of the Dynasty Warriors franchise I used to play the shit out of for years.  Being their first foray in to the RPG realm (and being known for decent game play and graphics), I decided to give it a try.  What follows is take on a game that most people haven’t heard of and even fewer people have played.

Let me a elaborate a little on that last statement; most people haven’t heard of = it’s very hard to find a review for this game at all (although there was a bit of development news on the internet), even fewer people have played = so few people have played this game that there isn’t even a FAQ for it on GameFAQS (and I have played some obscure shit that had at least managed to pull together at least 1 FAQ, if not 2).  I didn’t really look for any of this before I purchased the game but I did do a little digging after I started playing because I was interested to see how many people had played this game before.  I thought that this was going to be a short play and easy review… boy was I wrong. 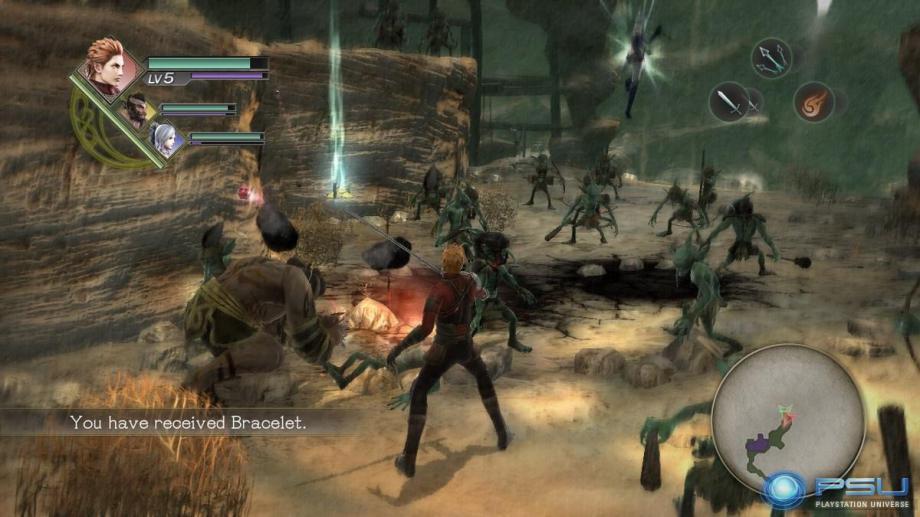 The game has a very interesting presentation that is different from your traditional Action RPG.  The dungeon exploration is like playing Dynasty Warriors/Samurai Warriors with less enemies on the screen, but you assign each button to swapable abilities (except for X which is the jump button).  You start off with only a few abilities at first but you begin to pick up more as your “Souls” evolve (I see what you did there).  I think one of the best features that you can play with early on is the use of Fire and Ice in the levels.  Come across a section of standing water with enemies in it?  Cast ice and the area around you will freeze over and possibly freeze the bad guys as well.  Running through a dry forest area, come across rolling tumbleweeds, or enter in to a place where flammable gas gushes from sorts of areas (I swear there is an entire level filled with the latter)?  Cast fire and watch the world burn/explode in a wall of flames.  Sure the novelty starts to wear off after a bit, but the fact that you can use them in your strategies throughout the game was a nice touch.

There is a ton of customization that can be done to your character via armor, accessories, and weapons, and boy will you get a lot of them.  Enemies dropped tons of items but I found myself getting extremely irritated with the game because it felt almost random that I would get one that was actually better than what I currently had equipped (pickup item, check stats, get pissed and almost throw the controller, repeat).  However, I setting me up for anger made the occasional acquiring of a better item seem like more of an accomplishment than it really was.  All in all the movement worked well and abililities were solid and fluid, and the weapon/armor choices were manageable, but the biggest problem with this game is to follow.

OH MY GOD THE STORY!!!!!  Or should I say lack there of story?!  Seriously, story progression was pretty much non-existent for many parts of the game.  Most of your time while playing is spent doing side-quests, in fact it’s so prevalent through out the game that they should jsut change the name to SIDE-QUESTS SIDE-QUESTS SIDE-QUESTS.  Seriously though it’s like the dev team only really liked ICO because it was one giant escort mission or only played Ocarina of Time so that they could go through the laboring task of obtaining the Biggoron Sword.  All kidding aside, this was not really what I expected from a Japanese made RPG but should have been from what I know of other Koei games.  Koei has never been what I would consider a great story telling developer, as games like Dynasty Warriors, Samurai Warriors, and Red Sea can attest.  Koei has always been about developing the graphics and action mechanics first, and then trying to add some semblance of a story on second.  If you don’t believe me, ask yourself this; why does Koei keep making more and more Dynasty Warriors games instead of moving the game play to even more stories?  Because they can continue to rehash the same story over and over and over again.  You might try to talk about Dynasty Warriors: Gundam, One Piece: Pirate Warriors (which I’m looking forward to it’s US release), or Warriors Orochi, but c’mon the first 2 are stories developed by other and the 3 had a wretchedly horrible story.  The thought might be that by the company now being TecmoKoei their story presentation might get better, but I haven’t seen any evidence of that and I’m fine with that.

In spite of all of that, for some unknown god-forsaken reason, I could not stop playing the game.  You think I’m joking but I’m not, I spent over a month on this game, putting in at least 10 hours a week (more than likely more) just grinding my way through Adventurer Guild missions and killing tons of monsters.  Maybe it’s because it plays like Dynasty Warriors or because every once in a while I would get to fell a huge dragon, I’m not sure.  All I know is that right before I got to the end of the game I unlocked a 50 level challenge tower and it took all my strength to end the game, rather than conquering the tower, so that I could write this article.  Of course my shear will power died because I finished the game last week and am just now writing this article because I spent most of the weekend getting to Level 50 in the tower only to fail repeatedly because the damn dragon at the end was stronger than my characters.  I’m only a few trophies away from a Platinum though so I will more than likely try again.

There isn’t much to complain about here; while none of it was so amazing that I could gush for hours (and of course not as good as a SquEnix game), the both were solid.  Textures were good, lighting effects were decent and I almost never experienced any form of clipping at all.  The only weird item was an odd filter that they had as an overlay for everything at times, I think they were trying for a painted canvas effect but it could have been used to masque slow processing of textures.  Either way though, the graphics were decent.  Music was actually pretty good too, even after playing the same levels over and over again for hours.  I guess the only song that I hated in the game was the “serious drama” song (as I call it) which is basically Celtic Elvish (I think) vocals used during “serious” parts of the story, like when the big-tittied bounty hunter who tries to capture you, and magically falls in love with you, is abruptly killed (but we discussed weak story already).

The only other thing to say about the sound was that there was a decided lack of voice over.  Sure, there was voice acting in some of the cut scenes, but the rest of the story and side quest instructions was splayed out in text; lots and lots of text.  This is funny because they tried to add a lot of history to the continent the story takes place in, but it felt as if you could go through most of the game without ever seeing most of it and not even care.

This game has left me conflicted, I enjoyed playing it but I have absolutely no idea why.  It might be because this felt like a good natural progression to Dynasty Warriors, but I’m not sure.  All in all, if you can find it dirt cheap in the bargain bin, and want to just grind your way in to oblivion, by all means pick this one up.  Just remember that no matter how much you play it, I BEAT IT FIRST!

One thought on “Trinity: Souls of Zill O’ll”