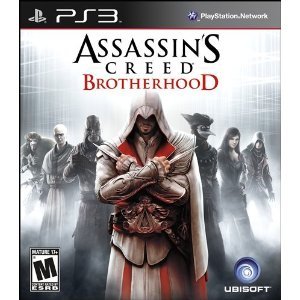 Yes I am a little behind on the Assassins Creed timeline but seeing the trailers for Assassins Creed 3 made me want to get all caught up.  I have loved the past two AC games and even got a platinum trophy in Assassins Creed 2 so I was more than happy to keep going and  continue my murder streak of 15th century guards and “important people”.

Game Play: Obviously if you are reading this or have played any of the other AC games out there you know exactly how this one plays out.. run from rooftop to rooftop killing people and jumping from crazy heights to land safely in 3 feet of hay. AC: Brotherhood is no different, the only major changes in this time around is that you are helping rebuild ALL of Rome (not just your small village) and now there is some emphasis on you creating a bigger guild of Assassins. More on these later. Also this is the First AC game to only focus on one major city, obviously the city of Rome is big enough to handle this task but the scenery  does gets old after awhile.

Story: The story picks up right at the end of Assassins Creed 2 and shows the typical “how you lose everything you worked so hard to get in the last game” scenario (Eric’s favorite thing). Long story short Ezio is run out of his little town of Monteriggioni and is now trying to get revenge on the popes family in Rome.  Poor and powerless, it is up to Ezio to use his “skills” to get closer to who he needs to kill.   New in AC:B, while playing as Ezio you could exit the Animus at any time and talk to Rebecca, Lucy or Shaun, actually get a chance to run around as Desmond and even read emails from the team. This is cool and all but it is ultimately worthless. Outside of the Animus Desmond is dealing more with the stresses of having to “work” to find the Apple of Eden IRL, the progression of Desmond’s story has always taken a back seat in the grand sense of past AC games but they at least progressed I cant say the same for AC:B.  At the end of AC:B there was a eventually major event, but everything else was pointless (pun intended).   Even most of the emails are just time wasters and running around outside is neat but what is the damn point?

“Oh Jason there are 5 hidden things you can find while playing as Desmond.”

So Fucking what?! What do they do? NOTHING! Shit the game even gives you a trophy for only finding 1 of the 5 items and nothing for finding all 5…WHYYYYY?  And when you do get all 5 items all you can do is look at them, and not even closely, just look at them on a shelf…oohhh items.

At least by talking to your team mates you get a little more back story on them..sorta.

Now that I’m thinking about it, I also gotta say that as far as total story goes, AC:B is probably the weakest the entire series. The entire reason for this game in the grand scheme of the AC universe is to find the current location of the apple.  I even didn’t really care for the main bad guys either and even the final battle felt empty (most likely because it is all used again in AC:R)

Graphics/Sound: I have always enjoyed the visual style of the AC games and this one does not disappoint. However, I personally found the Rome countryside rather bland compared to the multiple cities in AC2 but having a bigger area to play in was still fun. One thing I did notice is the pop up was really bad its been awhile since I played AC2 but I do not remember the popup being so bad, more on this later as well. The music as usual is a perfect blend between 15th century lutes and 21st century techno almost right up my alley. Sound effects are still as good as in past games, but pulling off a combo with your hidden gun is the most satisfying, especially in a crowded area.

Gripes: Ok I have a lot of gripes on this game but don’t take that as a bad thing, it just shows how much I liked the game and the entire Assassins Creed universe.

Items: New to AC:B were small loot items that you could sell to stores for extra cash or keep to turn in for side quests. This was neat idea but I feel like it was implemented horribly. Especially when a store would withhold selling a certain item to you because you don’t have a certain item to give them.

Shopkeeper: “Oh you want this sword? Well, I’ll sell it to you if you can bring me some Tomatos, Coffee beans and a Shrunken head.”
Ezio: “I do not have your Shrunken head, (lord knows why a blacksmith needs one) but I do own your store and I have 1000000 florins, how about I give you ALL OF MY MONEY for that one sword?”
Shopkeeper: “No shrunken head? Well you can fuck off and Ill keep the sword”
Ezio: *Warning Ezio did not kill civilians*

Popup: I mentioned this before and usually popup doesn’t bug me too much but when you are working on an escort mission and guard popup directly on top of you it can get annoying

New stuff does not always mean its better: Specifically the Crossbow and the Call Assassin ability. The Crossbow is 1000x better at stealthily killing people from afar than the knives at first it was a nice change to not have to worry about being seen but once you figure out that the crossbow kills just about anybody in one hit it becomes too easy. Add on the Call Assassin ability and the game pretty much plays itself I found myself at the later parts of the game being less of a bad ass assassin and more of the dick with a crossbow while all my minions do all the work. Seriously waaaay too easy.

My last gripe is LOADING: I understand its a huge game and that there is a lot of information to pull at any one time but this games cut scenes were literally destroyed because of all the load screens. Especially at the end when the Desmond team is heading to Rome to find the apple I would have gladly waited an extra min for it to load past one transition at a time.

Okay okay Ill stop griping now, all in all Assassins Creed: Brotherhood was just as fun as its previous games it just didn’t feel as polished to me and ultimately left me a little disappointed, kinda like Empire Strikes Back, I still love the crap out of it but I wont seek it out.

One thought on “Assassin’s Creed Brotherhood”