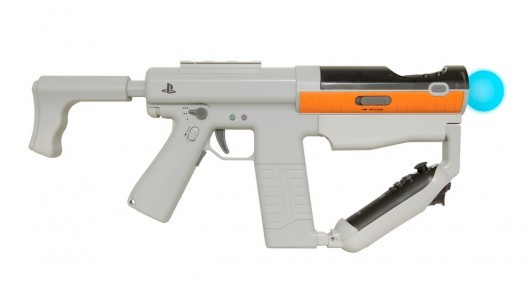 This is probably a little overdue but when it comes to playing FPS’s we tend to be a little on the side of purists here at IBeatItFirst.com so none of use have really given this thing a fair shake until now.  That being said, I decided to delve feet first and head deep in to playing with the Sony Move peripheral.  Am I happy with my purchase?  Do I want to throw it through my TV?  Click the READ MOAR to hear my decision.

First off let me say that I have been itching for a system like this to come out since I first got my taste of standing in front of a TV with a gun at E3 2005.  Back then a company name Monster Gecko, best known for their Pistol Mouse, was showing a prototype of a wireless gun you could use for FPS gaming on consoles and PC’s.  Since it was still a prototype it was rather bulky, but it was definitely a good indicator of things to come in motion gaming.  This was my first glimpse at things that could be and I was impressed.  Jump forward 5 years and something of the sort finally was being fully produced.  I admit it, I was impressed with the first videos that Sony put up, really impressed, and I couldn’t wait for it to be adapted in to a bunch of games to play.

Partnered with the Move Controllers and PlayStation Eye, the unit itself is exactly what’s needed for the market.  It’s a $30 add-on to existing hardware and it uses circuit boards to interact with the controllers instead of pulleys and levers (for most buttons).  The cocking motion works great for reloading weaponry (although the button on the bottom to mimic sliding in a clip seems a little gimmicky) and the unit tracks just as well as playing any other PS Move game on the market.  The fact that almost every button is mapped on the gun, and you have to finagle too controllers at once, seemed a little overwhelming at first but about 5 minutes in it became second nature.  Sony put a lot of time in to figuring out where and how to place everything and it shows.

The only physical complaint that I have is that the start button is at the very top of the gun, on the side of the barrel.  This location makes it a little cumbersome to pause the game when your wife starts talking to you, but to be honest I can’t think of any other place on the unit it will work any better at.  I will say that it holding it up for long periods of time can get a little painful if you have bad shoulders though (like myself).  This also may or may not be a hit with the multiplayer crowd too.  I don’t really do online gameplay but let me know if you’ve tried it in a deathmatch before.

All-in-all I will say that this is definitely worth the investment, especially if you have all of the PS Move hardware already.  I have been playing Resistance 3 with it so far and will have a review up for that shortly.  After that game is completed though I look forward to playing other games with this peripheral.  As always, you will be the first to know that IBEATITFIRST!