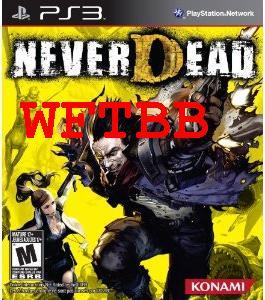 Its been a while since I have come across another game that I wanted to add to the WFTBB list.  But this game is just barking up the wrong tree for me.

NeverDead is a typical 3rd person shooter with a twist…the twist is that the dood is immortal and can use his body as a weapon/tool.  To me, this is a one trick pony game, and will get stale after a few hours.  Shit, even in the trailer they try to make jokes about the main character dying.  The game is called NEVER Dead so of course we all already know that he is not dead or going to die.  NeverDead’s enemies and bosses do look interesting but if all they do is follow the one gimmick then I’m going to pass.  Never Dead is the first winner of the I Beat It First Wait for the Bargain Bin Award for 2012…Congrats.

The Guy even sounds annoying to me..

7 thoughts on “Wait For The Bargain Bin Award! NeverDead.”