Video games that are made to tie-into a movie are notoriously bad. If you go back through the history of gaming you will find that some of the worst games ever made are tied to the release of a movie (ET the most notable). Sony seems to have figured out the best way to bypass this seemingly impossible hurdle for movie tie-ins though, put the video game part first. That brings us to Ratchet and Clank, a game based on a movie based on a game based on what I assume Sony & Insomniac always wanted to make into a movie. While the movie isn’t out quite yet so I can’t comment on it’s quality, I can assuredly comment on the game that it’s tied to. 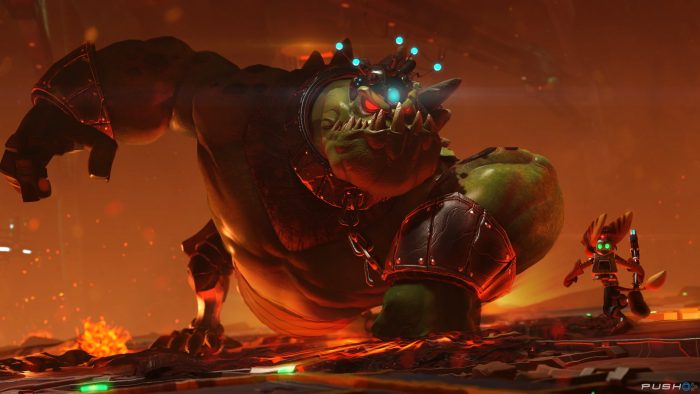 Ratchet and Clank is in essence a reboot of the 14 year old franchise that we haven’t seen since 2013. Why did they decide on reboot? I’m sure the first thought was the almighty dollar, but I’d like to think that the backstories for all characters had started to get a little convoluted after 12 separate games spanning the life cycle of 2 consoles. Some of the basics are still there, including staple characters, but their meetings, origins, and sometimes entire species has been changed (Dr. Nefarious is a green skinned large headed alien rather than a robot) to meet what we can only assume to be the building blocks for a new game and movie/show series that Sony has in the works.

One of the staples of any Ratchet and Clank game is the stable of high-powered and sometimes just straight up nuts weaponry and gadgets you use throughout your missions. Some of the staples are still here like the Combustor, Mr Zurkon, and the Omni-Wrench, while they have created some great new items for you. The Pixelizer causes shotgun style damage while de-resing the enemy into lower resolution pixels. The Proton Drum causes shockwave damage that hurts and slows down enemies while also shaking them down for holo cards. They also brought back some weapons that haven’t been used in a while like the Glove of Doom which launches out a swarm of explosive minions that chase down the enemy and cause massive damage. They also brought back great gadgets like the Hydrodisplacer, Magneboots, Trespasser, and O2 Mask to aid you in your quest. 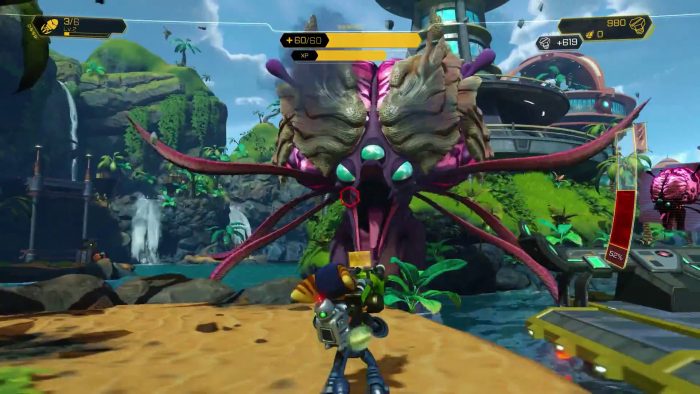 The one thing that didn’t quite translate over to the new console is the easy to use and responsive controls. The controls aren’t necessarily bad, but in Insomniac’s continuing quest to make the controls better they seem to have made them a little bit harder to use. Moving around is ok but the overall responsiveness of the controls just seemed a little bit off, making fast twitch sequences like complex grind tubes a little cumbersome; as well as the Hoverboard racing. Switching between weapons is still fairly easy but once you add 16 weapons to choose from you’re bound to have some complexity in your weaponry switching. 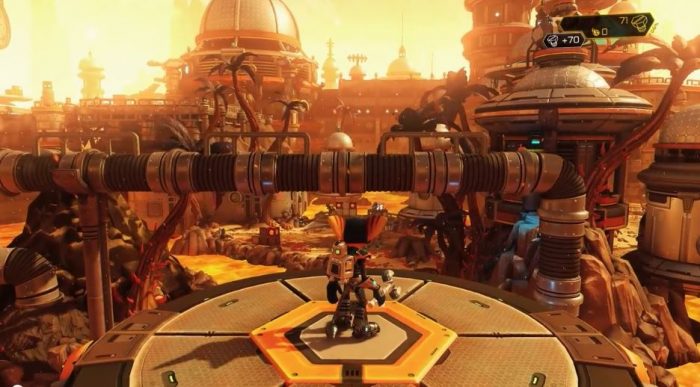 The story and writing is vintage Ratchet and Clank, making for a funny yet engaging story that is easily accessible by all ages. While some other entries into the series have better stories, in my opinion, it’s still a pretty easy to follow story that you can definitely tell is following the narrative of a movie. And it’s not that a movie story doesn’t translate well, it’s more that there are only so many side mission that they can add in before without making it completely different; this makes for a slightly shorter game but still staying satisfying. Since the movie hasn’t come out yet I can’t completely reflect the 2 together, but I can infer that they did a good job. 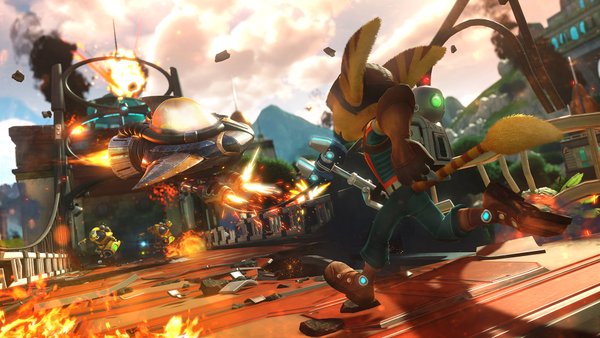 All-in-all the Ratchet and Clank reboot is definitely a move in the right direction for a franchise whose story started getting a little muddied after time. This is easily the best movie tie-in game that I’ve played before and gives hope that we will be able to see more like them in the future.