What do you get when you place Castlevania (in it’s prime) and Dark Souls in a hotel room with an endless supply of booze? The same thing you get when you put 2 hot drunk people in a room, MAGIC. Normally it’s a baby that shits and throws up everywhere, but in the case of video games you have a chance to get something amazing; this time the latter happened.
Salt and Sanctuary is equal parts old school Castlevania and Dark Souls, subtracting anything you might consider hideous, and making one masterfully crafted game. You traverse the terrain and dungeons in side scrolling fashion, moving up and down staircases and elevators, and dispatch countless enemies on your way to the ultimate goal of saving the missing princess and solving the mystery of the island. While all that sounds like it would be easy in comparison to current games the Dark Souls aspect will make sure that you eat those words, choke on them, die, get resurrected, and repeat that process ad infinitum. 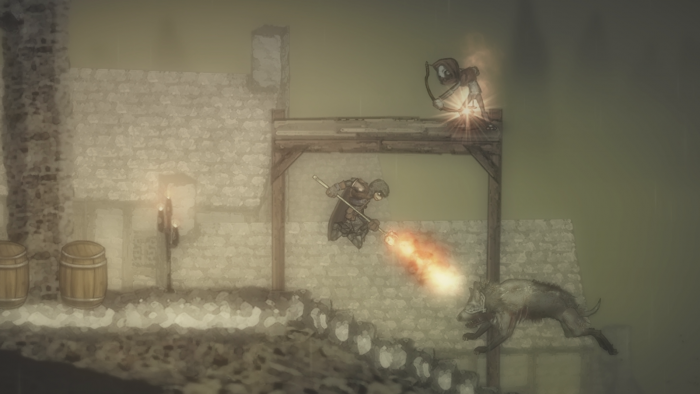 You start the game by choosing one of many classes, I chose Hunter, and then traversing the world while building up your level, expanding your skills, and finding/making new weaponry & armor. You have 2 forms of currency in the game, gold and Salt. Gold is used like it is in every other game (buying shit), but Salt is the difference maker. Salt is your EXP and your currency for leveling up weapons & armor, but there is a catch. You can only level up at Sanctuaries that you join or takeover along the way and the path is riddled with hundreds of enemies that respawn every time that you enter a sanctuary. Why is this different than most other old school games? Well, much like Dark/Demon Souls and Bloodborne your character is either only just as strong or weaker than most of the enemies for a good chunk of the game. This creates a long circle of fighting your way around and heading back to a Sanctuary for healing and leveling up as swiftly as you can.

Why do you have to hurry back to the Sanctuary as fast as possible? If you die you lose ALL of your Salt to that enemy and have to make your way back to that spot and kill the very enemy that already bested you in order to retrieve the lost Salt (oh yeah, and make it back to the sanctuary to level up); if you die before retrieving it, it’s gone forever. The same rule applies to bosses but the boss will have a certain level of damage you must surpass during the fight in order to keep from losing all of your Salt when you inevitably die.

While you can beat the game at around level 70-90, New Game+ allows for continuing your fight and leveling up your character and weaponry passed 500 (a reported level cap is at 536). You can start to develop magic and prayers, learn how to wield other weaponry that you didn’t attempt the first go around, and transmute your current weaponry into cool new ones. During my first playthrough I focused on swords and greatswords as my weapon of choice and have ended up with some amazing variants including, but not limited to, a gunblade, a whip-sword (ala Ivy in Soul Calibur), and a giant pair of fucking scissors that decimates ALL! I’m not going to lie, the giant scissors is by far my favorite.

In total there are 23 bosses throughout the game, some complex platforming, and a myriad of creatures that can be as hard to fight as even the toughest of the bosses. While there is not an abundance of dialogue to flesh out the history of the island and bring light to the fate of the princess, there is just enough information and visual artistic changes to keep you interested in the island as a whole. You can tell that the island and it’s structures have been around for a very long time by their obvious decay, and it definitely has a purgatory feel (which is what I gathered was what they were going for).

Visually it’s a stunning work of art. Everything is hand drawn and has a very decided “beautifulness” to it, from the very armor that you wear & weapons you wield, to the environment & terrain you traverse, and enemies & bosses that you defeat. It really does look as if someone took Dark Souls and threw it into a 2D realm. The vast visual differences between areas of the island helps cue you in to where you’re heading, especially since the game provides you with no map to aid you in your quest.
The game is definitely worth the playthrough, albeit not for the faint of heart or quick to ragequit.