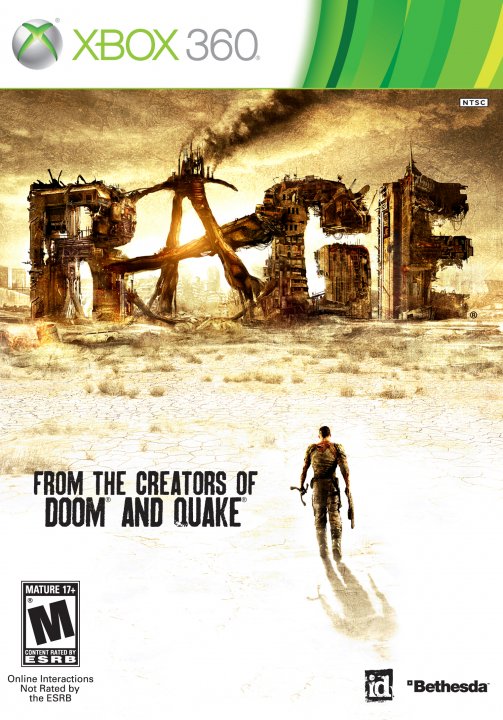 Time : 20 hours to do just about everything.

RAGE! RAAAGE! FUCKIN’ RAAAAAAAGGGGGEEEE!  Ha ha ha.  I’ve been looking forward to this game for quite a while. A beautiful post apocalyptic FPS? Sign me up!  And I’ll tell you what, they sure did deliver, the game is beautiful.  But just like a woman, they lure you in with all of their beauty, but then they turn on the crazy.

My first impressions of Rage were well met (I swear I spent 5-10 minuets just looking at the amazing clouds)  looking over the the world it would look like a picture at times and I would stop sometimes and just look around.  Yes a nice big open desolate world,  filled with crazy Bandits, creepy mutants, creatures and an over powerful space suit wearing authority….wait a minuet this sounds very familiar…..

It was uncanny how similar the games were,  separate loadable areas for missions, towns small side quests and where you get all of your information, main source of travel is a Mad Maxx style buggy with guns, ammo types act like element types, Should I continue?   I bet if the sentry turret could talk it would say “HI THERE I am cLAptr4p!”  But enough about Borderlands this is a review on Rage right….right?

Again obviously the biggest draw to Rage was the visuals the world is very pretty and the details really make it feel like a living breathing world.  All the NPCs you meet are gorgeously rendered and easily steal the show, I wish they would have made some more “out there” characters rather then just the average human wearing something odd or metal arm.  However with all of this graphical power (and the huge install) the game looks disgusting the second you get close to anything.   “But Jason, why waste time looking at the small things, the game is purdy” …It sure is, however, its not just “oh I used a scope on this can and now it looks like shit”, no its like “Everything in this world has a layer of Vaseline on it”.  I know its nit-picky but its shit like this that pulls you out of the game.  Also the constant popup in the game (after installing it did get better) but everywhere I looked it would pop in more detail as I waited, felt like I was playing Halo 2 all over again…but prettier.

As far as a FPS goes I had a lot of fun, the weapons are satisfying and fun to use, Crossbow+Mind control darts = easy mode.  Also for the first time in a long time I found myself rarely using the Iron Sights to aim, there didn’t appear to be any benefit and it was way easier to aim from the hip, especially at the quick jumpy mutants, this made me have some “oh shit” moments when an enemy got close.  The biggest add on to Rage was being able to build components/ tools to use.  It gave you incentive to explore every area to find that last needed piece to build your next sentry turret (sentry turrets being the best thing ever used in a FPS).  However I found my self not really using anything else I made except the turrets.  I never used a Bandage, as it was impossible to die,  I never used any damage augments/grenades, as the wingstick KILLS EVERYTHING and out side of the one mission where you have to use the RC car bombs they were normally a waste of time.  So it was nice to have the option but all that was really needed was firepower and the game wasn’t shy of giving you that with all the different Ammo choices. 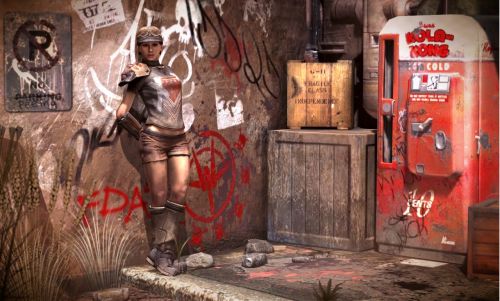 The biggest gripe I have with the game is the story line…or lack there of… its an interesting world that they made here for Rage but nobody bothered to give us any information on it or you for that matter.  It constantly felt like “Welcome to the new world, now MURDER EVERYONE!”.   One of the characters even said they are glad they found me and that I joined them, as most other Ark survivors join up with the Authority….WHY? And where are these “others” now?  And while we are at it Why am I killing all of these people for you?  There is no benefit for me here, and I just obey because you found me first?  Stupid!    While I’m bitching, there was only one actual boss battle and it was at like the half way point in the game, id had so much time and resources to make this game epic as fuck but I cant help but feel like they really dropped the ball, especially with that piss poor ending.

Ok, ok, well despite my gripes on Rage I did have a fun time while playing it and that is what is really important.  However, If you haven’t played Borderlands yet, save yourself some money and get Borderlands first you can get Rage once its in the bargain bin, Sorry, but it was a far superior (and bigger/longer) game.  Now if you didn’t like Borderlands then Rage may be what you are looking for as its a nice easy fun time and you don’t have to worry about any RPG elements or story slowing down the action.

*note to game developers* Stop making Five Finger Fillet mini-games, they are a pain in the ass.

17 thoughts on “RAGE Pretty from Afar, but Far from Pretty.”