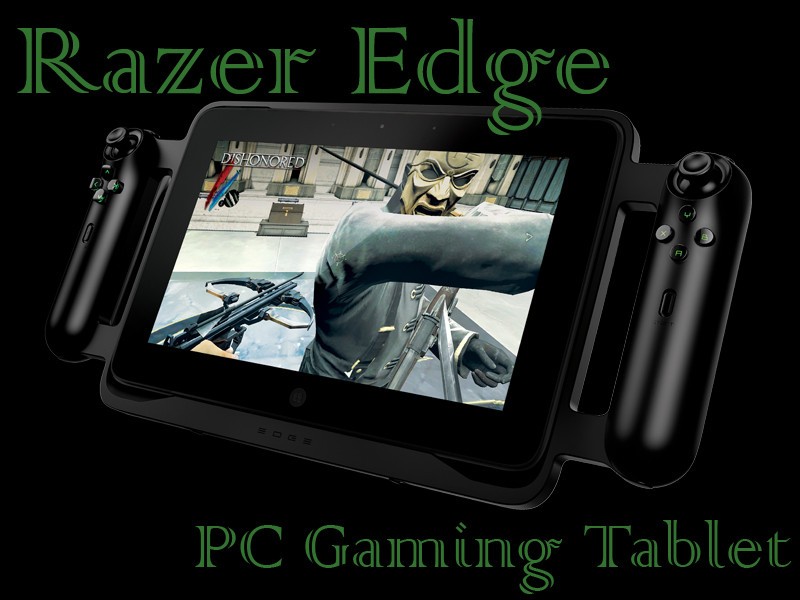 Microsoft brought the full windows experience to the tablet with Windows 8, and now Razer is bringing PC gaming to the tablet. Versatility is the name of the game when it comes to Windows 8 devices, and the Edge is no different. This tablet comes in two levels, and 4 modes. Razer claims it’s the most powerful tablet in the world, and therefore isn’t cheap, but then again, nothing in PC gaming is. The base model comes in at $999, and that doesn’t include the accessories that really make this tablet different.

Let’s start out by breaking down the specs between the base and pro model, both of which have a 10.1″ screen and will be launching in Q1.

The first mode, is clearly tablet mode. You can play Civilization 5 in touch form, but for serious PC gaming, touch isn’t going to cut it. Never fear, if you pay $249 you can get the game pad controls, or for $1499 you get them and the Pro model in a bundle. This gives you force feedback, analog sticks, triggers, bumpers, and buttons. Engadget’s hands on found wielding the tablet with force feedback unwieldly, but really enjoyed the controls. It can also be fitted with a $69 battery, effectively doubling the battery life of the tablet. The only version available at launch will be console mode. At $99, you can get a dock for the Edge. There’s nothing really special about the dock, relying on the Edge to make it stand out. Plugging it into the dock, it turns it into a console. Plug it into your TV via HDMI, and connect some gaming controllers to it (via the plethora of USB ports) and power up Steam Big Picture Mode, and you have yourself what is effectively the first SteamBox. Finally there is a PC mode, with an attachable keyboard. Just like the game pad attachment, it has a slot for an extendable battery. There currently isn’t a price on the keyboard, and it won’t be out until Q3.

The only way I could recommend this is if you are looking for a Windows based PC and enjoy playing PC games. It’s pricey for a tablet, and for a PC for that matter, but for a portable console you can use on the go or at your friends house and use as a PC, it’s one of a kind. If you fit into that category and have the money to spend, then I say get it. If however, you aren’t looking for a tablet and a way to play PC games on the go or your TV, then this gets a pass. I anticipate the nVidia Shield costing less, as it has a smaller screen, and a Tegra 4, and not a Core i5 and GTX640M LE, not to mention a 64GB SSD. There is also the option of hooking up a desktop to your TV.

Be sure to check out Engadget’s hands on with the device, including a hands on video, as well as Razer’s website.