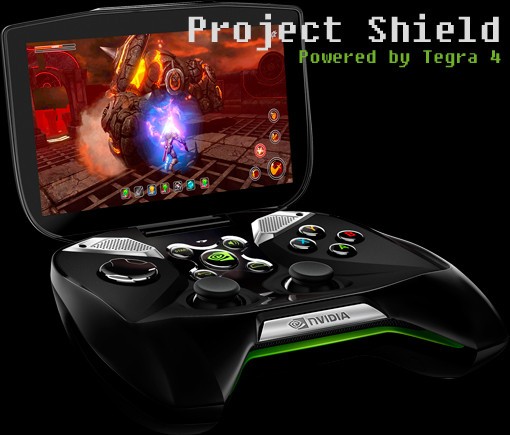 Big news from nVidia at CES tonight. First is the Tegra 4 chip, which boats 72 GPU cores, 6 times that of the Tegra 3. Not only that, but it also finally supports 4g LTE, running on their new i500 software programmable modem. The modem is able to process 1.2 trillion operations per second.  It also enables 4k resolution (4x that of 1080p). While 4k is nice, if you don’t have $20,000 to drop on a TV, or $5,000 on a monitor, you won’t be able to use it anytime soon. It also has some cool camera tech, like HDR, but this is a gaming website. That being said, you might be wondering why do I care about mobile processors? THIS IS A GAMING WEBSITE!!! Project Shield is why.

UPDATE: It has been stated that Project Shield will be released in Q2. Also, people have been getting hands on demos with the device, and I found a rather lengthy, but a really good hands on with some nVidia employees present to add tid bits of info, like the 2gb of RAM and how console games are being ported to run naively on the device, often with no changes needed. The RAM probably has a big reason for this, as it absolutely destroys what’s available in consoles, topping out at 512mb in the 360 and 265mb in the PS3. PC streaming also seems to work quite well. Now if they can hit the right price point, I might have to pick one up, granted if I can afford it and a fancy new video card. Also, if nVidia is reading this, I’ll take them free as well. Now for that video!

Project Shield will be the first nVidia branded mobile device, and is powered by the Tegra 4. Basically it’s an xbox like controller with a screen attached to it, and the xbox built in. It runs on Android, so it can play all the Android games, as well as their TegraZone games. It can be hooked up to your TV to play these games on the big screen, and if you do spend $20,000 on a TV, in 4k resolution! Here’s the kicker though, it can stream games from your PC, just as the WiiU controller does from the console itself. To answer the question you are now asking, yes it does support Steam, but you’ll need a GTX650 or higher in your PC to do so. This is the best application of Steam’s Big Picture mode yet.  It’s an open platform too, so hackers rejoice. It comes with a microSD slot, so expandable memory! Battery life should be between 5 and 10 hours, and in a size that’s smaller than a WiiU controller. No price has been announced.

Consoles and mobile gaming have been put on notice. Below are some videos of Project Shield by Venture Beat, as well as some pictures of the device.