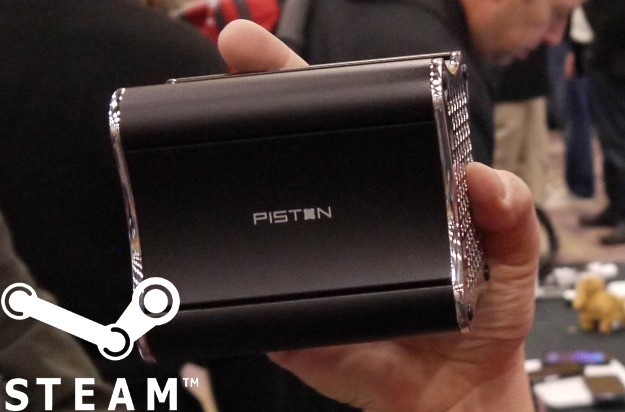 Valve may not be able to count to three, but they found a company that can. Valve is working with Xi3 to make a version of their modular computer for the Steam Box. Xi3’s take on the Steam Box is called Piston, and is based on their performance model X7A, which costs $999. Actual cost of the Piston has not been released, as well as most of it’s specs. We do know it’ll have 1TB of storage on board, with the option to upgrade RAM and the CPU. The Piston is very small, about the size of a grapefruit and easily fits in the hand. But wait, there’s more!

You thought Valve could pin all their hopes on a company with a hieroglyphic as strange as ‘3’ in their name? Valve is in fact meeting with many hardware manufacturers and have brought several prototypes to CES, both custom and off the shelf. Doug Lombardi describes these prototypes as “low-cost, high-performance designs for the living room that are great candidates for Steam and Big Picture.”

Gabe Newell sat down and talked to The Verge about the Steam Box, mentioning that it’ll run Linux, but you’ll be able to install Windows on it if you want. He also laid out their plans for the Steam Box ecosystem of good, better, and best. The official Steam Box will fall into the ‘better’ category, and is tightly controlled by Valve. The main issues Valve looks to control are price, performance, and form factor. It needs to be inexpensive, perform well, and be small enough to be in the living room, which is why the Xi3 Piston fits this bill pretty well.

In the future (post-Kepler, i.e. nVidia GTX600-series) he views it acting as a server, allowing up to 8 TVs, playing 8 games from 1 PC. A PC can already handle multiple monitors, so he see’s this as an extension of this. Looking at the in home streaming tech in Project Shield, this seems possible. Head over to the Verge for the full interview.

[UPDATE] Engadget has taken a photo shoot of the various Steam Box prototypes that you can view here. Apart from Alienware and Digital Storm’s off the shelf offerings, the rest have very small form factors that would fit nicely in the living room.

I’ll update this as new info comes to light, so keep checking back.