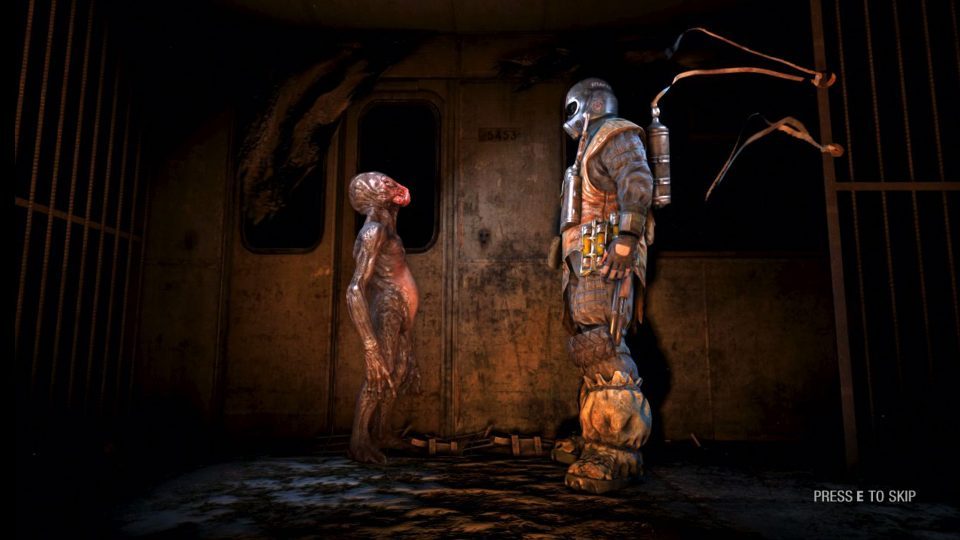 The Steam Summer Sale is on, and Metro: Last Light is on sale for 20%, but should you really buy this game over others? The short answer yes. I was excited to get this game, I bought into the trailers, so I preordered this game, but didn’t get around to playing it until this week. 4A Games delivered on the hype, and Last Light is a solid game. Last Light improves upon its predecessor, which you can read Jason’s review of it here, in nearly every way.

Didn’t play 2033? What is this game? Well the Metro series is based upon the novel Metro 2033 by Dmitry Glukhovsky. This takes place in a post apocalyptic world where people have taken refuge in the Metro of Moscow. The stations have become underground cities, where soldiers fend off attack from mutant monsters, a new threat called the Dark Ones. Three factions control the Metro, the Reds, or communists, the Fourth Reich, or Nazis, and the Spartan Order, which is made up of Rangers that transverse the surface wearing gas masks in order to breath the contaminated air. You take on the role of Artyom, an orphan who has a tall task placed on his soldiers of trying to save the Metro, both from mutants and its self. They have created a fully realized and believable world with a compelling story.

Graphics: Last Light is a beautiful game when it comes to environments. Up close, character models show their age, this is not a next gen game, and it’s not Battlefield 3. The shear detail in the environments really bring you into the game. Your gas mask will get blood splatter on it, or water, or dust, forcing you to wipe it off. It can even take damage, becoming cracked and forcing you to find one to swap it out with if you hope to survive in the radiated areas of the Metro and on the surface. Then there is your watch, which displays the time left on your filter, as well as blue light to see if you are exposed or not. Some of the weapons even expose their rounds, showing you how much ammo you have left. These are important details should you play the game on Ranger mode, where there is no HUD. It also helps to bring you into the game more. This game also gets proper dark, where you literally can’t see anything, and must use your flashlight to see, unless you are in an area where electronics don’t work, and then your lighter will have to do.

Gameplay: I must say, the gameplay mechanics have improved over those in 2033, especially where mouse sensitivity is concerned. In 2033, I had a different sensitivity for the x-axis as I did the y-axis, and navigating the menus with a mouse was horrid, as the sensitivity was terrible. It took some adjustment to play 2033, this was not the case for Last Light. The game played how you thought it should play. Just as in 2033, military grade rounds are still used as currency, and if necessary, can be swapped in to your weapons for added punch. Spend your money at the shops buying ammo, and useful upgrades to your weapons, like silencers and infrared scopes. You can’t buy filters in Last Light, so it’s important to keep and eye out for these and loot them every chance you get. While fighting bandits and rival factions, I prefer to use stealth, and shoot out, turn off, or unscrew the lights to make it dark, and easy to sneak around. Throwing knives are my weapon of choice here, as you get them back from the body, or wherever you threw them, and are silent. When I’m out of those, switching to a silenced weapon works well. Fighting mutants however…well, a good shotgun and assault rifle, mixed in with some oh shit oh shit oh shit, do I have enough filters? oh shit oh shit oh shit. It is important to note that you can knock people out, or not kill those who surrendered, as well as other moral choices throughout the game, that in a normal shooter you’d think not matter too much, but in fact they all add up to what ending you get. If you didn’t get the ending you wanted, never fear, it’s on youtube for you to watch.

Story: The story, as well as the world, is what really sells this game. Metro 2033 had two possible endings, and this is not Mass Effect, so your saved game doesn’t carry over, they just picked one of the endings. So if haven’t played 2033 and don’t want a spoiler, well, skip this section and go play it, or read the book. Still reading? Good. So it assumed didn’t abort the launch and you nuked the Dark Ones, killing all of them just as man killed each other to get us in this mess. It turns out that one survived, a child, and you, now a Ranger, are tasked with leaving D6 to hunt it down and kill it, as you are the only person immune to their jedi mind tricks. Khan explains that he believes that they are trying to communicate with us, but we just aren’t “wired” the same way, so we die, except for Artyom. Mix this in with the possibility of a war breaking out in the metro, and you have an interesting story line. The story is told through chapters, with you narrating some info prior to the beginning of one, and finding notes you have written through out the world on top of what you actually experience. Some of areas on the surface get into your mind and you see it prior to the nukes, adding some creepiness to the world and bringing you into the world more, rather than just some playground with post-apocalyptic decoration.

Sound: The voice acting in Last Light is actually pretty good. I can’t really complain about any of the voice acting in the game, or any of the sound for that matter. Sound plays an important role in the game, as your heavy breathing can indicate your filter is running low, or a beep on your watch could mean it’s time to switch it out, or heavy radiation. Making too much noise can also draw enemy’s attention to you, so it’s important to crouch to quiet your steps, as well as avoid things like broken glass. A noisy environment can also help to mask your noise, so being around running generators can help you sneak around. Music also keys you into if there are still enemies around, as when you are in an area and the alarm is raised, music will be playing until you kill/defeat all of them.

Gripes: I didn’t really experience much in the way of bugs, which is a nice compared to some other games, I’m looking at you Assassin’s Creed. I did wish though that the game was a bit longer, lasting only about 8 hours just isn’t cutting it for a single player only game. The “good” ending wasn’t nearly as awesome as the “bad” ending, which is sad. The monsters were awesome, but I thought the human AI was pretty predictable, and some of the shooter gameplay mechanics can be improved upon. There was also a point in where you were in the enemy factions base, fully aware of their plans, and had the means to sabotage their armored train, but sadly this wasn’t an option. This is do to the linear nature of the storyline, I’d just like some more interactivity to it. The only thing you can adjust is the ending cinematic based on how you acted throughout the game (which it doesn’t tell you what those are, which I like, making it more natural), so other than that, there aren’t any consequences for killing someone vs knocking them out.

What’s next for 4A Games? Last Light concluded Artyom’s storyline, so what’s next for this developer? Well I reached out to them for comment, and they currently don’t have any definite plans. While Artyom’s story is complete, there is more in the Metro universe to be explored, and a third game in the series is a real possibility, but that is a decision for the game’s publisher, Deep Silver, as they own the rights. They do have some ideas for other games that they are evaluating, but regardless of the direction, one thing is for certain. It’ll have a deep story, believable world, and have an attention for detail while continuing to improve the gameplay.