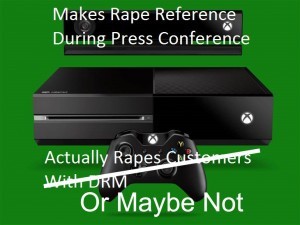 None of this has been confirmed by Microsoft yet but Giantbomb.com is reporting that there are big changes to the XBOX One’s game policies, essentially killing all DRM that was going to be imprinted to the console.  Those changes are rumored as follows:

Is this true?  One can only hope so after the shit storm that has been brewing over the last month or so (highlighted by us last week).  If this does take effect though it changes the landscape of the next-gen war.  It does make you wonder if decisions like this are made because the customers are demanding it or MS is concerned that Sony will win.  We’ll keep you posted as things develop.

And just like that, it’s now been confirmed.  Microsoft has posted a long article on their site confirming that the rumors are true.  Here’s the main bullet points:

Read the full release to hear how MS has realized that they were going to be destroyed in the court of public opinion.

4 thoughts on “Is Microsoft Actually Listening to Consumers? *UPDATE* YES!!!!!”