Thrustmaster came to E3 to show off some of it’s new flight products, as well as their racing offerings. The main focus of this years show though was on the flight products. They were showing off their new metal TPR Rudder System, that uses a pendulum system just as you get in a real aircraft, rather than a slider system used in most sim rudder systems. This provides a more true to life experience, as well as incredible fidelity. Continuing the authenticity in flight products, they showed off a flight stick that is modeled after the one used in an A10 Warthog. 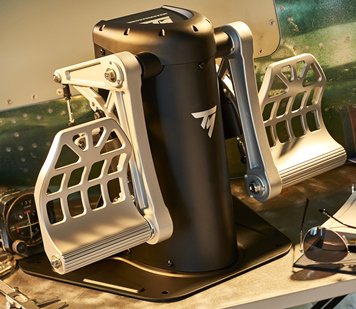 A new addition to this though is the fact that the stick is removable from the base, allowing you to attach other flight sticks to the base depending on the aircraft you are flying for true authenticity. This is a similar to what it used in racing wheels, where you can easily change out the wheel from the wheel base to match the car and type of driving you are doing. They also showed off some new headsets that are modeled after what actual flight and pit crews use, down to using the same materials. They showed off an Air Force version for flight sims and a Ferrari version for the sim racers, and both looked very good. 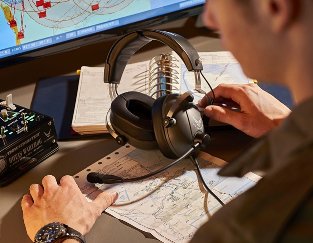 On the racing side, they were showing off their programmable bluetooth LED display that works with the PS4. It can display your gear, RPM, lap, temperatures, lap time, or anything you want it to. Also on hand on the racing side of things was their handbrake and sequential shifter, which they made in partnership with Sparco. I must say, it did feel really good, and can be used in a vertical position as found in hydraulic handbrakes, or a more traditional horizontal handbrake action. Thrustmaster, if you’re reading this, I’ll take one, or two, or twenty. Thanks. After being walked around their booth, I got the chance to sit down and use these products in the first playable demo of Assetto Corsa Competizone. 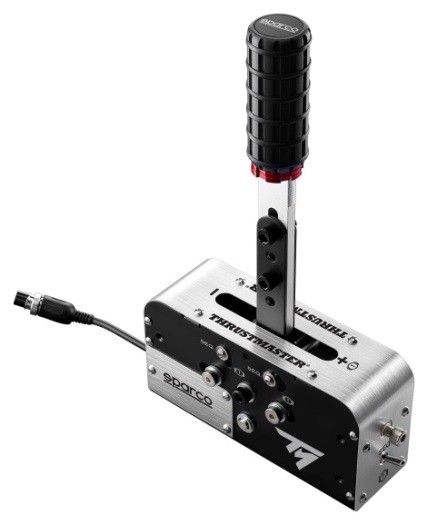 I had 5 minutes to try to set a sub 2:10 lap time in a Nissan GTR, at night in the wet. Going off track would negate your lap time, as Assetto Corsa Comeptizone aims to be true to life racing. The first lap was a wash as I learned the course, and the car. My second lap was going good until I made a tiny mistake and ended up spinning out. My third lap was going really well, and they even turned the cameras over to me as I was nearing that sub 2:10 lap time, but time was against me and my 5 minutes came to an end.

If I did complete a sub 2:10 lap time, I would have been given the opportunity to go up on stage where they were streaming and try to set my fastest lap time on a full motion set up. The person who set the fastest lap time at the show would get a TV and all the Thrustmaster products for a full rig. The motion rig set up however was not part of the deal. Assetto Corsa, and the Thrustmaster wheel base and pedals felt really good. The paddle shifters worked well, and I would definelty recommend looking at Thrustmaster for a simulation rig set up, as it did seem to be on par with offerings from Fanatec. I would like to spend more time with the Thrustmaster unit and my Fanatec unit to get a better idea of which one delivers a better feel.