Prior to E3 there was a leak of titles coming to the Nintendo Switch, with the focal point being Fortnite. Hidden in that though was Killer Queen Black, and if you know me, I love me some Killer Queen, so the hype was real. Killer Queen has only been available as a 10 player arcade game prior to this, as well as the field game that inspired it. The fact that it might be coming to Switch got the community buzzing (bee pun intended). The official Killer Queen Facebook and Twitter pages also changed their profile and cover photos to black boxes, pointing to the fact that this leak was indeed true. On Monday during the E3 Nintendo Direct presentation, Killer Queen Black was officially announced.

Killer Queen Black is a ground up build from Liquid Bit and BumbleBear Games focused on consoles, specifically the Nintendo Switch, as well as Steam. We interviewed Joshua DeBonis, one of the creators of Killer Queen Arcade on the show floor, which you can listen to here. Following our interview we got hands on with the game. We covered Killer Queen plenty here at IBeatItFirst.com, but as a quick refresher, Killer Queen is a 5 vs. 5 arcade game. The gameplay mixes Joust with Super Mario Bros. as two teams battle it out. One player on each team is the Queen, which allows them to fly and dive, as well as kill other players. They are also responsible for changing gates over to their teams color. The other 4 people play as grubs and can pick up berries or ride the snail, but can’t fly or kill anyone. At least not yet. Those gates that I mentioned? If a grub has a berry and walks into one, they will either get a speed boost, allowing them to run faster as well as ride the snail faster. They could also become a warrior by entering a warrior gate, giving them the ability to fly and kill others. You can stack speed with becoming a warrior if you get speed first as well. The way you kill others is the same as in Joust, by being either behind them or on top of them, with the game swinging your sword automatically. To win the game, you have three options. You can collect berries and fill your hive, you can ride a snail into a goal, or kill the enemy queen three times. The arcade game only has 1 joystick and one button, so controls are super simple, but the strategy that goes into the game and the team play still gives veteran players an edge. 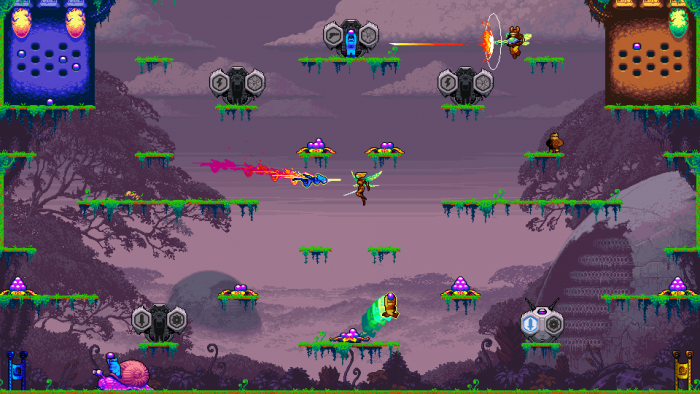 Killer Queen Black makes some very noticeable changes from the Arcade game however, dropping one player to be 4 vs 4. The reason for this has to do with the hardware limitations of being on the Nintendo Switch, as the max amount of joy-cons it supports on one console is 8. That answers another question, as it does have local play, as well as online play. The ways to win the game are the same as that hasn’t changed, but the maps are a bit smaller to keep the action tight with the lower player count. The game plays less like joust now, as you have an attack button that you must use to actually attack when you’re the Queen or a warrior. If you don’t attack, you’ll just bounce off of them. Adding in the attack button was also done for technical reasons, as it helps with the input lag experienced with online play. They also added in new weapons, like a laser rifle and a morning star. There will also be a shield, but that wasn’t present on the map available at E3. When you’re a warrior with a sword, attacking gives you a quick dash move, the morning star has you swing it around you, and the laser rifle, well, fires a laser. The Queen can now not only dive, but perform a horizontal dashing attack that proves to be very deadly. Grubs can now also throw berries, which should make it a tad bit more difficult to hive guard. Gates now can also have two options for you to choose from. In order to choose which one to transform in to, you’ll stand in the gate and then move the thumbstick in the direction of the icon you want. There is also the addition of a “Black” team, that will be the team on the longest current undefeated streak. Kill the Black team, and you become the new Black team, so it’ll be a coveted, ever changing position. There will also be ranked matches you can take part in, so let the shit talking between scenes begin. 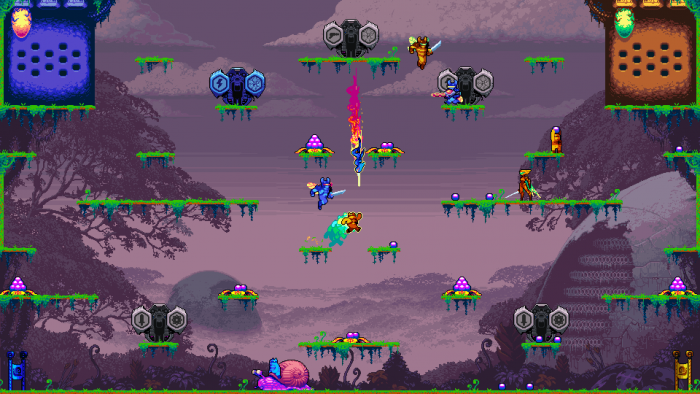 The changes to Killer Queen give it a unique feel to the Arcade version, but the intense action is still there. Make no mistake, this is a Killer Queen game, and I still get the same pissed feeling when I die. You can sign up for the beta now here, and KQ Black will be releasing on Switch and Steam this winter (aka early 2019, likely January) for $19.99. In the meantime, I’ll be honing my skills on the Arcade version while the hype builds.