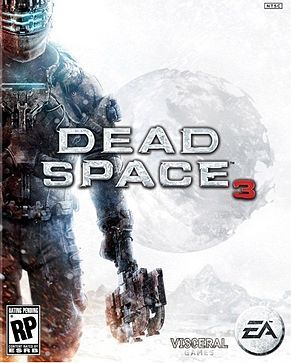 Dead Space has been one of my favorite Survival Horror game series since its initial release.  From the heavy resource management to the necessity to use the environment as weapons, EA definitely found the best formula for getting us scared.  However, once I saw the first game play trailers for Dead Space 3 my biggest “fear” wasn’t from the Necromorphs but from my beloved Survival Horror game becoming just another 3rd person shooter.

Story:  If you haven’t played any of the other Dead Space games stop reading this right now and go get a copy, I’m sure you can find them for super cheap now too, as they are great and a very welcome addition to the genre since Resident Evil went all nuts.  Anyway Dead Space 3 picks up almost immediately after DS2 with a slightly older Isaac, Isaac (forever unable to keep a woman by his side) is now called upon by the last remaining sect of EearthGOV to join them in finding, and aiding, his now ex-girlfriend Ellie.  So yes, once again, Isaac must go to some far off location to rescue/find his love interest.  Tired love story aside, we are treated to some very dramatic twists as we come to find what could be the Marker home world and what may be a way to put a stop to the Necromorph surge and the convergence once and for all. 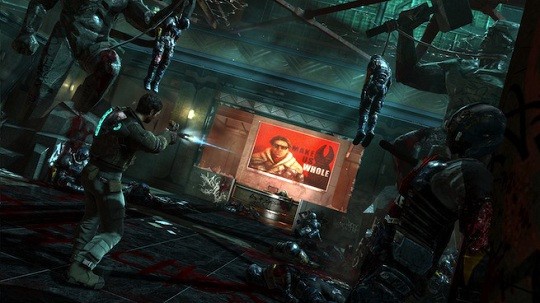 Game play:  Dead Space has always been about moving slow, conserving ammo, and doing whatever you can to find extra items and gear to kill everything.  Unfortunately (at least in my opinion) Dead Space 3 plays more like a shooter or action game rather than Survival Horror.  For starters you never need to worry about health or ammo, even playing on hard I always had more than enough health packs and ammo and anything I couldn’t find I could just make at the nearest bench (and there always was a bench nearby). Inventory was no problem, even with all of my health packs I never ran out of space in my personal inventory and the fact that there is now only one type of ammo made sure that I never ran out of ammo or had to worry about what ammo to carry.  Yes you read that right one type of ammo for all weapons. Blade saws for the ripper and bullets for a machine gun use the same ammo…ugh. I also found DS3 to be the most predictable of all Dead Space games, and it was also the least “Scary”, as aside from the Necromorphs jumping out of air vents there weren’t any real “AH HA” moments.  Remember that Sun from Dead Space 2?  Yeah nothing like that ever happens in DS3.  I will say that Dead Space 3 was by far the most stressful of the series as you had to take on a hoard of enemies at once (making it feel like more of a Shooter) but at the same time adding to the need of having a good load-out for your play style and creative Stasis use (to be honest this was the first DS game that had me using Stasis all the time).

Sound:  Dead Space has always been fantastic in the sound category and is actually, in my opinion, its greatest strength.  From the sound of something scurrying through the vents to the satisfying squish sound when stomping on enemies.  Nothing beats playing a Dead Space game with headphones or a full surround sound and Dead Space 3 kept that aspect intact.  The voice acting was well done as usual even if some of the lines or script made you roll your eyes, especially anything new Antagonist Jacob Danik said.  Also the sound of the new Twitcher enemies, any time I heard the rushing shambles of this son of a bitch I knew I had to get somewhere safe.

Graphics:  Graphically Dead Space 3 was the least impressive to me of the trilogy.  Maybe its because there are so many other gorgeous games out there that DS3 just looks dated but I remember being wowed in DS1 and DS2 by some of the beautiful views.  It could also be a sign of the Xbox’s age as parts when riding on the shuttle between space stations seemed really grainy. Also the Xbox version requires two disks, not a problem for all but still a pain in my opinion.  On the plus side this was the biggest Dead Space game, and the longest, but when areas start to be noticeably repeated it gets a little old, especially since you can plan or predict where the Nechromorphs are going to come from.

Gripes:  Micro transactions for this game are through the roof almost as bad as Mass Effect (oh another EA game you say).
There are required Co-Op only missions, in a game like Dead Space where Collecting Text logs is really the only window to the story, the fact that they would have certain areas be only accessible when you are playing Co-Op seems pretty lame.  I understand that the Co-Op is for us to have fun but when they use it to take away from the Single player experience then it starts to feel like a lame type of DRM.
“Oh you are renting the game? no Multiplayer or Co-Op for you!”
“That’s ok EA I just want to play the Single player game and experience the story”
“Ok, Well to get all the story you need to have Co-Op…plus all 8 DLCs”
“EA, this is why you suck and I’m glad I did not purchase your game”

All in all I did enjoy my time with Dead Space 3 and it was a fitting end to the saga so far.  If EA does decide to continue with it I will probably still line up to play another.  Until then I BEAT IT FIRST.