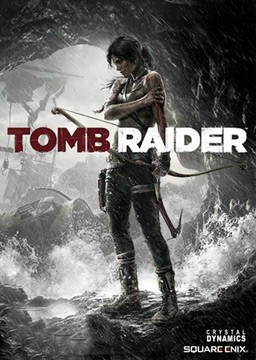 Time to Beat: About 22 hours

As you know Uncharted was first called “Tomb Raider with a guy” so it feels rather odd to call this version of Tomb Raider “Uncharted with a girl” however since this is the first full Tomb Raider game on the current gen systems, we will say just that and not feel too guilty.

Story:  This is actually a full reboot for the Tomb Raider series and sort of an origins story on how Lara got into Raiding…Tombs…So do not expect to duel wield Lara’s iconic pistols any time soon.  Basically Lara is part of an expedition team looking for the ancient island/civilization of Yamatai (think Atlantis….. but Japanese…and not underwater)  Anyway, Lara and team are able to find the island but are in for a lot more than they can handle as their ship is smashed and they are captured by insane cultists who still live on the island.  It is up to Lara to find her friends and a way to escape the island alive.

Game play:  TR handles like most other third person shooters although it feels less bullet heavy as you are given multiple options to kill in alternative ways.  Areas are mapped out pretty straight forward with a puzzle, fight area and platforming area usually well integrated into the map.  Similar to Uncharted there is not really much deviation as to where you can go or do. Each section pretty much works on its own (as far as hidden items or side quests) and there isn’t much need to come back to any area once you have fully found everything. Outside of normal set pieces or quick time events most of the game is fairly simple and the less than smart enemy AI ensures that as long as you stay in cover you will be just fine, however, I did find myself running out of ammo, more than once, forcing me to use less desirable weapons or run out of cover (if intentional, the game design was well done to keep me from camping).  I would also like to point out the Mature rating of Tomb Raider, as the game play isn’t any more violent than Uncharted (as far as battles with enemies go), but it is FAR more visceral in Lara’s death scenes and visualizations within the game.  I actually cringed more than once while falling during certain platforming sections, slipping into a spike or listening to cannibals beat and eat another human being (yeah that happens).  Now, just because the battles between enemies are not overly graphic doesn’t mean the game isn’t gory.  Between the stacks of mutilated corpses and diving into a river of blood made  by cannibals Tomb Raider definitely shot for the mature rating and succeeded. I mean there were parts of Tomb Raider that were more gory or brutal than Dead Space 3!

Graphics:  Tomb. Raider. Is. Absolutely. Stunning!  Between the amazing sunsets against a shipwrecked beach to the rivers of blood surrounded by severed body parts this game is gorgeous!  And its not just a pretty game as there was a lot of thought that went into the design of Lara and her interactions with the world.  When she is close to a fire she will block her face, when she is close to a wall she will put her hands out to help guide her, when she is in a tight space with a torch you can see the fire spread out along the ceiling, when walking in water she would slip or trip, I could go on but the level of production in making Lara feel alive is out of this world.  Also it was fantastic to see Lara’s physical appearance change over time as well.  As she got hurt she added bandages, her shirt and clothes got progressively dirty, torn or covered in blood and her face was constantly covered mud… until you went in water…JUST FUCKING NEAT.

Sound:  The voice acting is well done, the angst in Lara’s voice and gasps is overwhelming and can sometimes be annoying to people not playing the game.  My wife came into the room once and asked me if that poor girl is always in pain or trouble…to which I said Yes, yes she is.  The music is also very minimal, the music is there and does get more intense in…tense situations, but if you ask me it really shines in platforming or puzzles as it ads a sense of urgency to an otherwise “un-failable” problem, while not being overbearing.

Gripes:  Ok, if I haven’t said it yet I’ll say it now, I Loved This Game.  Now, even though I loved it, that doesn’t mean that its perfect.  And the number one thing that I have to gripe about is that Tomb Raider is too damn easy.  Even playing on the hardest setting most of my deaths we platforming or me doing something stupid.  The enemy AI would try to flank you but would attempt to do so while you were shooting at them, so they would literally leave their cover and get blasted in the head.  Also if you got too close to an enemy they would usually switch to melee combat and stop shooting at you (great for armored enemies as you could just dodge/counter them to death).  But lets be honest the enemies are not the main focus.  Speaking of too easy each area can be completely cleared at any given time with the equipment you find or already have.  If they went a little Metroid with the equipment (forcing you to revisit areas to uncover more secrets) that could have added more time to this game or given more joy to finding that one last bit of equipment to use.  Also when I say “secrets” I use the term loosely as all “hidden” items are findable on the map and then can be viewable with a GIANT BLUE PILLAR OF LIGHT.   Lastly the controls for Lara felt really loose and took a little time getting use to.  Her doge or “scramble” move can easily throw you off a cliff if you are not careful and if you don’t hit a climbable wall just right you will miss your mark.

Now, again, I understand that Tomb Raider came out before Uncharted but Uncharted did do a lot of things right, so right that you cant help forget sometimes that this is not just another Uncharted game.  From finding hidden treasures, the slightly mystical ending and even using some of the exact same dialog.  Again I know Tomb Raider as a whole came out first but if you don’t think Square Enix/ Crystal Dynamics took some liberty or ideas from the Uncharted series you are only fooling yourself.

Regardless, I can’t recommend this game enough and with the price of the game constantly dropping it is more than well worth the price for such a fantastic (even if stoopid easy) ride.

I Beat It First
(IBIF.co)