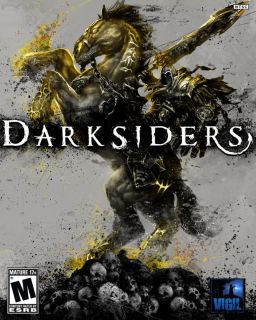 Back to the good ole Bargain bin I go.  Picked up this gem a while ago but other games kept pushing it away.  When I initially picked it up I was less then motivated as I assumed it was another God of War clone.  While my assumptions were correct, it wasn’t fully the God of War clone I was thinking.

Actually its Zelda…Zelda on Steroids.  Everything about Darksiders can be

found in a Zelda game, just you know, with Demons, blood, a talking main character and rated M.   You think Im kidding?  Lets see,  You need to collect 4 pieces of a skull to get an extra “skull” health meter.  You are able to carry a limited amount of health/magic potions as they need to be carried in empty “crystals”.  You eventually find your horse  Epo…er..Ruin and he is summon-able.  Every dungeon gives you a new puzzle solving tool including a Glaive (boomerang) and Abyssal Chain (hook shot), you even had an annoying “sprite” follow you everywhere to point out where to go or give you hints (thankfully he kept the “HEY,LISTEN” to a minimum).  Even the boss battles, as epic as they were, followed the same classic Zelda formula, use the item you found in the current dungeon to attack the boss, repeat 3 times, win battle.  The only things that were missing were the heavy boots and a princess to rescue.  Although this game did almost all they could to copy the Zelda formula, they at least did it very well.

Ok enough about Zelda, this is a review on The Legend of War: Kill all the things…Er Darksiders.  Now Darksiders is far from the perfect game, the controls are a bit clunky, especially in some platforming sections and combat becomes bland very fast.  Every enemy has a “finishing move” option, after you have roughed them up a bit, and is by far the best option to clear out enemies, as while you are preforming these moves the other enemies wont touch you.  However you better like seeing these moves as every enemy only has one maybe two death animations, and while they are gory and epic the first 10 times, seeing war cut the same guy down in the exact same way 1000 times gets stale quickly.  It would have been better if when the icon shows that you can Finish them that if you hit them just one more time (non-finnishing move) that would kill them, but NO, if you accidentally hit them instead of doing the special move they will take another few hits to finally put down.

Despite its few flaws I had a lot of fun on my adventure and constantly thought on how nice it was not to always hear “hiy-hiee-hiyaaaaaaa” every time I swung my sword.  If you are a Zelda fan but are sick and tired of the same cutesy formula or sick of seeing shit like TINGLE pick this game up on the cheap and enjoy.  The Sequel Darksiders 2 has recently been announced so now is a great time to get caught up before the next one.

6 thoughts on “Darksiders. Imitation is the Highest form of Flattery.”