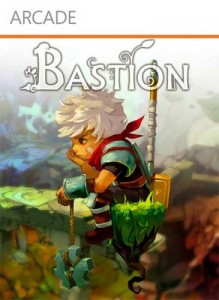 Had a chance to play the demo for Bastion, Xbox 360’s newest arcade release and part of the arcade summer that Xbox does every year.  I have been looking forward to this game for awhile and was happy to get some time with it before making the purchase.  Let me first say that the game is VERY pretty the colorful visuals are a very welcome, compared to the flood of muted pallet games lately, both the levels and characters are all vibrant with a rainbow of color splashed all over.  RAINBOW’D

What really sets this game apart is the “Reactionary Narrative” which makes the game feel like you are listening to a story being told and your “imagination” is the game.  Listening to this suave gentleman explain your characters thoughts and actions really drew me into the game and made me have a stronger link with the “Kid”.  Its amazing how such small change really helps set the tone and feel for the game especially since the “Kid” doesn’t talk and you cant really see his facial expressions too well, it honestly turned this game into a creative title instead of just another dungeon crawler/brawler.

However my short time in Bastion was, I cant say I don’t have a few nic-pics.   It is a download arcade title so I cant expect too much for the visuals but when you enter an armory or store you get a stationary splash screen.  I know its not a big deal but it felt cheap to me and reminded me of a flash game.  Also from what I have seen the game isn’t very long, not to say it doesn’t have its value ie New Game+ but it is something to think about if you want it to take more than a weekend to get through.  Lastly I didn’t feel the controls were very well laid out and when i was fighting a boss some times felt like my biggest enemy was hitting the wrong buttons or not running fully around the enemy, but that will probably fade with time in game.

The game promises plenty of weapons and customization for how you can handle the game, making it a slightly different game depending how you like to play. Again this was only a demo I played and I did enjoy my time in it, I doubt I will be picking it up for 1200 msp ($15) but if I do I will be sure to let you know.