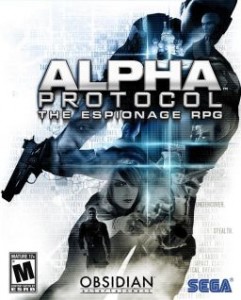 Well I was able to do it!  I beat the game within a week and was able to get another post up.  When I first purchased this game the GameStop employee made fun of my choice.  To be fully honest with you, my expectations were very low what I found was a nice surprise and am happy I made such a mistake.

and a deep story.  The game took me to Russia to the middle east to take out Terrorists, Russia to thwart weapon smugglers, Taiwan to keep the president from getting shot and all while learning about Mega corporation Halbech is behind all the worlds problems.  One of the games greatest and weakest system is the choices that you make.  Much like Mass Effect where you can choose between 3 and 4 conversation options however Alpha Protocol only gives you maybe 5 seconds to decide on your next “stance” on how the conversation will go.  This adds a lot to the realism of the game as obviously you have to think on

your feet a super spy but it also adds A LOT of frustration when making a bad choice that will effect how people think about you or if you get everything done in a mission, but like I said it adds a lot to the WTF do I do realism, as a dood has a gun in your face he is isn’t going to give you 10 mins to think about your options (looking at you Sheppard).

What I didn’t like:  The main Fucking Asshole character Mike Thorton.  God Damn this guy RUINS everything great about this game.  Seriously, its like casting Timothy Olyphant in a James Bond movie (or any movie for that matter).  Mike is so Annoying and retarded he ruins almost any conversation not to mention the “standings” will be VERY vague with options like Joking, Angry and Calm and the shit that would come out of his mouth sounded like he was constantly sarcastic/high.

Also there are a TON of NPC characters and relationships to build which makes for an interesting game and a high reply value but the people are just not worth your time.  I was building “relationships” with other spies, friends and women (like any good spy) but I didnt give two shits about any of them as there was almost no character building (except for doceas, but who reads lol) of course your conversations would add more into the characters but you know how those go *CANT EYEROLL HARD ENOUGH*

All in all if you can get past the idiot that is Mike and find a way to navigate the senarios (cheat) then you have a nice little game that is going to get your attention for a little while, especially since its so cheap, and you can beat it and return it within a week.  Or keep it and work on the new game plus features , if you are a braver man than I.  If you do decide to give it a shot just remember…