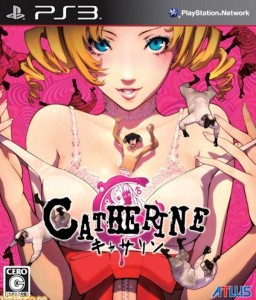 Over the weekend I had a chance to play the Demo for Catherine.  Now I don’t think there can be a more niche game out there (an anime puzzler).  The game played like an old school block puzzler pushing blocks to proceed and climb up a tower.  However this tower is in his dreams and his dreams are trying to kill him.  In one of the levels I was being chased by a pair of hands and would get stabbed with giant fork if I was too slow.   Now whats interesting about Catherine is that the Story and style caught my eye more than the game play.

The entire game is made a la anime style and the cut scenes between levels vary between beautiful HD anime segments and some of the best cell shading I’ve ever seen in a game.  Whats also interesting to me is the game is rated Mature but it doesn’t just seem to be for violence and sex but mostly for the mature theme of the game.

Finally a character that’s not just a gun touting bad-ass and is just some regular guy trying to deal with his own life and problems, it seemed to bring a different element to the game made it more intriguing to me that this might be more of a mental game than anything else.  Early reviews of the game have been mixed, however,  you can tell if the reviewer was otaku or not because they either loved the game or didn’t really like it.

We will see when I pick this game up later this month and once I BEAT IT FIRST.

9 thoughts on “Catherine caught my eye…Will I die now?”