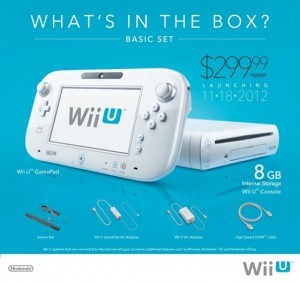 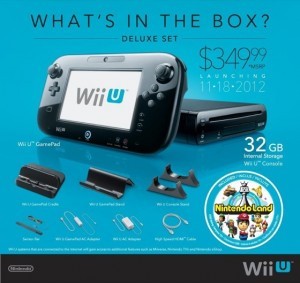 Last night/Today Nintendo finally came out of the closet with their new console the Wii U.  The Wii U is set to release November 18th with 2 price points $299 for the Basic and $349 for the Deluxe (see pictures for an idea of what each version comes with).  The main difference, outside of the color is; the deluxe version comes with a few extra handy charging cradles, a copy of Nintendo Land and 32 Gigs of storage over the basics 8.  And depending on how quickly the system eats memory the extra $50 might just be well worth it.

The following titles are scheduled to release to the new console between launch and 2013:

Here is where my first problem begins.  Take a gooooood long look at this list of games and quickly shout out the last 5 Nintendo games you purchased (any console ever)  I’m willing to bet that of those 5 games, 3 or more of them were first party Nintendo titles ie a Mario, Zelda, Metroid or any variation of.  Now look back at the list, What game are you REALLY looking forward to that wont already be on the other consoles.  I’m not trying to be a nay-sayer but this could be a big problem for the Wii U.

Here is a video too where you can watch Satoru Iwata make awkward jokes while talking about the Wii U if you would like waaaaay more information…with German subtitles haha.

2 thoughts on “Wii U: Release Date and Pricing Announced”