So Eric and myself were having lunch at a very lovely establishment, and as we are one to do, we got started talking about video games. We got on the topic of Assassin’s Creed of my great hatred of them adding mortars to ships in AC4, which is even greater than my hatred for them having mortars firing at ships in AC3. ANYWAYS, we started to talk about what the future of the franchise might look like. 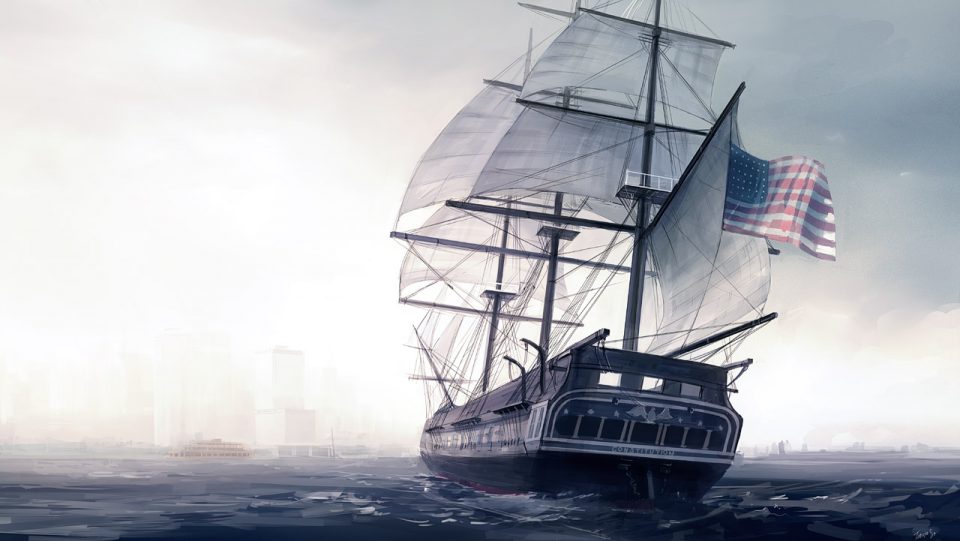 If AC5, or AC4.5, whatever it’ll be called continues with the current theme of AC3 and 4 with the Age of Sail and the Americas, it could jump to the War of 1812. Some people seem to dismiss the importance of the War of 1812 in history, as the treaty just put things back to the way it was before the war, however many famous battles took place, and the US Navy, in it’s infancy, had gone up against the most powerful Navy the world has ever seen, and went toe to toe with it. No other Navy in the world could match the British’s seamanship, yet the US proved its equal in this war. Joshua Humphreys designed 44-gun and 38-gun Frigates that made up the initial navy proved more than British frigates could handle, so much so that eventually the Royal Navy prohibited single ship combat against an American 44, often described by the British as disguised ships of the line. This is where the USS Constitution got its nickname “Old Ironsides”, and had other notable US frigates President and United States. This is where you get the US Navy quotes “Don’t let them take the ship” and “We have met the enemy, and they are ours.” This was the coming out party for the US Navy and proved that the Royal Navy wasn’t invincible. Lastly, its when the Star Spangled Banner was written during the attack on Fort McHenry. Ok, history lesson over. Sorry about that, but I tend to get fired up about my War of 1812 and early US Navy history. How does this work into the series? Well we have the Desmond’s bloodline established in the America’s, and this could even work for an older Connor. This could be expanded upon to include the early years of the US Navy, and not just the War of 1812 as well. You have the Quasi War with France that will take you to the Caribbean, and the First Barbary War that will take you to the Mediterranean. Oh look, we just connected the entire series. Well, that was neat. So this is a pluasible direction for the series. Oh, and if you too find this era interesting, check out Six Frigates: The Epic History of the Founding of the US Navy by Ian W. Toll. Another possibility is if it fast forwarded to the Civil War. Gatling guns mother fucker! It also features a lot of rich history…for the US, and not much else for the world. However, if we look at Templars vs. Assassins, you get the Templars creating a rip in the US they failed to set up the way they wanted in AC3, so they want to destroy it. I see this as possible only for the feud between Assassins and Templars fighting for control, with a slightly updated setting and some cool new weapons.

In our discussion, we also talked about the possibility of it moving to WWI or WWII. You know, where the US is back to back champs. This would add radically different weapons to the mix, and can send us to new locales in Europe and Asia, while keeping the bloodline ties in the US. Who doesn’t want to mess around with tanks?! Do some trench killing in WWI and some mass murdering on the beaches of Normandy in WWII. As for it tying into Assassin’s vs. Templar’s, Eric mentioned that the Archduke Franz Ferdinand could of been an Assassin, who was killed by the Templar’s.  Personally, I think such a radical change might be left for AC6 or so.

Another possibility that didn’t come up in our lunch discussion was the Wild West and the building of the railroad. Plenty of money lying around for the Templars, and plenty of bloodshed. No real war to wrap around, but the real war in the series is the never ending war between Templars and Assassins. Where do you think the series is headed, or where do you want it to head? Tell us in the comment section below!