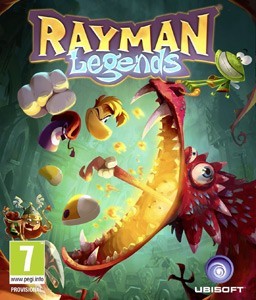 Difficulty: no option but later levels are HARD

Rayman is back to curb stomp your face with cute-ness.  Since I loved the original Rayman Origins I couldn’t wait to get my hands on the sequel Rayman Legends.  Imagine, if you will, when I found the game would only be released on the Wii U.  Thankfully Ubisoft came to their senses and decided to release the game on popular platforms (OHHH Wii BURN).  What I found was quite possibly one of the most packed games, with tons to do, and honestly only about 15% of it wants to make you cry from defeat.

Story:  The Rayman Games don’t really have a story, much like old platformers, there is a bad guy doing bad stuff….run to the right and stop him…  And you know what, that is fine, here we are saving our friends (all 700 of them) from the clutches of some magical bad men (go away bad men).  Needless to say the Story isn’t what keeps you playing, its the addictive gameplay.

Graphics:  Not much has changed since the first game, there are a lot more 3D elements but its still a 2d platformer at its heart with ultra cutesy sprites.  The lighting effects also stand out and are implemented a lot better as well than Origins, bottom line, if you liked Origins, you’ll like Legends.

Gameplay:  The gameplay is at solid as ever, and playing on the PS3 this time had the controls feeling even more precise (played Origins on XB).  However, be prepared that behind its cutesy colors and cheerful overtones this game is brutal.  Get ready to have every aspect of your patience tried again and again (especially if you are going for 100% completion) as Ubisoft has made this kids game into a cold blooded killer.  Not to say its a bad thing, the problem with Mario games now-a-days is that there isn’t much of a challenge, if you are looking for a challenge then look no further than Rayman Legends.  I also mentioned that this game is packed with content, as a matter of fact the ENTIRE previous game Rayman Origins can be unlocked as you play Rayman Legends, obviously this is without its story or unlockables but the levels are still there and are still fully playable with your new characters.  There is also 3 daily challenges and 1 weekly challenged released constantly, these new “levels” usually ask you to get somewhere as fast as possible or see who can go the farthest without dying.  But the really interesting aspect is playing against other players online.  I’m not too ashamed to admit that I spent more than a few hours trying to beat my “ghost” competitors for no other real reason besides pride haha.

Sound:  A lot of the same music has carried over from the previous allowing you to feel right at home as soon as you start.  There are even Music based levels played to popular public domains songs like Black Betty or Woo Hoo ( no, the other one).  While these song levels aren’t much of a challenge, at first, the songs will get stuck in your head or at least make you smile from charm overload.  There also appears to be a lot less chatter in the game, which is fine, but I miss hearing all the different types of gibberish.

At the end of the day I still love Rayman, if you have never played a Rayman game before Rayman Legends is the best place to start as it gives you all current gen offerings in one game.  And with the daily challenges and the constant desire to gather more Lums Rayman Legends will keep you playing for weeks, and then you will hate the game haha.