The first movie in the Rorouni Kenshin live action trilogy finally came to US theaters, and we went to see it. Eric loves Rorouni Kenshin, so much so his gamertag is Battousai311, so we really wanted this to be good, despite many live action adaptations of beloved anime/manga don’t turn out so well. Avatar: The Last Airbender and more recently Attack on Titan come to mind. Don’t even get us started on Dragonball Z’s live action adaptation.  If this movie failed, well then, it wouldn’t be alone in that regard.

Luckily for us, it didn’t fail, but actually did it’s source material justice. If you are not familiar with the story, Rurouni Kenshin takes places 10 years after the beginning of the Meiji era in Japan, Kenshin roams the land as a wandering samurai. During the war that brought upon the Meiji era and the end of the samurai, Kenshin was known as Battousai the Killsword. He had served as an assassin, and was deadly effective, earning him the reputation as one of the wars greatest warriors. Now however, he wanders the land looking to help people and not kill them. Keeping his identiy as the battousai a secret, he carries with him a reverse blade sword, with the edge turned towards him. This is where the story picks up, as he must test his resolve not to kill people, but save them. 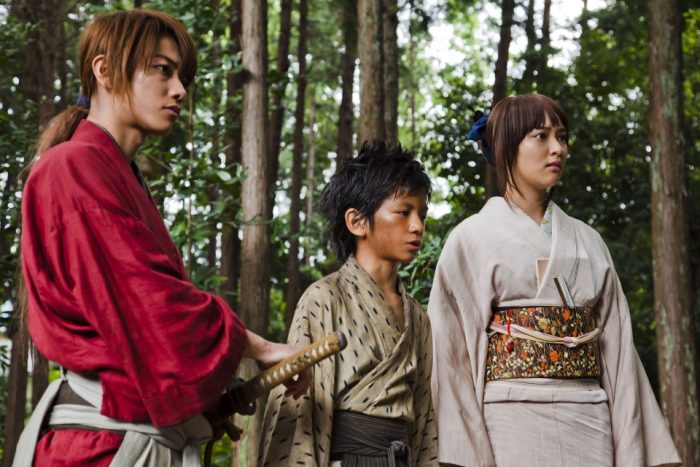 There were only a few minor discrepancies that we noticed where it differed from the anime. The major one being in Kenshin’s fight with Sanosuke, where Kenshin didn’t break his zanbato as he did in the anime. The interactions between Kenshin and Karou are spot on for fans of the series. Yahiko’s even teases Karou that if she doesn’t learn how to cook better that she might lose Kenshin. The overall story goes up to around episode 11, with only slight adjustments to the timeline to fit the story in a logical movie format. If you haven’t watched the series in a while, I doubt you will even notice it. The casting in the movie was one of the best parts, as all the actors resembled their 2d counterparts extremely well.

They hit the sweet spot with this adaptation, as we had Eric’s brother in law watching the movie with us, who has never seen the anime or read the manga before, and came out of the movie enjoying it, noting the tie in to history portrayed in this fictional take on the early years of the Meiji era. I would recommend you go see the part 2 September 12-14th, and part 3 October 3rd-5th. You can find tickets at Funimationfilms.com.