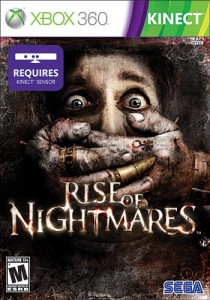 A romantic weekend getaway for two with my girlfriend, to an all-inclusive haunted castle in the back woods of a third world Eastern European country, sounds like a fucking fantastic time to me!  We will be departing on a beat up old train, in the middle of a terrible storm and heading through some cursed woods, crashing into the first river we come across!  This enchanting fairy tale getaway will only cost us one hefty payment of 59.99!  BUT if we act now, within these next five minutes we will receive one pair of BRASS KNUCKLES! SOOOO SICK BRO!!!!!!!!! 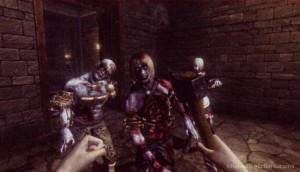 Rise of Nightmares, Xbox 360’s first mature game for the KINECT.   This little entertaining gem features blood, gore, intense violence, partial nudity, strong language and suggestive themes.  Alright, on my first tangent I have seen suggestive themes on the back of videogame boxes for over the last decade, WTF does it mean? Could it be anything from Bobby wanting to kiss Jessica, or does it have to be more intense like Jessica wants to play pocket pool with Bobby?  Whatever it means it’s dumb, the game is already Rated M for other shit, and I am sure that Jason’s mom isn’t going to let him play it cause of the Gore and Nudity rather than the stupid suggestive themes! Stupid. Dumb. Shut up! 😉  As for the first gory KINECT game for the Xbox 360, it exceeded my expectations for blood and gore.  You as the gamer get to witness hordes of the undead getting hacked smashed, pounded, sawed, impaled and blasted into little bloody pieces.  Besides the undead you get to witness everybody else on this adventure get tortured and murdered throughout the game.  As for the nudity and language I think I got to see a couple half boobs and heard a “Shit!” and “Fuck!” here and there but nothing these sailor ears have not heard before.  I will say it was quite refreshing not seeing my avatar riding a raft down some insane rapids, or running the hundred meter dash at the Olympics. 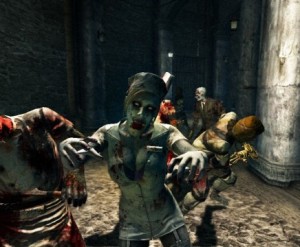 I was totally shocked how well the KINECT responded to my movements throughout the game.  Hacking slashing and boxing the undead throughout the game was a lot of fun, and not only could you punch the shit out of the enemies but you could also shove your boot up there ass with one swift kick.  I did realize how outta shape I am, cause after about three hours of swinging and kicking the air, I found myself with sore arms the next morning.  The only thing that took a little getting used to was the walking motion where you basically leaned forward or backward depending on the direction.  You would also move your hips left or right depend which way you wanted to walk.  This is where the problem started if you moved just a smidge you wobbled, so my character probably looked like he was shit face stumbling around every time I played until I got used to it. NOT to be a spoiler but you do get a couple different weapons where you power up a charge and thrust your arm forward looking like RYU, GOKU or SCORPION which was pretty awesome!  I’m not going to lie, my inner nerd came out multiple times where I screamed “HADOUKEN”, “KAMEHAMEHA” and “COME HERE!”

Probably the two biggest let downs were the story and the graphics in the game.  I know it’s a KINECT game but compared to other Xbox 360 games the graphics were pretty fucking garbage.  If you have seen gameplay of the graphics online then you’ll know it looks like something out of the old school video game House of the Dead. So that was pretty disappointing but I got over it pretty quickly accepting that it was a KINECT game not a regular game.  Besides the shitty graphics the story was pretty much garbage too.  Typical set up nothing caught me off guard and I pretty much could call the ending from the beginning of the game.  Well except for the shitty ending.  It does set itself up for a sequel but you would never know that unless you sat down and wasted your time watching the credits. Seriously,  I can’t stand watching the credits and I really can’t stand when the game gives you more to the story or more achievements for watching the credits.  Who likes to watch the fucking credits?  If I am not going to watch them in my favorite movies, why the fuck would I watch them in a shitty ass game?  I don’t care who the assistant director of the costume design is!! 😛 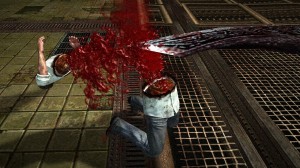 In the end the game was cool and something different; the controls were far superior to any Wii game that tried to do this in the past.  To be honest with you if they ever do make a sequel, I would probably buy it just so I could smash the faces of the undead one more time!  If you love your KINECT and you are looking for something different I recommend this little GEM!

5 thoughts on “Rise Of Nightmares”