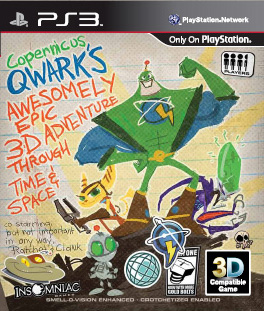 Ratchet and Clank: All 4 One

Price : Free (or the soul of an original PS3)

I know, I know, that’s not the real box art.  It is, however, the opposite side of the cover and more game companies need to follow suit because it’s way cooler than THIS.  Anyway… As many reader know, I original 60GB PS3 met an UNTIMELY DEMISE and I was forced to wait to purchase a new unit on Black Friday.  My patience was rewarded with a $50 knock off the normal price AND 2 free games, this being one of them.  The question that I kept wondering was whether it was a game worthy of the $60 price tag it still goes for on sites or not.  I mean it’s a pretty new game that came in a sick deal on Black Friday, what’s the catch? Well, click the READ MOAR to find out my take on the game.

I’m going to try a different format than my normal review rants, to see if I can keep on track better, so bear with me for this one please 🙂 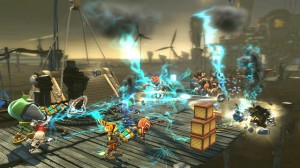 There are many Ratchet and Clank games to pull from in the past and this game needed to be just as good, if not better, than all of them.  The basic premise is that it’s a R&C game x4, a first for a series that has always been single player.  You can play co-op either side-by-side on the couch or over the internet, or you can be a loner slug and play by yourself.  Unfortunately my CALL TO ARMS didn’t result in any co-op takers (probably because nobody else has the game) and I only got a limited amount of 2 player play when my friend Matt came over.  I will say this, they do make the game accessible and playable in single player, but co-op is the way to go for one reason… The Clank AI can be even dumber than AI from a 90’s FPS.  Ok, maybe that’s a little harsh, but I swear there were times that I was playing this by myself I thought I actually thought that they replaced his character with a retarded defective unit.  Granted this is Insomniac’s first foray to adding multiplayer in, and they did a great job with the co-op, but they really need to stop punishing loaners and fix this if they plan on doing future games.  The game mechanics are really good and do a good job of getting players to engage each other and work as a team as they go along the story.  As you go through, the characters will taunt each other when they are doing better, and get angry when they are doing worse.  They also added in a couple of gadgets that make the game a bit more than a mad dash to the finish.  All-in-all I will say that it’s gameplay is both “functional” and great, just make sure you have friends with you. 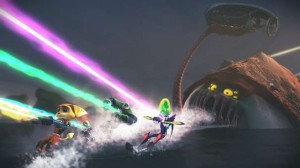 This is one area that Insomniac never has a problem with.  Colors are bright and dark in the right spots and they always have highly detailed, albeit odd looking character models for everything in the game.  Explosions are explosivey, beams are beamy and water looks like water.  I have never had anything to complain about with R&C games in this category and I won’t start now.  Playing these games just so you can laugh and marvel at the character designs is entirely recommended.  Shoot, I don’t even think that I saw any glitches with clipping which even the best game studios have problems with. All of the CG cut-scenes are well directed and include great comedic banter.  They also added a nice little bonus at the beginning.  This game requires a good amount of information to be installed on the HDD before play and most game designers give you a pretty black screen with a progress bar on it to entertain you.  Insomniac decided to do a fun little space news expose that runs during this, giving you something more entertaining than sitting on your thumbs (although you are welcome to do that during this portion if you want).

Yes, this does require it’s own section, and I’ll tell you why.  Every ratchet and clank game starts out with the normal basics of  a blaster, a grenade launcher and a rocket launcher.  After this though the weaponry changes dramatically.  Insomniac really puts their minds together and tries to come up with the most ingenious weaponry they can think of.  Previous great weapons include the Chimp-o-matic (which turns enemies in to monkeys), the Groove-a-tron (which entrances all enemies to dance if they are w/in the range of the disco ball) and the Tornado Launcher (pretty self explanatory).  The only additional weapon that seems to come to all of the games is my personal favorite, Mr Zurkon.  He’s great because he has always given you another fighter that has your back and always has a plethora of one-liners to keep you entertained (see photo).  Unfortunately they did kind of Nerf the weaponry down (even Mr Zurkon) due to the inclusion of up to 4 players.  You used to level your weapons up as you played through the game, and the weapon would evolve as you gained more experience with it.  Here though, you have to pay for upgrades (most likely to incite competition in bolt collecting) and they aren’t too special.   With most of the games they also include a super secret weapon, that you have to unlock by doing various chores, called the RHYNO (my favorite rendition was the one from Tools of Destruction as it shot out almost all ammunition and played the 1812 overture in the process).  This games version is a giant Mech suit that the character wears, which looks really cool when all of the characters are running around in it.  They also instituted a teamwork damage bonus that kicks in when the players start shooting the same enemy with the same weapon.  This is very beneficial as I found myself playing to the last round in many sections towards the end even with the bonus. 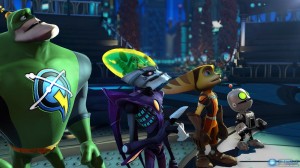 All in all, I would say that R&C:A4O is pretty good game.  The single player can be annoying at times but is still passable for any platforming fans.  Would I pay $60 for it?  No, but that probably because Amazon has it on special right now for $26.32 with free shipping.  I don’t think I can recommend paying full price for it, but then again I always recommend getting the lowest price possible for any game.  If you can find it for sub $40, I would definitely say make the purchase (just make sure you have your friends buy it too).  All that I know is that I came, I saw and I BEAT IT FIRST!

One thought on “Ratchet and Clank: All 4 One”