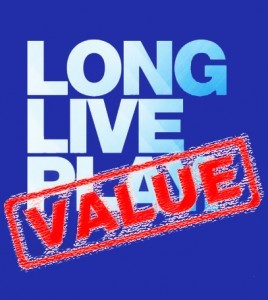 Not much to see here folks… Hooray for Dark Stalkers and Scott Pilgrim DLC!

A dark tower looms over a wasted world. Infected by the diablosis, the living battlefields within shift and twist while a lone warrior, Syd, fights his way to the top. Are you ready for the tower?ESRB: M // File Size: 6.2 GB

Explore your creativity, master your emotions, and propel your perception to new heights with Psych Yourself! The follow-up to Test Yourself: Psychology, one of the top-selling indie PSN games of 2011, Psych Yourself comes loaded with fun tests designed to evaluate your Creativity, Emotional IQ, and Perception, so delve into the depths of your psyche and Psych Yourself today!ESRB: E // File Size: 501 MB

‘Puzzle by Nikoli V Sudoku’ contains 50 sudoku puzzles. ‘Sudoku’ is a puzzle in which you place numbers from 1 to 9 into a 9×9 grid, divided into horizontal and vertical lines and 3×3 blocks, filling up all of the spaces with the numbers.ESRB: E // File Size: 49 MB

The ultimate blend of RPG and sim game, Favorite Dear ~Enkan no Monogatari~ provides a unique, character-driven experience with a cast of fantastic and unforgettable heroes. The world is hurdling towards certain doom and its final hope rests in the hands of one hero and his peace-loving angel…File Size: 270 MB

A chaotic real-time strategy RPG where dozens of characters battle it out for control of Logres. Test your mettle as you command your troops in combat against other would-be kings. Form alliances to ensure your conquest and bring peace to the land.File Size: 70 MB

Enjoy the classic game of mahjong as you square off against 3 adorable fortune tellers. Even if you can’t claim strategic superiority, your opponent will still gladly read your fortune and await a rematch. Train hard to prove your abilities as a mahjong master and defeat all challengers.File Size: 293 MB

Race across 16 of the fastest tracks in the TransInternet Speed League and come in first over your equally reckless competition.ESRB: E // File Size: 171 MB

Experience the timeless classic of The Wizard of Oz reimagined in a fantastic new adventure. Little Dorothy has found herself in the mysterious land of Oz and must solve her problems with the use of special magical items. Can you return peace to the magical land beyond the rainbow? Follow the yellow brick road straight to the cutest RPG you’ve ever seen.File Size: 298 MB

Growing up, you were constantly moving from one town to the next. You didn’t really have time for friends or romance. One day, you receive a letter that changes everything with one simple sentence: “I want to see you…” Who could have possibly sent this? In your head you’ve got this secret admirer narrowed down to one of the 12 girls you met during your tumultuous childhood. Immerse yourself in this classic dating simulation and uncover the secrets of this mysterious letter.File Size: 428 MB

Welcome to the exciting world of TRUMP! Enjoy 10 of the most popular card games around including Seven Bridge (the Japanese version of Rummy), Speed, Blackjack, Poker, and more!File Size: 71 MB

Command the various Chinese factions vying for power in this historical fantasy based on the Romance of the Three Kingdoms novel.ESRB: T // File Size: 4.1 GB

Scott Pilgrim Vs. The World The Game Ultimate Edition ($14.99) Looking for a game to play with a friend? Try out the definitive pure co-op game for an over-the-top, explosive action experience! Download the demo today!File Size: 1.6 GB

Darkstalkers Resurrection updates to two games for the price of one – Night Warriors: Darkstalkers Revenge and Darkstalkers 3. These feature classic gameplay and unique characters as well as a host of new features, including a variety of HD visual modes, online play with 8-player lobbies, YouTube replay sharing, improved challenge modes, dynamic awards, and unlockable extras. Embrace the dark!File Size: 336 MB

In a world where modern societies as we know them no longer exist, Fuel Overdose is bringing the action racing experience to a new level. Customizable weapons and vehicles, grappling hooks, climatic catastrophes as well as a whole fighting system are at your disposal to finish first. You’ll have to play hard, but also to play smart as every decision made before or during the race has an impact on your chances of success.File Size: 166 MB

Karma, skills, and other data acquired in the demo version can be transferred to the full version.File Size: 878 MB

Atelier Ayesha: The Alchemist Of Dusk

Scott Pilgrim vs. The World The Game