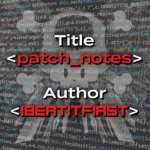 Wyatt, Diego, Greg from Everook join the I Beat It First crew to discuss their latest game, Damaged in Transit! Damaged in Transit is a split attention puzzle game where you attempt to deliver packages with 2 autonomous drones at the same time. Beware of spikes, fire, and water as you change the direction of gates just in the nick of time. Worst than those traps though, are the game jams these developers have participated in to get to this point. Damaged in Transit it out now on Steam and Nintendo Switch.