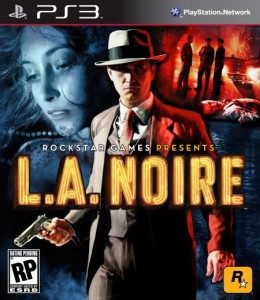 Difficulty played: no option, but I did leave all default settings

L.A. Noire is a hard game to review or even think about reviewing.  The game is different then anything I have ever played before, yet at the same time seemed so regular like I’ve been playing this game all my life.

Let me start by saying L.A. Noire is not your basic RockStar game as it is one of the first times that you take the role of a cop and not just any cop one of the best, straight as an arrow, cop.  This isn’t your get any car/ gun and blast the shit out of everything you see game.  This game will actually grade you on your performance to “act” like a good cop, like no car accidents, no civilian injuries and no city damage.  If you have played any Rockstar game in the past (GTA RDR) this is a major change in how we normally play, but in L.A. Noire this is not the main focus the Star in this 1947 jazz club is the human interaction and investigations.

In L.A. Noire you take the role of Cole Phelps, up and coming detective straight out of the military after his run at Japan during WWII.  You will then guide Cole on a series of cases all over metro L.A.  While on these cases it will be your responsibility to collect evidence and interrogate witnesses/ suspects.  Like I said before the real meat of this game comes from the human interaction, the facial visuals are like anything I have ever seen as you swear you are watching a movie more than playing a game, and it is up to you use your evidence

to guess if the person is telling the truth, lying or just plain doubtful.  Guessing correctly or incorrectly can change the outcome of the case and will effect your rating at the end.  This adds some replay to the game but not much.   Now I’m not going to go into detail on this game as I’m sure you have heard it all before on how amazing it is but I will say a few key things, be sure to get the game on the PS3 if you can as the Xbox 360 version takes 3 disks!  Also keep in mind that this is more of a puzzle game and less of an action game.  Yes there are segments of shootouts and crazy high speed chases but the majority of the time you will spend talking to other characters to solve the crime.

What I didn’t like, its hard to say,  I love puzzlers and I also love story (MGS4 fan right here) but this game made it very hard to care about Cole or anyone else for that matter.  Each mystery was like its own episode of  Law & Order: L.A. Noire, where the case would be solved but there would always be a little extra to bring everything together and that was your day by day, of course the game had a “larger” story or case that would be put together as you went along but the larger story (after really thinking about it) was very weak.   Throughout the entire game you barely find out anything personal about Cole there are little tidbits that will get released with small talk or in the short flashbacks but nothing to really make you care about him especially in the later cases.

Every moment you have control of Cole you are on another case and being followed by your partner.  There is never any down time or alone game play, hell I didn’t even know Cole was married till about halfway through the game.  Now I can understand the direction Rockstar was taking with this character and how keeping him a mystery might add to the main story, but for me,  it made me not care about the guy, and for a 35+ hour game that’s not very good.  I mean, think about it, in RDR I WAS John Fucking Marston and I would murder you for less than I give, and I give a shit.  In L.A. Noire I never had that connection with Cole or any of the other characters and that continued to bug me right up to the predictable ending.

Now I’m not trying to dog on L.A. Noire, I loved to play the game and have almost achieved 100% completion, not easy to do in Rockstar games without loads of time and that  should show that I did enjoy it thoroughly.  What I will say is this, if you are looking for something different then anything you’ve ever played and enjoy a good mystery pick this game up now.  If you are an action buff and only own Call of Duty games looking for the next GTA you may want to wait on this one.   L.A. Noire will go down as one of my favorite games this year I just think that the holes left in the game destroyed a lot of the hype for this game for me.  But hey Tell me what you think maybe I got it wrong but one thing is for sure…