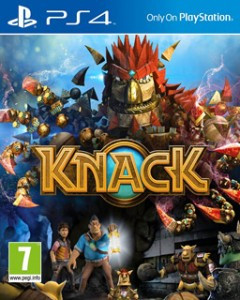 Time to Beat : About 14 Hours on Hard

Only available on PS4

Despite its cutesy look and Saturday morning cartoon story line, Knack is actually a decent action platformer and, if anything, offers a small look at the awesomeness that is to come with the PS4.

Story:  Let me settle with you hard here right off the bat, The story for Knack is bland at best.  What could have been an amazing origin story for Knack and the mysterious Relics that seem to power the world, ends up being just a petty rivalry between Knack’s friend/creator and another scientist.  There where so many plot holes and situations where “meh, its fine for now” only to never be resolved again.  Multiple times throughout Knack it would hint at a better/deeper story..Love, Oppression, Who am I?, Mysterious Ancient civilizations…None of these will be explored or talked about once they are introduced, the game just flat out ignores them.  Now, remember, this is the PS4’s “kiddy” game so the theme was kept lite and the story very simple…Knack himself even points out that he is not the thinker of the group and just carries out orders.  Bleh

Gameplay: Controls are uber simplified, jump, attack and dodge…How they could make 3 actions feel off and clunky is beyond me.  First of all lets start with the Fixed camera,  That’s right its a lush 3D world and you can’t even move the camera around to see all of your enemies.  More than a dozen deaths were because of a cheap fixed camera that would hide people off screen or not allow me to accurately judge my distance for punches.  Second, Knack plays like he is covered in molasses, especially as he gets bigger and if you miss a punch to an enemy get ready to die, especially on Hard as the game is not forgiving at all.  The jump attack is your best bet but it seems to do half the damage of a normal attack, no to mention you bounce back and pause after every jump attack, what kind of shit is that?  OK I just hit you so now Ill pause for a moment so you can kill me…UGH.  Lastly is the dodge, using the right thumbstick you can make Knack dodge in any direction…about 3 inches.  Jumping into Hard it was prob my own fault and had a higher learning curve, its true however, that after a while things started to click but the lack of a run option or more combos/abilities really felt limited.

Graphics: Ok, forgiving the cartoony feel of the characters and Goblins (yeah there are Goblins for some reason) this game is gorgeous. The details in the scenery is outstanding and while screenshots don’t do it justice the crispness of the game is like fresh lettuce, now dats crisp.  Climbing up a cliff or large area to see where you were before way in the distance is very cool, and the particle effects are amazing.  Every time you die Knack bursts into pieces and at times that can be more than over 100 parts scattered about, pretty neat.  Alternatively some areas are very bland with repeating patterns and again the fixed camera doesn’t exactly let you experience, what beauty Knack does have, fully.

In the end Knack is a release day title, and the only release day title that is original and Kid friendly.  So if you were some parent who bought their spoiled kid a PS4 on release day this is really your only choice for now.  For anyone else this game can be a fun distraction from more mature titles and, like I said, works as a great bench mark to see what can come (Imagine Uncharted or a Crash Bandicoot game with this power *drools*).  One thing I will say is Knack oozes in replay ability, there are more than enough hidden collectables to warrant playing the game again, also upon beating the game you are rewarded with two challenge modes a time trial and hoard battle arena.  While tacked on additions they are actually quite fun and can extend the play time (especially when there aren’t any other games to buy).

One thought on “Knack Review”