Killer Queen has become my obsession ever since The Grid: Games and Growlers opened up in October of 2015. A simple 5 vs. 5 arcade game that become so much more so with all the strategy involved. What’s Killer Queen you ask? Well let’s jump into that.

Killer Queen is a 5 on 5 arcade game spread across 2 cabinets, complete with beer (or drink, but mainly beer) holders. It was created by Joshua DeBonis and Nik Mikros. They started out working together making field games, then decided, hey, you know what’s cool? Arcade games, and we should turn Killer Queen into one. What they created is an indie arcade game that is simply amazing, and everyone should play it (I’ll post up later in the article where to find it, if you are lucky enough to be near one of these rare beasts). 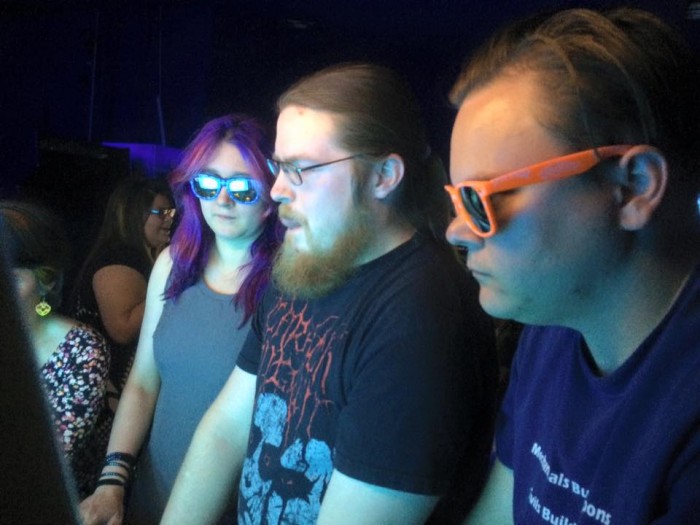 The simple part of Killer Queen, you have one joystick and one button. The joystick can move left or right, unless you are the queen, then it can move down. The button, it’s jump. The best way to describe it comes courtesy of Eric, Joust on steroids. There are 3 ways to win, kill the enemy queen (middle controller on the cabinets) 3 times, collect berries and fill your hive, or ride a snail into a soccer goal. That’s the basic principles of it. 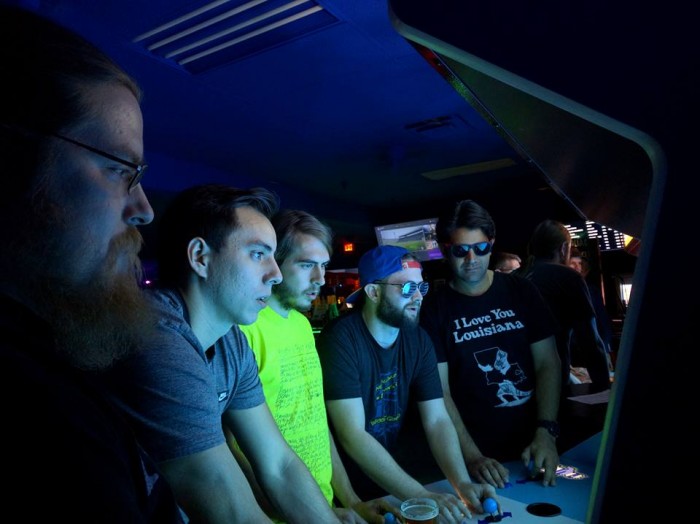 Now to dive into the different positions. As I said earlier, the Queen is the middle controller on the 5 person cabinet. The other 4, 2 flanking either side of the queen, are workers. Every map has 3 warrior gates and 2 speed gates. A worker can grab a berry and walk into one of these gates and transform into a warrior (in a warrior gate obviously) or you can go into a speed gate that gives you, you guessed it, speed, making you faster. You can only get speed as a worker, but if you get it and then become a warrior, well then, you are a drugged out warrior that bounces off the walls. 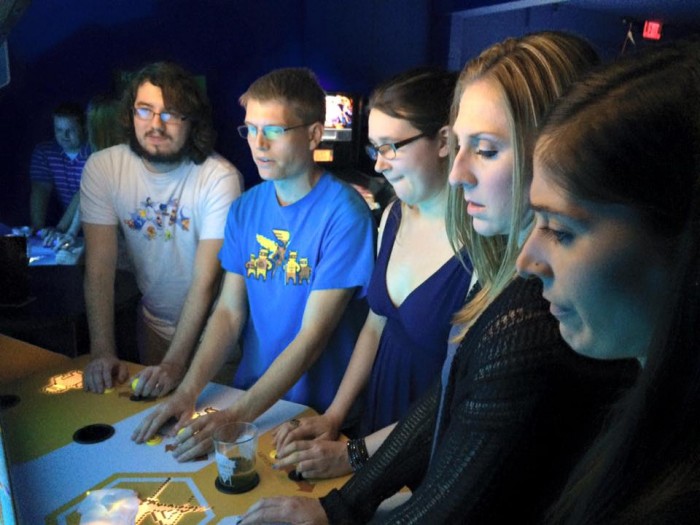 Now that we’ve established that there are warriors, workers, queens, and drugged out lunatics, let’s tell you what they all do! The queen is responsible for not dying 3 times and losing the game for you. Oh, and they can also dive down, fly, and kill people. They also control gates by flying over them, changing them to your teams color (Blue or Gold, depending on which cabinet you are on). So the most important things for the queen to do is, not die, control gates, and not die. Warriors are workers who have transformed by putting a berry into a warrior gate, and thus they gained the ability to fly and carry a sword. They can kill, and that’s basically it. So go fuck shit up and kill the queen, or guard the other team’s hive, or keep people off the snail, just kill, kill, kill. The workers on the other hand can’t fly, they can only jump. They are responsible for gathering berries and putting them into your hive, and they can also ride the snail to your goal, and eventually, victory. Oh, and the drugged out lunatics on speed? They make the best snail riders, as they share their drugs with the snail, making it move faster. How do you kill people you ask? Like in Joust, you are either higher than them, or like the sad fate of Porkins in Star Wars, you come from behind. 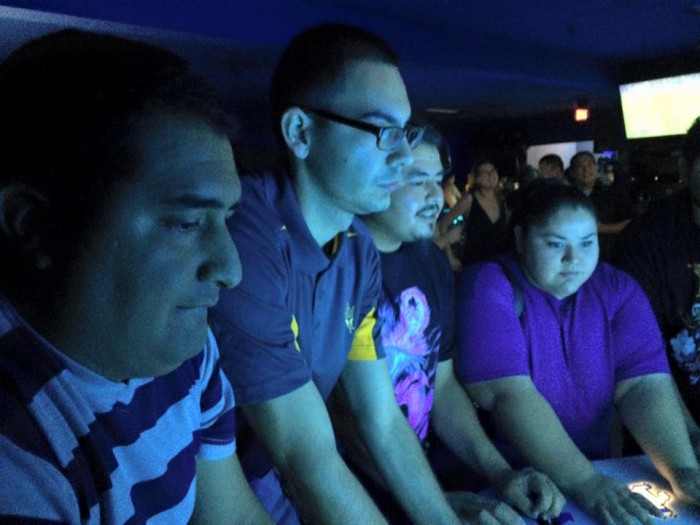 As you can see, the game itself isn’t nearly as complex as some games these days, making it easy to pick up. On the other hand, it lends itself to multiple strategies and can be difficult to master. Do you go for snail while flipping off your opponents? Do you go full military and gang up on the queen and make the other team feel like shit? Or are you more economically conscious and want to collect berries? Veteran teams usually attempt at least 2 of these in various fashions to achieve victory. 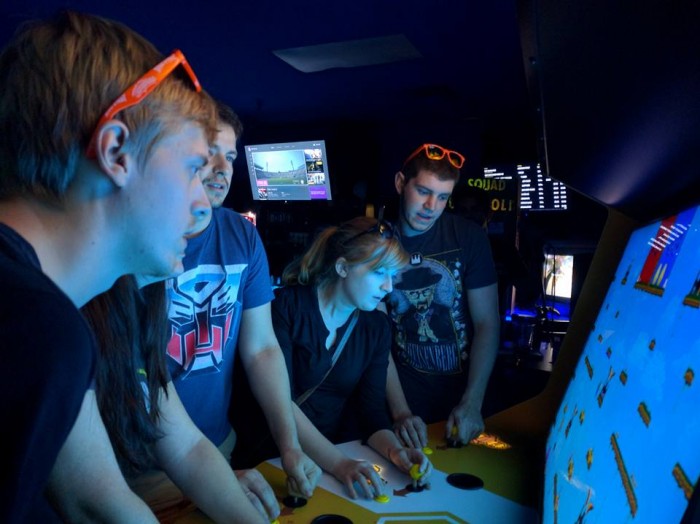 So, where do you play this game? Well, you can head over to the official site and look at places that have cabinets, as well as links to the various groups dedicated to the game that run weekly league nights. What’s league nights you ask? League nights are where you just show up with 5 people and create a team, or if you don’t have 5 friends, you just sign up as a free agent and hop on a  team and play games in a best 2 out of 3 format. The nights are done round robin, so you just hop in rotation and stay as long or as little as you like, show up late, leave early, that’s up to you. Also, most places that host league nights put Killer Queen on free play for league night, so just pay for beer and enjoy. 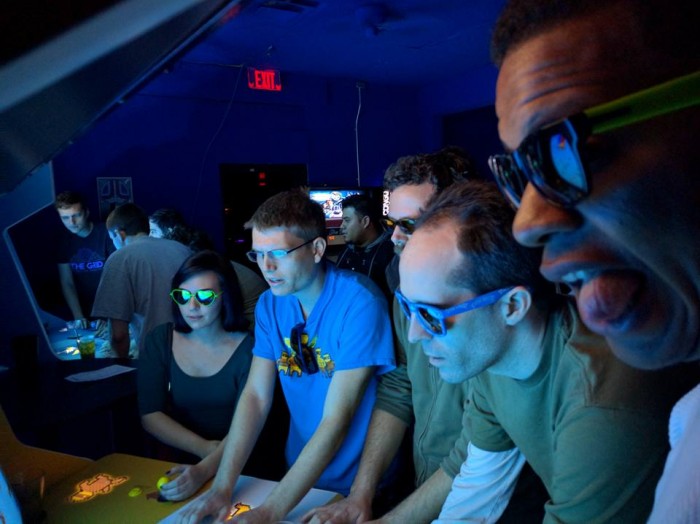 If you haven’t figured it out, this game is amazing, thus why I’ve spent the past several months playing it every Thursday (Phoenix’s, ok Mesa’s, League Night) and several other nights playing this game. It’s my most played game since it came to Phoenix, and I keep wanting more. I have yet to meet someone who did not enjoy this game, gamer and non gamer alike, so if you happen to live near one, or are visiting a place with one, go check it out. In a time when games are getting rid of couch multiplayer in favor of online only multiplayer, and arcades are a distant memory, it’s nice to see a new competitive arcade game that allows you to play with your friends, standing side by side, agaisnt 5 others.