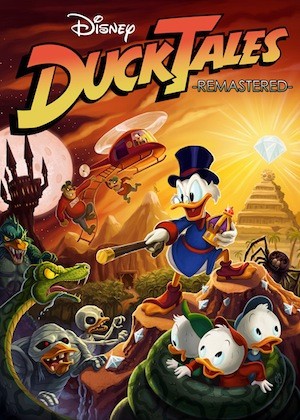 Time to Beat: about 5 hours but very replayable

When I first heard they were remaking the original DuckTales game 2 things came to mind.  #1 Curse Me Kilts! shut up and take my money! and #2 I cant wait to hear that awesome moon music again!

Graphics:  WayForward Technologies has done a fantastic job of updating the original NES game to the point where it feels like a full new game.  The animation is spot on with the cartoon show and look as if it was hand drawn by the Disney animators themselves.  Backgrounds are also fully animated and are a nice touch, give the game a 3d/2.5D feel (think Rayman Legends).
Sound:  Blathering Blatherskite! The sound effects are just as I remember. Now the transition from a 8bit NES cartridge to a full blown HD download does come with some changes, but I assure you they are all only for the best.   The music remains mostly untouched, only some added tweaks to fit in with the new HD feel of the game, but purists need not worry as there is an option to play the game with original music once you have beaten the game, hooray!  Also it is worth mentioning that Ducktales Remastered comes fully voiced by almost all of the original voice actors from the Cartoon, including Alan Young as Scrooge McDuck!  To me, this was fantastic, nothing made me happier than to hear all my favorite Disney Characters voiced just as they were back in the good ole days.

Gameplay:  Bless me Bagpipes! Most of the gameplay is completely kept intact with only a few minor fixes to enemies and Boss patterns.  Remember that DuckTales: Remastered, at its core,  is still a tough platformer from 1989 , so be prepared to question your gaming abilities or wonder how you beat this game as a kid.  Even still, nothing beats that wave of nostalgia you will have while playing, especially when you remember where a certain secret is. The only major changes to the game would be an actual focus on the story, mostly to help explain why Scrooge McDuck is traveling the world….or how he is able to breath on the moon.    Other changes include a few new intro and outro levels to set up the story better and the option to use your collected treasure to unlock art galleries from the game, rather than just being your “score”.

In all this is quite possibly the best HD remake I have ever encountered and loved every minuet of it.  If you are a fan of the Series or a fan of the old game you owe it to yourself (and probably your kids now) to give this one a go.  Shoot even if you aren’t that into the game you should buy it, just so maybe Disney will take a hint and release the rest of the Series on DVD!