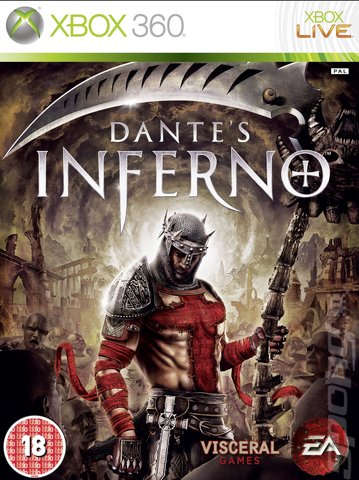 It seems like it was just yesterday that I was sitting in my World Literature class, during my senior year of high school, back in 2002 reading Dante’s Inferno.  One of a three part story called Dante’s Divine Comedy.  I never imagined back in the day that I would be storming the levels of hell, 1 thru 9, in search for my lost love Beatrice whom Lucifer had taken from me.  Actually, What I remember of the actual story is, I thought Dante was more of a Friar Tuck looking dude rather than a ripped European crusader.  But I guess you couldn’t have a Fat Friar Tuck dude slaying the demons of the underworld, and he definitely wouldn’t have a hot ass wife whom Lucifer wants. Well so you think…

So Krato’s Inferno, I mean Dante of War, shit I mean Dante’s Inferno over all was a interesting typical 10 hour button masher.  But let’s go back to the name confusion.  HOW the fuck did EA and Visceral Games not get sued up the ass by Sony and the makers of God of War, for the release of Dante’s Inferno.  Both of these games are mirror images of each other and I am not talking about the hours and hours of button mashing of relentless combos like XXXX, XXXY and LtYYYYYYYYYYYY I’m talking about the Level Design, Boss Battles, the Health and Mana Chests /Fountains or whatever they are.  The leveling of your character to unlock new moves and or spells, to the inventory screen was all 99.5% identical.  I really felt I was a Greek God of war storming the Catholic gates of hell.  But you could say, “but Booze, they have different weapons.” Whether it’s a big ass scythe or 2 short swords connected by a chain, it was the same fucking game, just a different story.

Enough about the similarities, the game was pretty bad ass.  Finally, getting to actually see an animated visualization of the 9 layers of hell was pretty freakin awesome.  It was not only awesome, but it was pretty accurate to the story, from the descriptions of the layers to the random characters you fight and meet in the game.  The creators of this game did there research.  It wasn’t just some made up bull shit that the creators just winged.  I never thought I would say that the levels of hell where beautiful, but they were very cool to look at throughout my journey into the depths of hell.

Besides talking about how awesome the game looked, you as the reader might be curious as to how the story is laid out through the game.  You star as the role of Dante, a sinful heroic crusader slaying Saladin’s armies of the Middle East, in search for control of the holy land.   Well, everything goes downhill when a hot piece of ass slave girl comes along and is looking for some action.  As you guessed it, Dante’s unfaithful ass goes in for a smoosh session and there you go, it’s just too bad that Dante’s hot slam dime piece wife made a deal with the devil saying that her husband would stay faithful on his crusade.  Dumb bitch!  Let’s be real here.  Thousands of miles and years down the line, Dante is going to have to release the tension, and since jerking his gerking is going to send him to hell, he might as well go for the real thing.  Soooo! Blah, blah, blah! Later, You end up getting shanked in the back by some Aladdin looking mother fucker and you are off to battle Death so you can jack the fools scythe eand head into hell to bitch slap Lucifer for jacking your woman.  Strangely you also have this red cloth cross sewed into your chest, and as you descend into deeper hell you get to see that it depicts all of Dante’s sins, and he must face every single one as he goes after that bastard Lucifer.  Also as you descend you also get to find out that Dante’s family is pretty fucked up, Dante is the son of a suicidal mother and a fat nasty rapist glutton of a father.

The biggest question I have for the game is, “WHAT IS WITH ALL THE MALE FRONTAL NUDITY?!?!”  I don’t know if they tried to make Lucifer large and in charge, but shit, down to his horsey knee caps was a little excessive.  I am not one to complain about nudity, as the boobs were awesome, but let’s calm down with the man junk.   I guarantee that the audience for this game was probably 95 percent male so there is no need for all that in my face.

Over all again, the game was awesome.  It had everything an A.D.D gamer like my self-needed, button mashing, awesome landscapes, blood, nudity, adult content, awesome story and a great soundtrack. Visceral Games did it again, that is two games played by them that I actually enjoyed it, it was no Dead Space 2 but it was totally worth it.  Visceral Games is totally moving up in my top games makers and will be looking forward for their next game.  So for 17 George Washington’s this game was totally worth it.  10 hours was a little short but to be honest I don’t think I could mashed more combos into the control for another 5 to 10 hours.  This definitely gets my bargain bin award!

PS Too be continued… My Ass!