While the B740A sits at the top of Bloody’s keyboard range, some of us don’t have $160 to spend on a mechanical keyboard with freaking lasers in every key. That’s where the B188 comes along, at a more modest price of $80.

What do you get for your $80? Well, you still get 8 light strike keys, which occupy the Q, W, E, R, A, S, D, and F keys (WASD + Q, E, R, & F), which are the most important keys to an FPS gamer. This gets you ultra fast response times (0.2ms) without any double bounce. We’ve covered the joys of light strike before, but for those new to it, it is Bloody’s name for having an infrared sensor to register the key stroke of the mechanical switch instead of a traditional metal contact. This has many benefits to it, such as being 18-30ms faster than other mechanical keys. It also doesn’t have any bouncing, and lasts longer due to dirt and dust not contaminating the metal contact. Plus, it’s lasers, and who doesn’t want lasers in their keyboard? 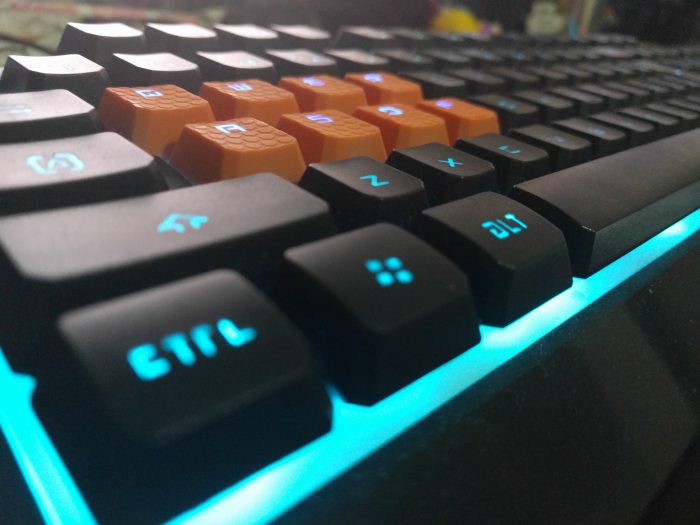 The keyboard also features ridges underneath the keys to protect the board should you happen to, gasp, spill anything on it. It also features a nifty drain hole so that any liquid (read Mountain Dew) that does make its way into the keyboard can drain out and not just soak the keyboard. Unlike the B740A though, the keys are not easily removable. It does give you a nice under glow to the keys though, which I find nice.

How does the B188 feel? To me, it feels a little spongy, whereas the more expensive B740A has a more spring like feel to it. On the other hand, this leads the B188 to be noticeably quieter than the B740A while still giving you that glorious mechanical sound. This is definitely a mid range keyboard, and you get what you pay for, and in that sense, this is definitely competitive for it’s price point, with the winner being the 8 light strike keys it has to offer.

Should you rush out an buy one? Well that depends on how much you are willing to spend. If money was no object, I’d go with the B740A, and not just between the two of these, over any other keyboard period. However, if you are looking for a decent mechanical keyboard for less than $100, then the B188 is worth consideration. If at all possible, I’d sample some mechanical keyboards before making a purchase, as they all seem to have a slightly different feel. My personal choice would be Bloody or Corsair, though Logitech makes a nice offering worthy of consideration.