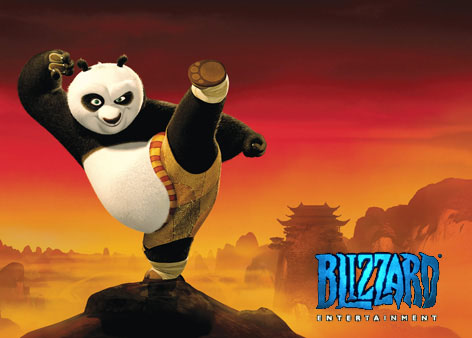 Ok, so that’s not the real mock up that Blizzard has for the characters, but that’s basically it.  Seriously, I think Blizzard is running out of ideas to add to their franchises.  The new expansion is called “Mists of Pandaria” and it features a new character class called… wait for it… Pandaren from, you guess it, Pandaria.  Oh, and did I tell you that they’re adding a new fighting class of Monk.  Seriously, if Dreamworks doesn’t sue the pants off of Blizzard from that alone, they certainly will from the screen shots of the magical world of Panderia.  Ok, I know I may be a little cynical about this because I don’t play WoW, but c’mon people!  What do you think?

If that wasn’t a big enough push for WoW users, Blizzard has also announced that Yearly subscribers to World of Warcraft will also receive a free copy of Diablo III when it launches.  Sounds to me that they are really pushing for people to stay in WoW and may be a sign of the beginning of the end for one of the best MMOs ever. Kotaku