Well…I finally beat the dang game, so why not write about my thoughts? Black Flag is the best Assassin’s Creed game in many ways, and much more the same in others. In Black Flag you actually play a Pirate, not an Assassin. You get thrown into the Templar/Assassin never ending battle in the hunt for loot, with allegiance to neither side. What would have been cool is if they allowed you to steer the story and choose which side you would ultimately fight for, but alas, the story is linear and you end up getting closer and closer to the Assassin’s, who unlike the Templar’s, aren’t trying to eradicate the Pirates. 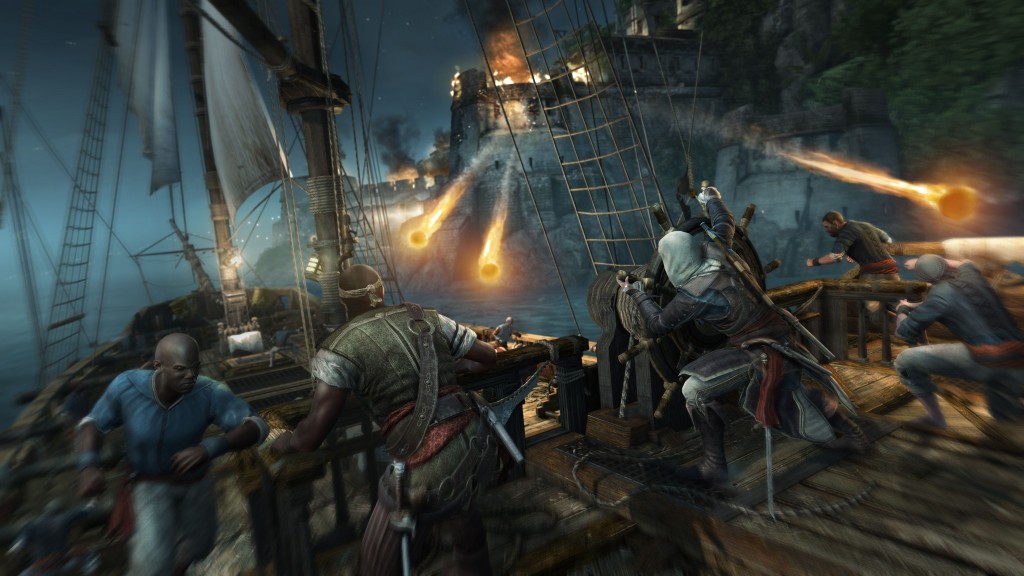 Graphics: The graphics are quite nice in this game. There’s something quite nice seeing the cannons roar as you fire a deadly broadside at your unlucky victim as the Jackdaw (your ship) charges through the waves of the storm that came out of nowhere. Then there are the thick jungles with plenty of foliage.

Gameplay: The world is massive, and the ability to go seamlessly from captaining the ship to swinging over to clear the deck of an enemy ship or head to land is amazing. This is what next-gen is about. The world is populated with ships to sink or capture, and forts to take over. Similar to other games like Far Cry or Infamous Second Son, taking over these forts that control different zones grants you benefits. You now know of local hot spots in the area, the location of a legendary ship (if you are brave enough to take up the challenge) as well as new missions. Not to mention that the fort will now fire upon enemy ships, which can be useful if you find yourself picking off more than you can chew. 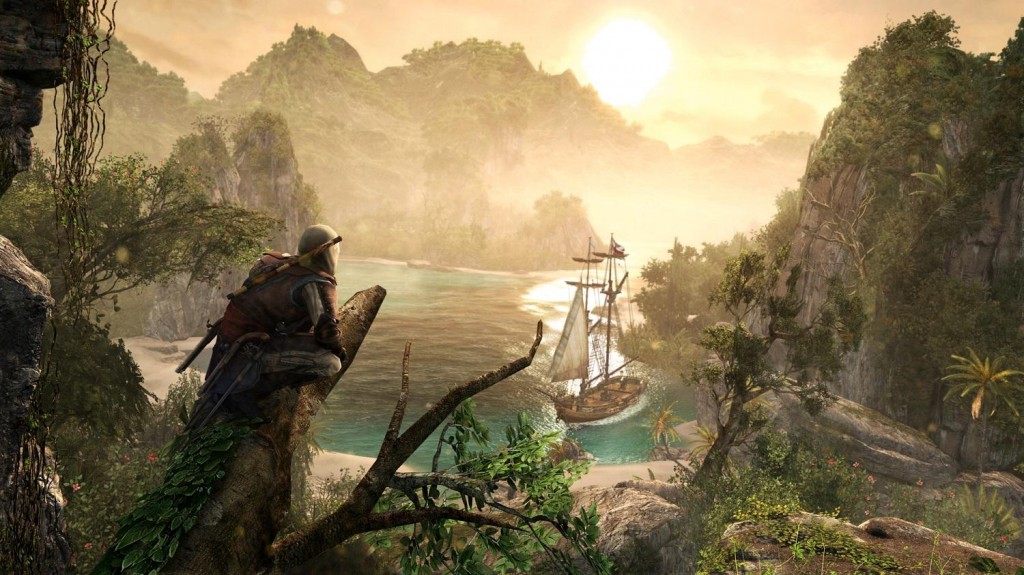 Naval combat is really sweet, and the highlight of this game. Really the only reason to get the game if you ask me. There’s nothing like chasing down prey and firing broadside after broadside into them as you expertly navigate your ship to avoid enemy fire. One thing I could have done without has mortars on ship. Seriously, it has no place on a warship. A) You have to have it placed just so to avoid hitting your own ship. B.) You are trying to hit a moving ship with a mortar while your ship moves and bounces around on waves. C.) The mortars would have to be placed on the top deck, and are extremely heavy. The heavy cannons are on the lowest gun decks for a reason. That much weight up high makes your ship rock even worse and hurts the ship handling. Basically by putting them on your ship you are putting yourself at a disadvantage. Ubisoft, don’t include them. I never put them on my ship because they are stupid. There are much better ways to add value. You know, you could add grape shot, other types of shot, carronades, crew enhancements that make them faster at reloading, shoot with higher accuracy, handle the ship better, even you know, swap out your ship for a new one. There’s ton of possibilities that make far more sense than putting mortars on ships. Ok, rant over. 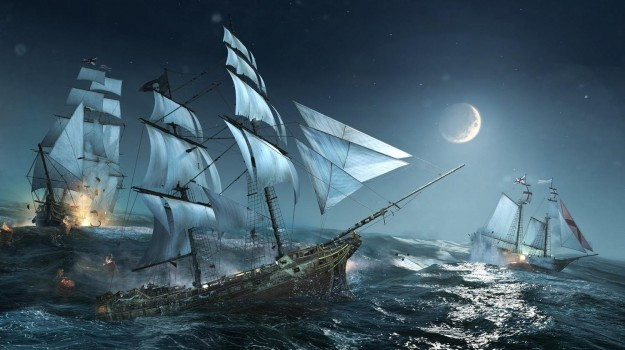 Fighting on foot, well, if you’ve played any other Assassin’s Creed game you know how this goes. Changes from ACIII is that the bow is gone in favor for a blow dart, allowing you to either put people to sleep or make them go berserk and attack each other. Pretty helpful for clearing out an area. You can also craft up pistol holders to carry up to 4, with the ability to quickly fire them off to clear out an area. Also, like any other entry into the title, expect a lot of follow missions, or as I call them, the bane of my existence. Maybe I suck, or maybe its the controls that aren’t as precise as they should be. I’ll go with the latter (but really its most likely the former, but its easier to blame Ubisoft for my short comings. Sorry Ubisoft). One of these follow missions (that was after another one, with, what, you guessed it another follow mission to follow) almost had me rage quitting, because if you didn’t take an exact route, and use the blowdarts to put 3 guards to sleep, you failed. This is why I love games like Metro: Last Light. I can stealth if I want to, and if I get “discovered” by jumping the wrong way (damn you controls!) then I had a fight on my hands, not mission failed.

Story: When you look over the story, its actually pretty good, but its execution leads something to be desired. I’d say its on par with other Assassin’s Creed games, and is actually fairly similar to Starz’s new original series Black Sails. A pirate thrown into an eternal conflict with his only mission to hunt the largest prize he’s ever captured, fighting to keep the pirate city of Nassau from the British, with loss of friends throughout and betrayal, not to mention a former love from a former life keeping him going. It has all the makings of a great story when you think about it, but while playing it you just don’t seem to care that much. Maybe it’s the 85 follow missions that numb you to any kind of progression, or the awesome naval gameplay that keeps you wanting to do that rather than the story. Ok, rant 3 over. 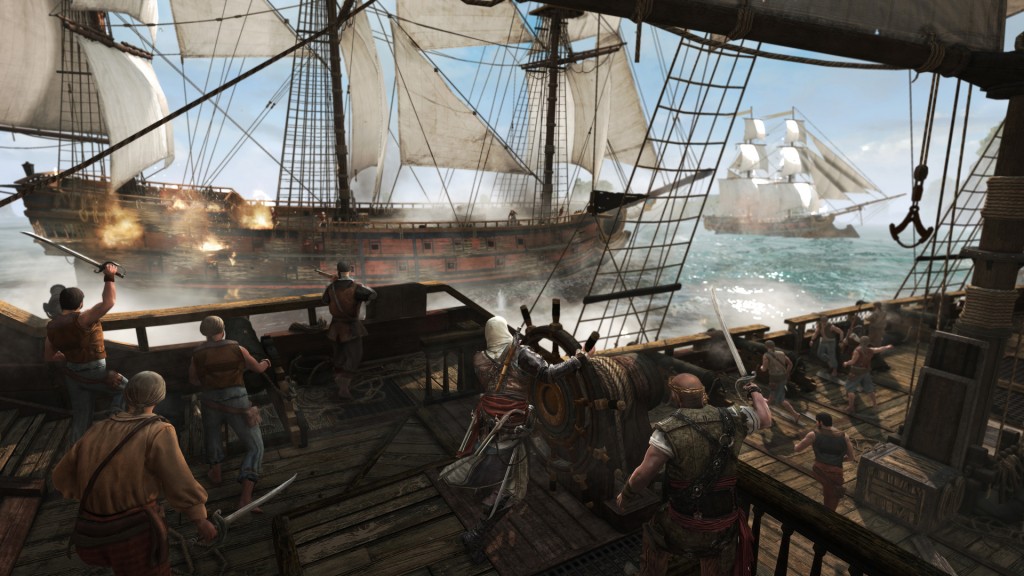 Final Thoughts: I’ll forgo the gripes, as you have already read through 3 rants, I say that about covers that. I must commend Ubisoft on the least buggy Assassin’s Creed title I’ve ever played. Now, that’s not to say there were no bugs, but they were few and far in between, and never broke gameplay as the way they did in ACIII. The active weather, naval combat, large seamless world are all huge huge wins for this title. Perhaps its playing two AC games in back to back years that’s got me feeling over done with this series. If you like AC games, pick this one up. If you want amazing naval combat and don’t care about beating the game, pick this one up. Otherwise, you might find it takes you entirely too long to get the game beat like myself. I’m a huge naval buff, so the naval combat alone makes this game worth the cost of entry to me, and I commend Ubisoft for making this type of game. Between this and BF4‘s use of naval combat have me very pleased on how naval combat gets added into games. No longer is it something tacked on, but a main focal point of a game. Here’s to hoping more follow suit, as I can’t wait to play an actual naval simulator game, perhaps a Star Citizen: 1720? That would be sweet. Well, maybe not the name, but you get the idea. Oh, and I BEAT IT…well…I BEAT IT FIRST out of us here at the website.