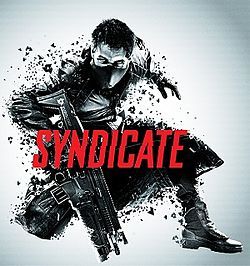 Super Sci-fi shooters are a dime a dozen and I had placed Syndicate firmly in the WFTBB list earlier this year anticipating another generic shooter.  However, I have fond memories of the original game so when I had a buy two get one free chance I took a gamble with Syndicate.

Gameplay:  The year is 2069 and major electronic uber-companies are now in a constant struggle to keep their technology on the leading edge, and by “struggle” I mean they be murdering each other.  Syndicate puts you in the place of a new super security Agent, or bio engineered killing machine.  What makes you a killing machine is the same technology you are fighting to protect, The DART chip system.  The DART system gives you a few interesting skills focusing on a “hacking” Stand point.  At any time you can temporarily enter a digital slow down view of the world which will show you enemy positions and assist with your aiming (think a “sci-fi” Bullet time).  Aside from the fancy bullet time there are also limited breaching/hacking skills you can use.  “Suicide” causes the enemy to kill themselves, duh, and take any nearby enemies with them if they use a grenade, “Persuade” where you hack someone to fight on your side  for a short while before killing themselves, and “Backfire” a hack to the enemies weapon to cause it to backfire on them and stun them for a short while.  Also, if available, you can hack computerized enemies to fight for you or lower their shields.  All of the abilities, except for the basic hack, use adrenalin for power and you gain adrenalin by killing enemies, thus limiting what abilities you have available at any time.

Graphics:  The game is very slick and pretty.  Think Mirrors Edge mixed with a bit of Blade Runner.  The facial animations are pretty good and some of the environments are very well rendered however the enemies look super generic and some of the bosses just blend in with everybody else.  Also look out for that light bloom effect, sometimes the blooming would be so extreme it was hard to see or find your way.

Sound: Guns sound like guns and the voice acting is done well enough nothing over the top however.  Nothing too over the top with music but boss battles will flood you with Dub Step.

Skills:  While you play through the Syndicate you get a few choice opportunities to “upgrade’ your Dart chips functions.  This is done by “extracting” another Dart Chip out of a enemy’s brain (usually boss).  You really need to choose your skills wisely as there is no way you will be able to get fully upgraded.

Final Thoughts:  The entire time I was playing this game I couldn’t help but think about DeusEx as it follows almost the same style (only better).  Also Syndicate is VERY short, there are 20 missions and each missions takes between 10 and 20 minuets to complete, but not including the multiplayer.  The multiplayer is well done its squad based with short missions to work through and could be fun if Xbox Live wasn’t full of idiots, but I can see the draw if you and 3 friends were to work together.  Aside from it being the generic Sci-Fi shooter I thought it would be the only real gripe I had with the game was grenades.  Instead of just having a button throw a grenade (like every other shooter out there) you have to hold the weapon swap button to equip the grenade and then you can throw it, its not that big of a deal, but I found it cumbersome and therefore did not use grenades that often.  All in all if you are Dying for a new mindless shooter Syndicate could be right up your alley but if you want a good shooter set in uber sleek future play Deus Ex instead.