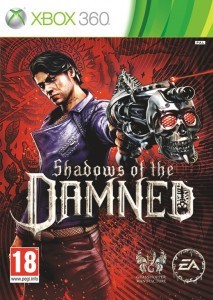 Shadows of the Damned

I am GARCIA FUCKING HOTSPUR, slayer of demons! Where do I start, this game has to be my dark horse game of the year.  If there was a playoff system for videogames in the year 2011, this would have met BattleField 3 in the Super Bowl and lost in overtime by a two point conversion.  Shadows of the Damned had EVERYTHING I love and want in a videogame.  A great set up to the story and a great finish; I am expecting a number sequel within a year.  The music score was so awesome; I even liked the music in the loading screens.  The graphics were stained in the color crimson with all the blood in the game, and randomly the game would go into this 2D side scroller, where everything looked like it was made out of paper mache.   The humor in the game let me connect with the characters, also I knew who I was and knew what the hell I was doing. 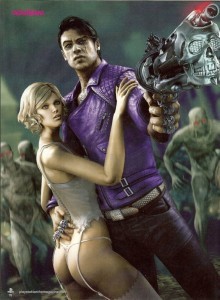 I think I finally found a new character that could actually go toe to toe with, John Marston, when it came to be a bad ass.  I really don’t know who would win in a fight but if they made a child the world would just implode from the massive amounts of bad ass!  Fleming the Lord of the Demons picked the wrong dude/demon hunter to fuck with.  I mean he wanted his hot piece of ass wife Paula to be his mistress in the underworld, but damn dude wrong guy to fuck with.  So Garcia Hotspur chases after his wife’s murderer/kidnapper, Freeman, into the demon underworld for some big time payback.  So you start at the gates of the underworld with a demon homie named Johnson and yes there are wiener references later in the game.  The object is you make your way through the light and the darkness to Fleming’s castle to rescue your scantly clothed woman Paula.  Along the way you find these massive books, which Johnson reads to you like story time explaining the history behind the next demon you will be fighting, this might sound stupid but they were all actually pretty humorous.  Also along the way you try to find white, red and blue diamonds each representing something different.  The White diamonds are the monetary system in the underworld, the red diamonds are what you use to upgrade your weapons and health in the game and the blue diamonds are given to you at the end of each boss battle that that you can receive more powerful weapons.  The boss battles throughout the game are pretty fucking epic, maybe a little too easy but the epic-ness saves them.  The other plus is they are always different, Each boss character has a different weak spot that usually takes a few minutes to figure out.  The one thing that constantly made me laugh throughout the story was Garcia’s accent.  If you didn’t take from the name Garcia, he is Hispanic.  Throughout the game he calls his girlfriend Paula Angel, but because of his accent Garcia always sounds like he is referring to her as Anal.  Call me a child but it made me chuckle every time. 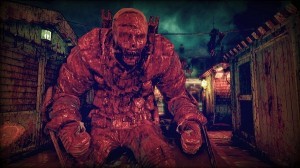 Besides the awesome story, the extremely gory graphics and grindhouse themed music was perfect for the game.  The artist for the game did an amazing job painting such a dark and sinister world. The character designs were also awesome, and if you like bloody games this one should hit you expectations, there is blood coming out of everything and when you get hit enough there is blood on your screen.  There’re characters that look like they have bathed in blood and then dumped a bucket of blood on top of them after. On top of the graphics the music score also made the game, it wasn’t too dark but it wasn’t awkward during the game; it was perfect.  I was actually bummed out that no one on the android market app Zedge has uploaded any sounds or music from the game, because I actually checked it by the 4th hour in playing.  Repeating what I said in the first paragraph there are a couple 2D parts where your character looks like he is made out of paper mache.  All this did was change it up from being so repetitive.  Another thing that I thought was awesome was there is a chapter in the game called “As Evil As Dead”, and in the chapter your character Garcia runs to an empty cabin in the woods that is Identical to the cabin in Evil Dead.  There is even a rotting carcass trying to escape from the basement to come and get you.  Good god I am pussy whipped for this game more than my girlfriend. 😉 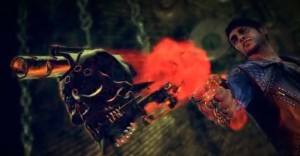 I know I have already verbally bitched about how I don’t like where EA is going with games because of the registering so you can play online, I still think it’s fucking retarded however, this game was awesome!  In a year where I was completely disappointed with the summer release titles compared to 2010, this game did it for me.  I am not going to say any names but I remember a publisher/ editor in chief saying wait for the bargain bin when I brought it up to him.  I laugh at that 12 year old now, and that is why it was the dark horse for 2011. I Beat it First!!

6 thoughts on “Shadows of the Damned Review”