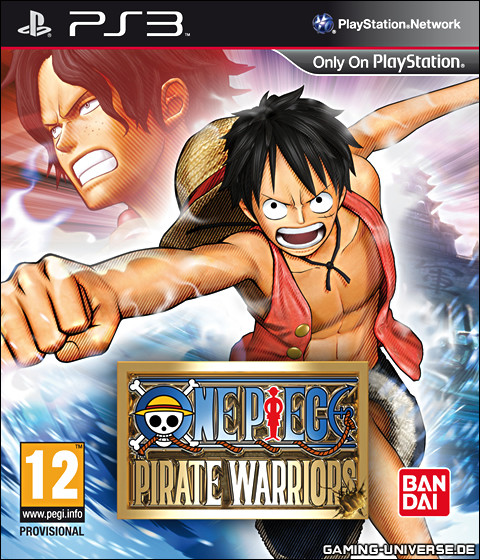 HEY KIDS!!!  Do you like Dynasty Warriors?  Do you like One Piece?  Do you like games that give you just enough story to know what’s going on but still doesn’t do the manga/anime justice?  Well have I got the game for you!

I’ll start out right off the bat; the story in this game follows the timeline of the manga but cuts out quite a few key points.  People new to the series will get just enough information to know who some of the people are and some of their motivations, but people like me will know quite a large chunk is missing.  I attribute the story reduction to it being a first installment to the series, but given how much ground they covered I don’t think they will be revisiting the early parts of the story any time soon.

If you’ve never watched One Piece, here is a quick synopsis: you play primarily as Monkey D Luffy, Captain of The Strawhat Pirates, on his quest to find One Piece and be named the Pirate King.  Luffy has swallowed the Gum Gum Devil Fruit and has turned in to a Rubber Man; this allows hime to stretch his body to great lengths and makes him virtually unstoppable.  There are many Devil Fruit throughout the One Piece universe, controlled for both good and evil (depending on which side of the line you’re standing on), ranging from physical traits (creating knifes from limbs, changing to a cheetah, growing wings, etc.) and metaphysical, called Logia, that allow things to be free flowing (smoke, light, fire, sand, etc.).  If you thought the specials skills of Dynasty Warriors were nuts, these Devil Fruit powers make them look like Mario jumping on a Goomba.  The Strawhat’s are a small crew, currently consisting of 9 members, but they are 1 of thousands of pirate crews in the world (and definitely the smallest).  Luffy is the son of Dragon, an infamous rebel leader who is also the son of Marine Vice Admiral Monkey D Garp, and has an adopted brother name Portgas D Ace who is the son of Gol D Roger, the executed collector of One Piece and former King of the Pirates.  Since this story is from the Pirates perspective naturally the Marines are the “bad guys” You play through many of the key story components of Luffy adding to his crew, all the way up the Marine/Pirate War that caused the anime to jump 2 years.  Given all of the time that this game covers, 597 issues of Manga, you get to see Luffy and his crew progress from plucky upstarts to being top of the Marines hit-list and all of their “leveling up” along the way (I say leveling up because that’s the best way I can describe their progression).  You meet the crew when they’re already good at what they do and then watch them get better and better.

You might be thinking “It’s just Dynasty Warriors with a new skin”, but you would be dead wrong.  Only 4 of the crew members actually use weapons, one of them using 3 swords at once, so the combat can be vastly different and much faster; where as in most Dynasty Warriors games it’s a feat to hit 1000 KO’s, you will routinely hit this number in Pirate Warriors.  The game does have a leveling system, based off of EXP, but I like that they do not allow a character to have particular skills until you have completed the proper portion of the main story.  This progression allows for a better tie in to the main story and keeps players moving forward rather than playing all of the side missions.  I was not a fan of all of the quick-time button pressing sequences however.  I can do with the sequences at the end of a big battle, to help make it seem like the hero landed a great finishing blow on a boss rather than just depleting the enemies HP to 0, but when you have to do long button sequences just to progress through a level it just pisses me off.  Putting sequences in to the main portion of the story screws with the continuity and flow of the game and should NEVER be done.

There isn’t a whole lot to be said about this section, I wasn’t thoroughly blown away but I wasn’t disappointed either.  The levels weren’t super large but their detail was on par with what you would find in the anime.  There was some enemy popup but it usually was when there were more than 150 people on the screen at one time (I’ll let that slide a little since this is a PS3 game) and wasn’t very noticeable.

This is an area where I have some mixed emotions.  Gone are the heavy metal riffs of a traditional Dynasty Warriors game, replaced instead by music more akin to the One Piece series, and I must admit I was happy about that.  The dialogue, on the other hand, is a mixed bag of emotions; it’s all in Japanese.  Normally this wouldn’t be a problem, especially since they used the real voice actors for the characters and the Japanese voices match the characters better than the English, but they give all of the in battle commands and distress alerts in Japanese also.  Sure they have subtitles in English, but that trick only works well in RPG’s.  In a fast paced beat ’em up game you don’t always have time to look at the bottom of the screen and read what they’re shouting at you. 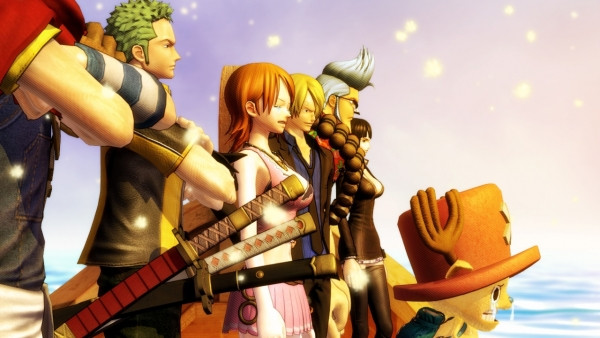 All in all it’s a pretty good game and a good launching point for people new to the series.  The quick-time sequences and the in battle dialogue may cause hindrances, but all in all it’s not enough to stop the fun.

One thought on “Review: One Piece Pirate Warriors”