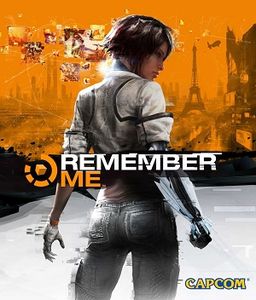 Time to beat: About 15 hours

Picked up Remember Me as a “hey I remember thinking this game looked cool” (and then laughed at my own pun)  I jumped into Remember Me with low to no expectations.  The game that followed will most likely stick with me forever.

Story: Remember Me is your typical dystopian future story.  An ultra advanced society places too much trust in a major cooperation and ends up becoming oppressed and controlled.  The uber company Memorize has invented a way for humans to share, store and remove their memories. Turning a person into a walking bank of information or helping humans forget hard parts of their lives and turn them into thoughtless zombies.  Memorize with all this information has found a way to control the populous and only a small group of freedom fighters, called “Errorists”, fight to take down Memorize and fight for the peoples freedom.  Think, Blade Runner and Matrix with a little Tron and Inception tossed in the mix.

Graphics:  Graphically the game is quite impressive.  Nilin (the main character) looks the part and her physical appearance fits the scene appropriately, with sweaty clothes or messed up hair as she progresses.  Some of the art in the game is top notch, especially if you are a fan of Blade Runner, and the uber-stylization really fits in.  I also loved the use of the Augmented Reality, showing you where to go, what to avoid and even keeping you locked in certain areas, I know its nothing new as far as gameplay goes but it was nice to have it “explained” and added an interesting 3rd dimension feel.  I also enjoyed how the screen would get all “glitchy” looking when you were low on health instead of the traditional red “low health” borders.

Gameplay:   There are 4 types of attack types in Remember Me,  a basic, healing, cool-down and a chain attack.  The basic and healing attacks do just as they sound where the cool-down attack quickens the cool-down rate of your special abilities and the chain attack will chain (duh) whatever attack you did before it and increase its effectiveness.  The combo system allows you to change how each of your combos work to make the most effective fighting strategy to your style of game play.  You can even change on the fly too so if you start getting your ass kicked you can switch it over to all healing until you get back on your feat. combos build as you make successful hits and time the next “attack”.  Here is where the game starts to fall apart, rather than just pull off the combo like a fighter or other brawler type game you can only hit the next button in a combo once the first attack connects, it makes sense and its easy to monitor, but it makes the game slow way down and it feels like you are playing a very slow game of Simon rather than a brawler.  Outside fighting you will spend most of your time doing basic platforming and Remixing peoples memories.  Remixing memories is an interesting “inception” style plot twist allowing you to change the memories of certain key people.  While remixing you will watch a scene play out and you will then have to go back and make slight changes to the scene to make a the person remember something different, ie forget why they are attacking you.  Unfortunately these scenes can be a bit slow and are mostly just trial and error but it is a fantastic plot device.

Sound:  While the voice acting is all well and good the star of the sound goes to the stellar sound track.  Composed by Olivier Deriviere Remember Me has one of the most epic, remember-able sound tracks I have ever heard in a game.  Now obviously its got a sci-fy vibe to it but the way the music changes with fight scenes, or certain situations really impacted the game.

Gripes:  This is a single play-through game, even on Hard there isn’t much of a reason to play again, and aside from some frustrating parts its fairly easy.

Remember Me has some of the longest load times after death I have experienced this year.

While the combo types are customizable the actual combo is not, meaning you can make a X,X,X combo be all healing but you cant change the combo to be X,Y,X (unless you pay).  While I’m talking about combos there are only 5 in the game making the game kinda repetitive at times, also the only DLC for the game is extra combos!  Like, who would need to purchase extra combos? just to see Nilin dance around differently?  It just felt like a cheap way to get more money out of the game./Gripes

Remember Me is a fantastic linear story well worth a solid rent or bargain bin pick up, especially if you are suffering a GTA hang over and want to play something with a little more thought and pretty lights behind it.