It’s time for the unboxing of September’s NerdBlock: Sci-Fi Block! You know what this means: a ton of great loot! This month featured items from the X-Files, Star Wars, Star Trek, Starship Troopers, Doctor Who, and artist Tom Kennedy. 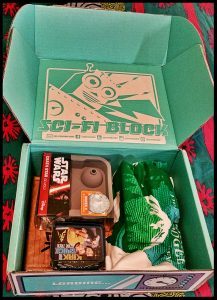 X-Files T-Shirt: Lake Okobogee
Every Sci-Fi Block comes with a t-shirt, and this month’s was no disappointment. It features an advertisement for Lake Okobogee from the episode of the X-Files titled “Conduit” in which Mulder and Scully investigate a potential alien abduction. Subtle fandom shirts like this one are always going to be a happy addition to my nerdy shirt collection. 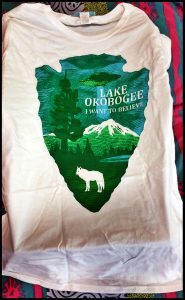 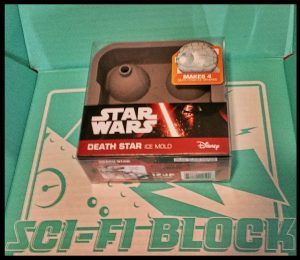 Star Trek 50th Anniversary Mini Lunchbox
This item lets me finally realize my dream of having a Star Trek lunchbox without having a full-size metal box take up space. This mini lunchbox celebrating the franchise’s 50th anniversary is just over 3 inches wide, so it is perfect to display on my desk next to my Spock figurine. 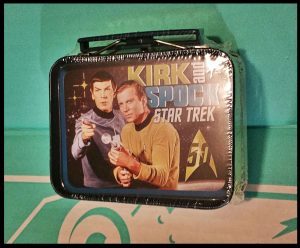 Starship Troopers Temporary Tattoo and Patch
One of the smaller items from this month’s crate, this temporary tattoo and iron-on patch are from Starship Troopers. I can’t say I’m the biggest fan, but the original movie was pretty entertaining. I can see these being useful for one of my cosplayer friends, though. Anyone up for a trooper cosplay? 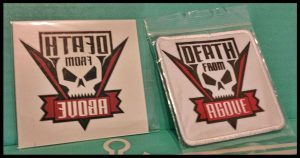 X-Files Insulated Lunch Bag
This is–by far–my favorite item from this month’s crate: an X-Files evidence bag that doubles as an insulated lunch bag! It’s big enough to hold all your lunch goodies while also letting your believer flag fly (it is Mulder’s, after all). 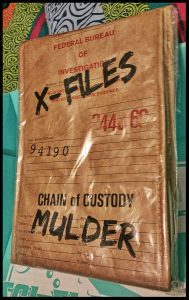 Dr. Who Comic: The Third Doctor
It seems that as the Third Doctor’s popularity resurges among the newer members of the Dr. Who fandom (myself included), that more Third Doctor-themed items will be released, such as this exclusive comic which includes all-new stories featuring the doctor’s companion, Jo Grant. 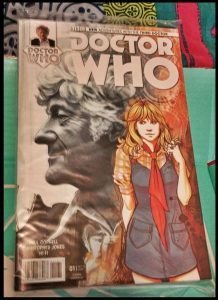 Art Print by Tom Kennedy, “Space Girls”
Last, and certainly not least, is my close second favorite item from this month’s haul. Titled “Space Girls,” it features Ellen Ripley from Alien, Jane Fonda’s character from Barbarella, Uhura from Star Trek, Leeloo Dallas from The Fifth Element, and Leia from Star Wars. Needless to say, this is already up on my wall with a frame forthcoming. 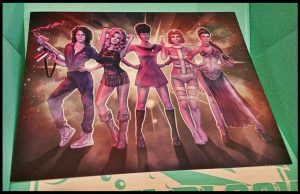 This crate gets a solid 4 out of 5 on my rating scale of nerdy sci-fi awesomeness. See you next month which will feature an exclusive item from Jurassic Park!