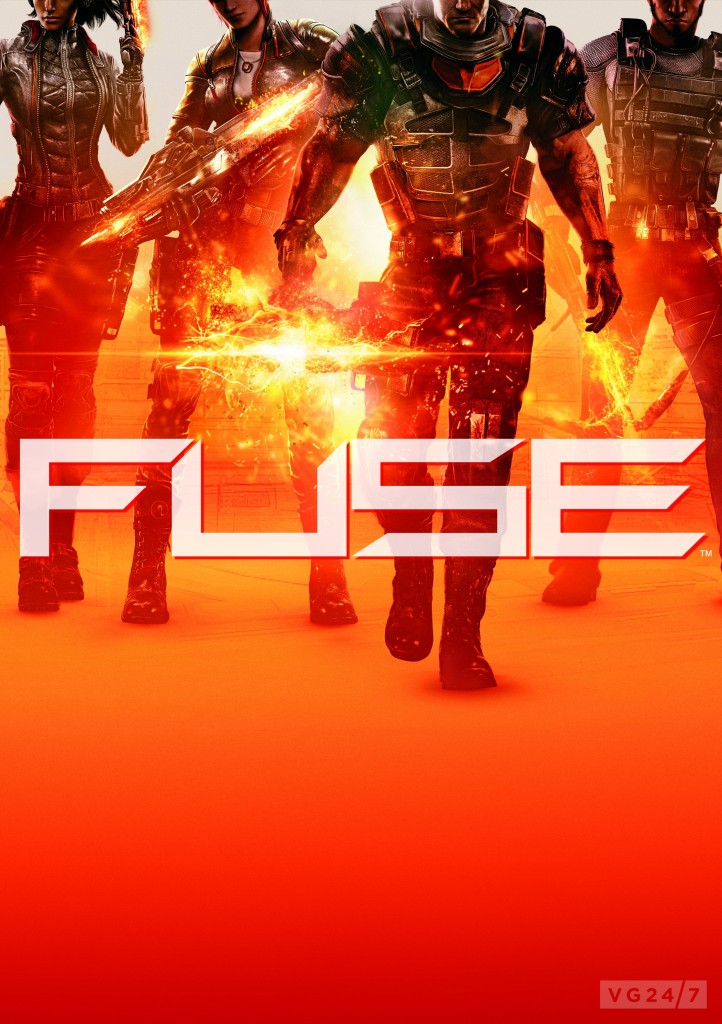 Have you ever wanted to play a game where you start off with the super over powered gun and your job is to just mindlessly shoot everything in sight? Well Fuse is right up you alley.

Fuse or “Generic Sci-fi shooter 2000” revolves around a special ops team, called Overstrike 9, a 4 man gender/race diverse team who finds a new secret energy source called Fuse. Fuse, while a fantastic energy source, is a far better weapon and the 4 Fuse guns used throughout the game allow you to murder millions of people in quite fantastic fashion.  At its core Fuse is a 4 person squad shooter with each of the 4 players taking on a certain role/gun. Even playing alone all 4 squad members will be present and available for you to switch to on the fly.  Just remember that when you pick a character to play you can only use their specific gun.

Story: The story is cognitive and is enough to move the game forward, but lets be honest, world domination and super weapons have been played out a billion times before. I will say however that some of the banter between team mates did make me chuckle once or twice.

Graphics: I could pull an image from almost any other Sci-Fi shooter out there and you would have no idea. Even though its generic, it does not make it bad, the location are crisp and varied enough to not make it feel too repetitive, also the face work on the main characters is actually pretty well done. Fun Fact: There are only like 8 actual human faces in the game (including your squad), the 1000000 people you kill in game all have generic “PMC” suits on so don’t expect to see a lot of variation in your enemies.

Gameplay: SHOOT, SHOOT, SHOOT, SHOOT, walk forward, SHOOT SHOOT SHOOT SHOOT, walk forward. There isn’t much more that needs to be said. If you are looking to shoot, this is the game for you, and it can be quite fun.  If you are wanting to do anything besides shoot everything then this is not the game for you. In all honesty I feel Fuse should have been released as an arcade title as the game isn’t very long and your “score” or XP, carries over with your profile as you level up your characters.   I will say that if I had 3 friends who were all playing this game with me at the same time I may have had a little more fun with the game, as that is its intention but solo play or playing with strangers gets old quick.

Sound: The music is generic and repetitive, but don’t worry you wont be able to hear it over the constant gun blasting you and your squad mates will be doing, especially with the Warp gun. The Warp gun has the ability to create a black hole that pulls enemies in once weakened, awesome right? Well, expect to kill every single enemy with a loud WHAUMP noise, oh and the black hole can chain (for reasons) so between the constant firing of the guns, all the explosions and black holes don’t expect to hear anything besides pandemonium.

Gripes: Playing alone means playing with horrible AI. Don’t get me wrong the AI understands who and where to shoot but I had more than a few cheap deaths because the AI was more concerned with getting to the next objective than reviving me. Clipping and other glitches were kinda rampant, even to the point where I had to restart a mission due to being stuck in a glitched section.

Lastly, if you are looking for an easy stress killer and just want to blast some bad guys with your buds this game fits the line perfectly, however playing any amount of money over $10 bucks may not be worth the cost.