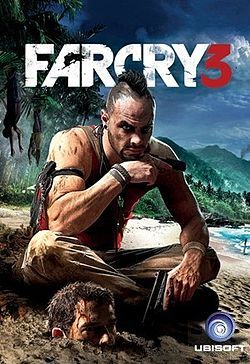 When I first saw Far Cry 3 my first thoughts were, “boy, that’s a purdy lookin game” “but I bet its just another brainless shooter full of douche bags”.  However, despite my early feelings for the game, and my hate of Far Cry 1 and 2, it did look beautiful so I decided to pick it up.  Turns out I was completely wrong…mostly.

Let me just start off by saying Far Cry 3 is by far one of the most beautiful games I have seen recently.  Now a lot of it has to do with the tropical island setting(my personal favorite video game setting) but I’m not lying when I say Ubisoft pulled out all the stops to make this a well crafted game with fantastic style, story and gameplay.  (No wonder Assassins Creed 3 sucks, they were all working on Far Cry 3).

Story:  Far Cry 3 throws you in the Shoes of Jason Brody who is vacationing in Thailand with his douche bag friends who end up being kidnapped and held for ransom by pirates (the phrase “Heres to my Dads black card and my Black card” is said more than once, douches).  Jason, is lucky enough to escape and must now fight hoards of pirates and mercenaries to rescue his friends and family.  The entire story is basically a coming of age story of Jason turning from a typical popped collar dick in to a crazy spiritual warrior and/or hero.  I will also add that Far Cry 3 has one of the most sadistically crazy bad-ass villains I’ve  seen in a FPS, quite a rare thing, if you think about it, to really hate the bad guy in a shooter.

Gameplay:  Here is where Far Cry 3 stands out compared to most shooters.  You are  just some guy running scared, with nothing but your wits to get you by and must use the land to make due.  You harvest certain plants to heal or modify your senses ie hunting or combat effects.  You must hunt to craft yourself holsters, ammo pouches and backpacks so you can carry more guns, ammo, curatives and stuff.  For me it was the first time in a game where you really felt alone and that you had to start from scratch.  Finding plants is easy enough, but hunting, at first, is as much a challenge as some human enemies.  With limited ammo and a peashooter of a gun, taking down a kimono dragon or a charging goat isn’t as easy as it sounds and will result in some frustrating deaths, especially when you run into tigers (fucking tigers).

While I’m talking about hunting its worth recommending to do it as soon as possible, so if you see an animal kill it and skin it,  Every animal is used crafting something at least once and at most 4 times.  So if you are not a fan of chasing down helpless virtual piggies do it quick and get it over with as you are going to want have more guns and ammo, especially ammo.  Aside from the minimalist start to the game, most of your time is filled with climbing radio towers (think vantage points in Assassins Creed) and taking over small bases.  The bases work as fast travel points and each one offers side quests.  Base take overs are quite possibly my favorite “side quest” as each base has its own set of challenges and enemies to over come.  Especially since you get bonuses for taking over a base stealthy.  Outside of these small side quests the story is fairly linear but the time/how you handle each scenario is completely up to you.  If you like the stealth approach, the knife take downs are some of the most satisfying kills in the game and allow you to really feel like more of a bad ass.   Nothing like stabbing a guy in his heart, grabbing his gun, shooting all his friends nearby and dropping the gun all dramatic like.  However if you prefer to shoot first and ask questions later there are plenty and I mean plenty of guns for you to choose from.  Each gun has a wide range of add-ons you can purchase like scopes, extra mags and silencers, shoot you can even paint your guns if you want.  This extra customization really allows you to play the game how you want to, and I want to applaud Ubisoft for taking that extra step.

Graphics:  Did I mention this game is gorgeous?  Well it is and the character models are amazing to boot.  Granted there are some hiccups here and there and some non-story NPCs are ugly as hell, but everything else is very detailed, even being mauled by a tiger is amazing or pulling a thorn out of your arm when you heal yourself is great.  The extra stuff in the world is what makes you feel emerged, like seeing your foot when trying to climb a ledge or looking at your arms when hang gliding small things that make you feel like you are Jason….well I am Jason, but help you feel like Jason.

Sound: The voice acting is spot on, so spot on that there were multiple times where I was like “Man, Jason Brody does not sound like the type of person that would do all these things.”  But then I realized, thats right, hes not an “action star” hes just some kid fighting for his life.  All other major characters are well acted and voiced as well, from the jungle princess all the way down to your stoner friend.  The music was a mix between jungle beats with creepy ambiance to dubstep with Skrillex, yes you read that right. However, burning  a field of marijuana with a flame thrower while Make It Bum Dem played seemed oddly fitting.  Regardless the music was fitting most of the time although sometimes a bit too dramatic, especially when you are just playing poker.

In the end I really enjoyed my time in Far Cry 3 for the new play aspects it brought to First Person Shooters and would recommend it to anybody, just remember that I Beat It First.

2 thoughts on “Far Cry 3 Review. Not for PETA members”