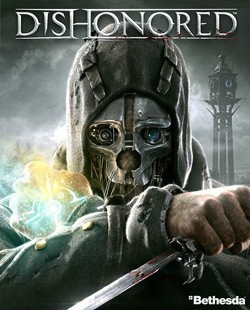 Dishonored was actually placed on the WFTBB list mostly for its short and limited game play.  Well as with most WFTBB games I was able to borrow the game (from a friend who decided not to heed my advice) and gave it a solid play through , stealthy, of course.  What I found was a interesting, full world….crammed into the space of a 2nd rate FPS.

Dishonored story starts off well enough.  You play as Corvo the empresses right hand man and faithful killing machine.  You have been on a voyage talking to other kingdoms in search for aid in fighting a new rat plague that has infested your fair city.  However upon your return you are immediately framed for the murder of the Empress and are imprisoned.   Upon being ‘Dishonored’ the fate of the city is now in your hands to take revenge against those who have betrayed you, rescue the princess, and return order to a dying city.  Along the way you run into some “God” like person who decides to give you magical abilities for some reason and off you go!

Story: I’m sure you are not the only one who has noticed that this is not a very original story line, however, if its played out and it works, then why not.  The world of Dishonored is full of colorful people, even if they only say maybe 3 or 4 different things at a time, but it is still interesting and fun to explore world. However all of this can easily be skipped, I guess if you are just looking for a quick kill game that’s all well and good but Bethesda built a huge world why not explore it.  Another Bethesda standard; books, could be found all over the the place as well. These books were mostly just filler or “lore” to help you get immersed into the world, but in a 10-15 hour game its hard to justify reading books about a game you will be leaving behind so quickly.  In Skyrim, books were great, they gave you insight to this huge open world or even gave clues to treasure locations.  In Dishonored, book just mostly talk about the whaling economy and how they use whale blubber for power or you might finds a book of sea shanties….who cares.

Game Play:  The game plays fairly well but there is just one MAJOR warning I would give to all of you major Thief/Deus Ex/MGS or any other stealthy game fans…. Dishonored was made with stealth as a secondary option.  Now before you go an grab your pitchforks hear me out.   In the three other games I just mentioned each of them has an extensive load-out of both lethal and non-lethal gadgets you can use to take on the world however you want.  Dishonored on the other hand only gives you two non-lethal take down methods:  A 10 shot sleep dart and the choke hold…Ill talk more about this later.  Now granted Dishonored does give you plenty of path options to take mostly a rafter, front door, or rat hole but it does give you a sense of freedom.  Aside from the stealthy limitations the controls were tight and moving around was easy enough I only had a few problems where I would block instead of choke someone (as its the same button) and teleporting onto a level just above your head can be a pain to line up.

Graphics:  The biggest draw to this game was the “steam punk” style all the trailers and artwork showed really drew me in, that this game might really have a different style to it.  Unfortunately upon playing the game I was less impressed, The character faces are just horribly, and I mean Horribly ugly.  Also, as far as I’m concerned, the style of giving characters big hands and feet (think Fable 2) can just die it just looks absolutely dumb, especially for such a “mature” game.  Given that, the game does have its own artistic style, taking a moment and looking around it really does look like a painting, and buildings can sometimes be very detailed in showing the downfall of what was once a great city.  Unfortunately 90% of the time you will be using the “Dark Vision” ability so you can see your enemies through walls, much like Batman’s Detective Mode, and it just turns everything black and yellow.

In closing I enjoyed my time with Dishonored, but I am very glad I did not pay full price (or anything for that matter), its a good game with a lot of potential and a good twist at the end, I just feel that they left a lot to be desired and for a huge, known developer such as Bethesda it didn’t feel fleshed out.  At least I can say this was the first Bethesda game I’ve played in a long time that didn’t swarm with glitches and errors haha.