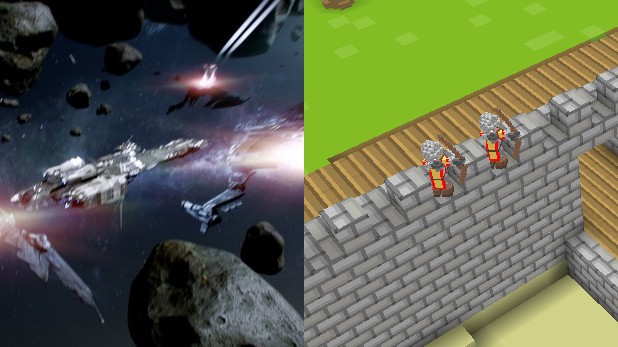 Crowd funding websites like Kickstarter are a great way for a game to get funded, especially with publishers liking to play it safe, and stick with sequels. It allows gamers to have a voice, putting their dollars directly into the development of the games they want to play.  Industry vets and up and coming indies have utilized this to their advantage, but with so many taking advantage of this resource, it can be a daunting task to find what games that you want to throw your money at. This is why I decided to put this task on myself, and find where a mere $15-30 can get you a copy of a great game, and in some cases, beta access as well.

First up is Timber and Stone, which uses the same voxel look of Minecraft, but instead of simply making a Minecraft clone, it applies the mining, foraging, crafting, building, and survival elements in an RTS form. Timber and Stone gives you access to many different units that you must equip, and then go on collecting resources so you can build farms, houses, walls and siege engines. Goblins and other raiders will want to kill you and take what you have, so defense is key. If you are a fan of Minecraft and strategy games, then send this guy your money! It’s only $15 for a copy of the full version once it’s release, and $30 gets you access to the beta. The Kickstarter ends October 26th, so you better hurry! You can check it out here.

The second game I want to talk about is a space sim by the name of Star Citizen. It is being made by the guy who made Wing Commander. Star Citizen is an ambitious space sim project that looks to push PC gaming to its limits, beyond what is even possible on console hardware. In Star Citizen, you can go explore the universe and get involved in trade or pirating, or join up with the Star Fleet for a tour of duty. The economy in Star Fleet is all player driven, so if a bunch of players start selling iron in one place, then the price will drop. You can also recruit your friends in to help you with a fight, or if you have a big enough ship, have them man a turret. This game has got me excited, and with the massive scale and level of detail (up to 10x that of current AAA games), it shows us what the next generation holds. Head over to it’s website or Kickstarter for more information, and reserve your copy for $30.

So what are you waiting for? For as low as $45, the price of a bar tab, and $15 cheaper than any console game and most PC games, you get a great looking indie game and a fantastic looking AAA open world space sim.