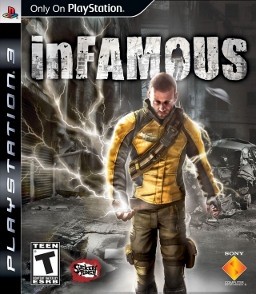 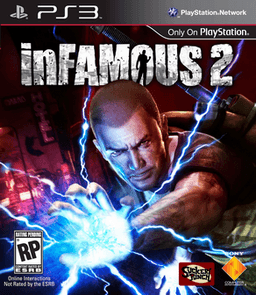 The inFAMOUS series was probably top on my list to destroy during the SoJ as it is taking up a ton of space on my HDD (about 22GB total) and every time I go to my games they just sit there and stare at me.  It took a little longer than anticipated but Ill tell you what, inFAMOUS, is done!

In the Summer of Jason I am not going to follow the typical I Beat It First guidelines of reviews as the point of SoJ is to pound through games and get rid of my backlog before the Gaming season starts up again.  For those of you who do not know or are only Xbox owners inFAMOUS is a 2 game series following Cole, a courier/delivery boy turned super hero.  Cole’s super powers are anything involving electricity and the powers easily steal the show.   In the inFAMOUS series  it is your job to decide how you are going to use your powers.  Are you a good super hero who is selfless and willing to sacrifice everything for the people or are you a evil super hero who only wants power and is willing to kill for it?  This is the underline theme to the inFAMOUS series as both games will constantly ask you to make a choice between being good and evil.  Unfortunately for both games the decisions are extremely polarized and the benefits are seen right away, unlike other “choose your destiny” games like Mass Effect where it may be quite some time before you realize the benefits or problems from your choices.

Likes:  As I said before the powers easily steal the show.  It is extremely satisfying to blast enemies away with your electrical powers and a ton of fun to fly and zip along power lines.  The graphical difference between the two games shows a lot more detail when frying enemies in 2 as well ie seeing the skeletons of some enemies as you electrocute them.   The story is very basic but it still did a decent job (especially in 1 to keep you guessing…a little).

Dislikes:  Ok most of this is going to be gripes between 1 and 2 as they made some pretty out there changes.  First off any time you change voice actors on the main character you may want to try to match them better or explain why.  I also hated the fact that “the beast” just destroys Empire city (the map of the first game) right off the bat, I’m sure its meant to make me hate the beast but all it really did was hate all the extra time I spent in Empire City trying to save it.  Second,  Just like how Eric hates it when a game takes away your powers, I hate it when they add monsters for no reason in a game.  inFAMOUS 1 was a comic book style story, where you and the enemies had powers and you had to fight to save the public from the enemies wrath.  In 2 they add swamp monsters to the mix now I understand where they came from and how they got there but it just feels like such a cheap tactic to add extra enemies, especially since 1 didnt have any.  I also really hated it when you find out there are monsters in the first place, nobody cared.  It was like”oh yeah, we have swamp monsters as big as buildings here so?”  In inFAMOUS 1 people were locked in Empire City but in inFAMOUS 2 they are not…so why the fuck are they sticking around getting eaten by swamp monsters?

All in all I did like the series, there was just something about it that wasn’t  appealing to me.  Kinda like in Arrested Development when Lindsay is trying to hit on other men but keeps failing.   inFAMOUS is beautiful, fun and a good long game….but I still don’t really want to buy it a drink.

As of right now there is even talks of inFAMOUS 3 so if you have any interest on playing a electrical superhero now is the time to get caught up.

On to the next game as the Summer of Jason continues!