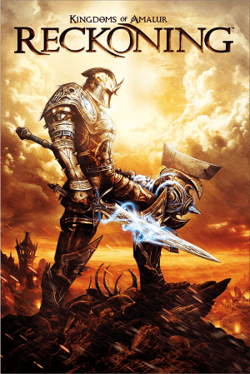 Whew, where do I begin?  This game was quite possibly the longest 93 hours of my gaming life and once it was all said and done I still don’t know if it was the best or the worst.  With a hearty mix of Skyrim and W.o.W. this game almost seemed too perfect and right up my alley.

Reckoning is really a simple game.  At its roots, it is a basic a quest based adventure  where you are given new life in this world as the first successful resurrection of a human, the only problem is, you don’t remember your past or how you died.  This is ultimately the main cause for everything in the game and “fate” seems to be the focus of everything else, but you are the only one who is fate-less because you have already died once.  This “fatelessness” is what allows you to become more powerfully than anyone could image. Sounds great right well lets jump right on in.

Gameplay:  Similar to Skyrim, the game is 90% side and faction quests.  Some even taking even longer and  have a more epic story line than the actual main quest.  The only real down side here is that they all have a very, VERY similar theme…Fate.  I know that this is the “main” aspect of the game but they really focus on hitting you with it over and over.  Obviously there are plenty of fetch quests as well and other odd requests to do silly things for minimal reward.   Unlike Skyrim the game is in 3rd person aspect and the two attack buttons can be switched out for different types of weapons at any time.  Sword, great-sword, staff, scepter, chakrams, hammers, faeblades, knives and bows and arrows definitely keep the combat fresh (or at least as long as possible).  With so many choices you can really fine tune how you like you play and can actually pull of some rather nice combos, even better as you level up.  Some of my favorite moments in combat is when I can pull of a huge combo using both selected weapons and both active magic attacks, because of this the combat in Reckoning was waaaay better than Skyrim.

Graphics:  First thing I noticed is how similar the art style is to W.o.W.  the overly colorful characters, armor, and world is everywhere, and to be honest, after Skyrim it is a welcome change.  Once the initial wow factor wears off the game starts to show its true colors as a dated game that barely made it to post production.  I wouldn’t hold that against it too much as you are not playing this game just for the graphics.

Sound:  The voice acting is well done, although everyone seems to have the same type of accent, but that is easy to get over.  Outside of the voice acting the sound was the buggiest aspect of Reckoning.  First off there isn’t a lot of music and sometimes it will stop for no reason and just have silence while you run around opening chests and killing things.  Second, forget about timing, doors, some attacks and even voices would sometimes (read almost all the time) come well after the action.  Its not that big a deal but its really weird watching a door open then hearing it open.  Combat would also be whisper quite one second and then right in your face loud, really annoying if you are playing the game late at night.

Side Quests:  There are a shit ton of extra side quests to do and the world is huge so its easy to take on all of these the only problem is that most of them are dull and the rewards are almost never worth it. (more about this later).  Also just like Skyrim some side quests were a bit more fun than the actual main story.  I really enjoyed the House of ballads and the House of Sorrows quest lines.  Although predictable they both showcased really well what the main aspect of this game is…Fate! Reckoning also had a fantastic crafting setup with alchemy, Sagecrafting and of course Blacksmithing.  Both Alchemy and Sagecrafting are useless in later levels (just like any game that has Alchemy) so I will mostly talk about Blacksmithing.  What really set Kingdoms of Amalur Reckoning aside for me was the fact that you could “salvage” any piece of armor or weapon and use the salvaged components to build something even better.  This was an awesome/awful feature as I would always look for better and better gear to salvage so I could make the most epic gear.  On the negative side it meant that all pre-made “Epic” gear was worthless to me 99% of the time.  So I could find a totally bitching helmet in some cave but the stats on my cloth hat were still better….ugh.

Gripes:   You better hold on Nancy, as I got quite the list for you.

I’m sure If I sat here long enough I could think of more but that’s not the point.  All in all the game was fun enough to warrant me doing EVERYTHING (got another Platinum trophy under my belt)  even when I was ready for the game to end I still found myself exploring and looting every nook and cranny.  Perhaps I took this game too far or took it too seriously,  if I had just gone through the game casually would I have had a better time?  Who knows, what I do know is that I there is no reason for my to play this game ever again but I will remember my time with it fondly……..ugh

2 thoughts on “Kingdoms of Amalur: Reckoning”