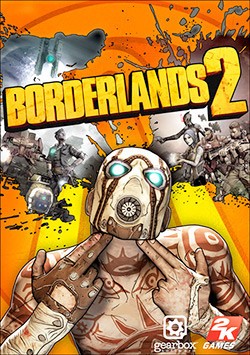 Time: Roughly 50 hours for one play through (all side quests).

If you do not plan on reading any further just get this one thing straight..This.Game.Is.Awesome!  Now if you are wondering how I get to that conclusion, well sir, you need to read MOAR.

If you have not played the original Borderlands yet, please do so, you can get the game for $20, and unless you are one of the two types of people who wouldn’t like this game, its well worth it (more on the two types later).  Borderlands 2 is a one of a kind game where they take an action FPS toss in a few RPG elements and add one hell of an awesome story.  There are so many things done right about this game I could probably gush for ever about it and am dangerously close to fanboi-ing all over it.

Game play:  Lets get one thing straight, Borderlands 2 follows a very simple system: SHOOT,KILL,LOOT, REPEAT!  Lets be honest here, Borderlands 2 is a very basic game in itself, when viewed from afar, and only once you open this “Pandora’s box” (puns) do you find how insane it can be.   Where Borderlands 2 really shines is in the amazing job Gearbox did building this world, characters and loot, to make it worth a damn killing a billion bandits over and over again.  Long story short, if you enjoyed the first game you are going to LOVE the second.  Throughout the entire game you will be in a constant struggle to improve…  Improve your Guns, improve your mods, improve your level and improve your Badass rank.  This constant goal of “forever” improvement keeps a lot of the tedium at bay, because lets face it, nothing beats killing a dood with a head shot for the millionth time, than killing a dood with a head shot for the millionth with more explosions.

Graphics:  Borderlands 2 of course keeps with the cell shading style of the first one only this time everything is definitely more crisp or detailed.  Its no longer a pain to get close to something only to find you are now staring at a blurry mess.  Also the draw distance seems to be a lot better as sniping from afar is easier and more satisfying.  I will say however that on the Xbox the popup feels a little delayed, its nothing noticeable while playing the game but when you look closely you will see things slowly get sharper.  Again nothing major but something to point out.

Sound:  Here is easily where the game stands out from other FPS/RPG titles out there the voice acting in this game is top notch if there is any reason to play this game, it’s solely for the story or crazy side quests alone.  I, no joke, laughed out loud while playing this game more than a few times.  The music is spot on again and plays awesome contrast to the games “light-hearted” visuals (Minus all the murder).

Overall:  Seriously this game is just plain fun.  Obviously, if you go looking for problems you are going to find them but just enjoy the game and enjoy what you are really doing here looting and gunning.  Here are some of my fave “Complaints” about the game and my responses, not that it matters to anybody.

“The game is just an arrow comparison engine.”  Okay, so your problem is that the games loot isn’t more complex than just comparing stats.  I can sympathize with this, but you are forgetting what the main aspect of the game is….looting and killing! You will never find an “end all perfect” gun, there will always be a better (anything) out there.  Unlike other loot games ie Diablo, where there are certain armor/weapon sets you look for or farm.

“Too much/little FPS/RPG elements in my game”  This is what I was talking about earlier.  There are only 2 types of people who probably wont like Borderlands, now if you are one of these people its not a bad thing its just you may want to wait on BL2 or pick up the first one as a trial.  Type #1: If you are a hardcore FPS fan and the only games you own are COD and Madden you may not like Borderlands 2.  Type #2: If  you are a hardcore RPG/JRPG fan and only like the Disgaea series  you may not like Borderlands 2.  Everybody else should go out and join in on the fun.

“There are just too many guns.”  ARE YOU FUCKING KIDDING ME!?! Do you know what game you are playing?  One of the main advertising points to BL2 was the fact that there are a “BAZILLION GUNS” seriously if this is your problem you are doing it wrong, and by it I mean gaming.  God, just, stupid.

Gripes: Yeah I still got em even though I loved the game.

Lastly, if there is one thing I do like is the fact that there is soooo much extra stuff to find and do.  There are so many hidden places and Easter eggs that without looking them all up online will take forever to find and the Badass system ensures that you are never “maxed out”.  I am looking forward to playing this game a billion times (as I did the first), until the eventual Borderlands 3 or Borderworlds?